An Appetite For Food And Drink Investments

Investors in Beyond Meat’s IPO have seen the price soar from $25 to $161, with a secondary offering on the way. Its rival, Impossible Foods, is rumored to be exploring an IPO as well, after raising $300M this past spring.

Just this past week, DoorDash acquired Caviar for $410M. Kura Sushi, a chain of sushi restaurants, just raised $41M in its IPO. Taco Bell is currently offering the Steak Ranch Reaper Fries Burrito. It’s safe to say the food industry is as hot as the plates at Ruth’s Chris. And as I’ve discussed previously here, the Food and Drink industry leads the way currently with commitments. So this week, let’s jump into the data on the Food and Drink Industry and see where we’re at.

Starting from a big picture view, there are 177 offerings in my data that fall into the “Food and Drink” Category. The majority of these offerings are listed on 3 platforms – Wefunder, NextSeed, and StartEngine. 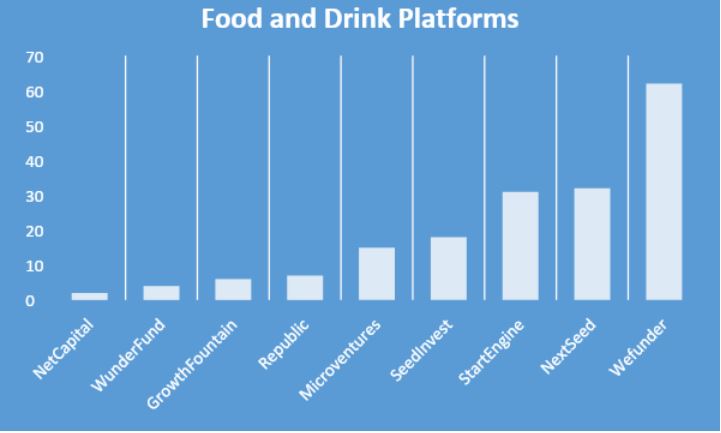 Of these 177 offerings, 129 have met or exceeded their target offering on the last day of inclusion in our sample, a 73% success rate.

The success rate of these offerings is an impressive feat, considering that the average offering is looking to raise at least $91K, with 62 offering seeking $100K or more. This is almost $50K more than the trend I have shown previously with average offerings looking to raise around $40K. This is potentially attributable to some of the large amounts of overhead some of the restaurants offerings face when starting up, which is why they are raising funds in the first place.

And these offerings that succeed clear their hurdle with room to spare, averaging $244K per offering (with an average minimum target of $83K). They also often get off to a good start, raising $35K during the first 3 days of the offering. I’ll also take a moment here to give serious props to Modern Times, who raised over $1M during their first week on Wefunder back in April. Joining them in the $1M club were 5 other offerings, just not in as short a window (seriously, impressive work Modern Times).

These offerings are also often modest in their valuations, with an average valuation of just under $10M ($9.88M). With the activity going on in the industry right now, the price is right to potentially get in and make a solid return if one of these firms gets acquired.

Food and Drink seems to be where it’s at right now, and for good reason. There’s countless ways to order food and have it delivered, new restaurants opening up left and right, and more craft breweries and distilleries than you can shake a stick at (not saying that’s a bad thing). This growth provides a number of investment opportunities, and these companies are turning to outlets like Reg CF to get their local customers involved. KingsCrowd currently has a Food and Drink offering as one of its Top Deals, Vegan Fine Foods, if you’re interested in getting your feet wet.

And since we’re talking about Food and Drink here, I’ll close with a shout out to Unity Vibration, a local company for me here in Ann Arbor, just a few miles away over in Ypsilanti, Michigan. KingsCrowd featured them here a while back as well as a Deal to Watch, and their Bourbon Peach Ale is something else.

What is Venture Capital?

Investors in Beyond Meat’s IPO have seen the… ...

Investors in Beyond Meat’s IPO have seen the… ...