The Convesio team has been selected as a “Top Deal” by KingsCrowd. This distinction is reserved for deals selected into the top 10% of our due diligence funnel. If you have questions regarding our deal diligence and selection methodology, please reach out to hello@kingscrowd.com.

WordPress is a streamlined content management system that developers can use to build and manage a website, without needing to learn time-consuming programming languages. A massive 30%+ of the entire internet is composed of websites built with WordPress, many of which are big-name companies.

In order for a company to get their site up and running, they must go through a host to maintain and monitor the website. Host agencies, like GoDaddy and Bluehost are responsible for any issues that arise regarding the site. They optimize performance and site accessibility, often through the use of plugins. These agencies use cloud-based servers, renting computing power from Amazon Web Services or Microsoft Azure to meet their clients’ needs.

The most popular mode of WordPress hosting is through shared servers. This means the client securely shares a large chunk of computing power with a bunch of other websites. It’s the most affordable option, but unfortunately, servers have limits. These servers have a single point of failure, meaning if one website goes down, the entire server could go down. There’s also a limit to the amount of traffic on the entire server.

Dedicated hosting allows a user to have full control over the server, with more user freedoms like the ability to control the operating system. Yet, these servers are more expensive with fixed resources, require a server administrator to operate it, and, similar to the shared hosting servers, are slow to scale.

Virtual Private Servers are another method. These are faster to scale, and the server is only shared with a handful of other websites. However, there still exists a single point of failure that threatens all sites on the server.

These limited options make the life of a website agency worker incredibly difficult, as they are constantly worrying about their clients’ vulnerable sites crashing at a moment’s notice.

From a client standpoint, inconsistent website uptime can cost $137-$427 per minute. Performance issues can tank sales. An unscalable server could cost thousands should a site encounter more traffic than purchased. And poor security can cost an average of $2500 per hack or data breach.

The result is faster and more protected websites that also cost less and are easy to manage. The software was built from the ground up from 4 years of research and development. Convesio claims that these sites outperform typical hosting providers, reducing client complaints and streamlining workflows for agencies. 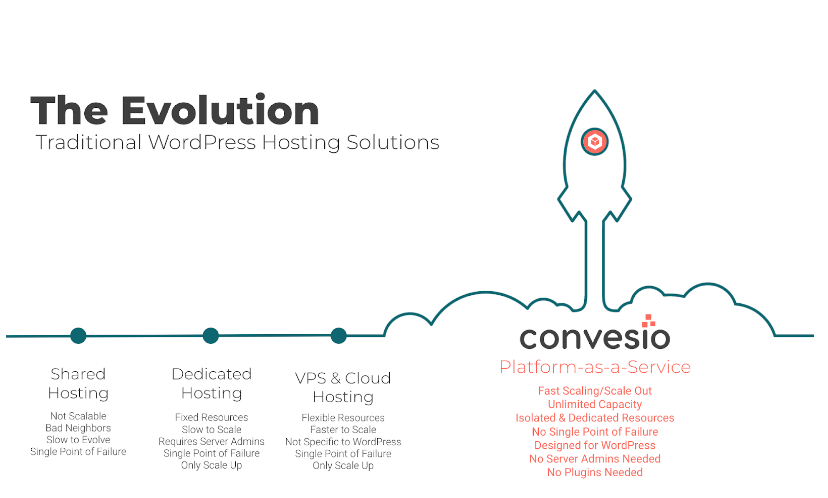 Convesio takes around a minute to create a WordPress site, without host agencies needing to configure plugins to provide the site with much needed performance capabilities. Instead, the host agent simply adds the website name, manages it from an easy-to-use dashboard, and allows the software to maintain it.

In terms of capabilities, the platform creates automated backups of each version of the site. A Secure Sockets Layer certificate creates an encrypted environment for the server to ensure security.

Convesio uses Docker containers, which allow the user to run WordPress similar to an operating system, in the sense that you can call upon certain plugins or applications when they are needed. Essentially, the computer hosting the server is being split into smaller components to act as separate servers or computers. This way, copies of the website are being held in each container. This approach results in a myriad of benefits.

Furthermore, if one instance of a given site goes down, the entire server does not suffer as a result. This means there are zero points of total failure, allowing the website to stay up nonstop.

In addition, the model is entirely scalable in that when there is high traffic, the platform splits it across all containers, or instances of the website, in order to accommodate for it. This is known as load balancing. 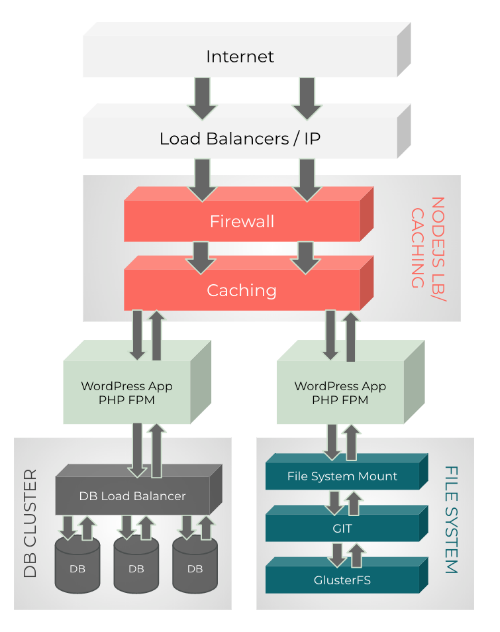 Convesio has auto-scaling capabilities, meaning it can put more containers into action should traffic increase, seamlessly expanding the capacity of the website.

Fast-catching capabilities ensure all information is up to date, while the performance of the site is improved. A clustered database powered by MySQL promotes reliability of the site. Convesio also constantly monitors the site status/ analytics, and will immediately re-launch the site should it shut down (self-healing).

As previously stated, WordPress runs a significant portion of the internet: approximately 75M websites. Their share of the global content management system market is 59.7%.

The managed hosting market size is projected to increase to $81B by 2020 worldwide. A 18% CAGR is expected. Web and app hosting (shared, VPS, and dedicated hosting) will be $27.9B by 2020. This is a huge market opportunity for Convesio.

Convesio sees a few key companies as competitors. For example, WPEngine claims to deliver the best word press hosting and developer experience with speed, scalability, and security. It is one of the largest WordPress hosting companies, but consists of outdated technology and an underdeveloped UI.

Flywheel claims to offer similar features to Convesio, also providing the user with WordPress experts for the user to communicate with should they need it. Not only does it market to host agencies, it also supports individual freelancers or those starting out. Multiple users can collaborate by sharing sites with other members on their team. The Flywheel starter plan costs around $19/mo, while its agency deal is $218/mo. 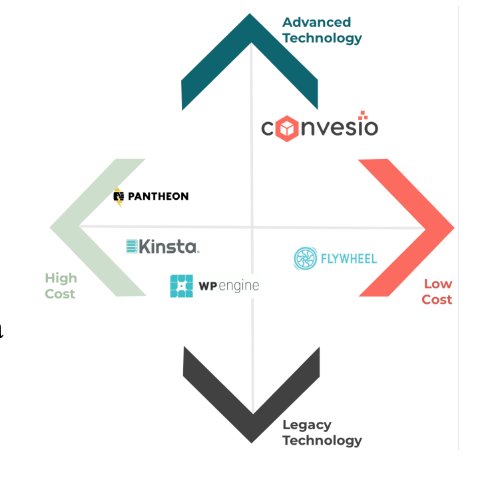 Kinsta and Pantheon both claim to offer secure, fast, and safe solutions to WordPress hosting. Yet, Kinsta seems to be less user friendly, while Pantheon has an outrageously high pricing scheme.

Convesio is unique in that they are the first WordPress platform that enables site scaling at a high availability, tailored to hosting agencies and companies. This enables a uniquely flexible pricing system. Also, the ability to self-heal its own issues, while maintaining high performance sites is a strong plus for hosting agencies.

Founder and CEO Thomas Fanelli was initially a combat engineer in the US Army. He later transitioned into business, where he served as the VP of Sales and Marketing at Coastal Computer Corporation. Fanelli was then an Instructor and Audio Engineer at Unity Gain Recording Institute, and then a technical Director at Riverside Church. He served as Vice President for four other companies before starting Convesio. He has 15 years of experience in agencies that work to scale website platforms and hosting. He sought to develop a solution to the problems in the industry he witnessed firsthand. In addition, Fanelli currently works at Aptly, a real estate tech firm that manages property data.

Chief Architect & Co-Founder Dyutiman Chakraborty has a business degree from St. Xaviers College in Kolkata India. He was a Senior Software Developer for Think Design, and then acted as a self-employed software engineer, doing private contracting projects. He can program in 9 languages, and knows 16+ UI / Markup Languages.

Elizabeth Bochner, Co-Founder & COO, worked as a Relationship Manager and Project Manager at RealPage, Inc. After Fanelli, Bochner moved to Deluxe Corporation, where she served as the Director of Product Management Strategy & Operations. She is now fully committed to Convesio.

Convesio is a Top Deal. With a team that has spent their career working within the problem they are solving, we think they are nicely positioned to service the needs of their customers while becoming a market leader in flexible web hosting. The giants in the market such as GoDaddy that have structured their companies to service clients in a very rigid way do not seem positioned to easily adapt to what it is Convesio is bringing to market.

We think this providesa nice market entry point for the organization to exploit a real need amongst customers being serviced by these old providers. The flexibly pricing structure and tech stack all speak to a better overall market solution and one that could be attractive to the likes of a GoDaddy down the road if it proves to be the more fruitful way to win customers over.

Convesio appears to be a target for future acquisition in the web hosting space and has a strong early go-to-market plan by targeting web hosting agencies that have hundreds of clients that could benefit from a service like this. The prospects for this organization look promising especially at the current $5.5M valuation cap.