The ElectroSpit team has been selected as a “Deal to Watch” by KingsCrowd. This distinction is reserved for deals selected into the top 10%-20% of our due diligence funnel. If you have questions regarding our deal diligence and selection methodology, please reach out to hello@kingscrowd.com.

The music industry is global in scope.  Across 180 countries, people stream more than 35 billion tracks every year, accounting for 837 consecutive years worth of music every single day.  Few people in this world are not touched by music in some way, and while the industry itself is competitive and generally focuses on the distribution of content, a sizable portion of the space is dedicated to the creation of not only standard musical equipment and other devices, but to new innovations that can either render new sounds or improve how old ones have been expressed.

This is where ElectroSpit enters the fray with its ESX-1 talk box.  Dating back to at least 1939, the talk box is a device aimed at modifying the sounds of various instruments and voices, using changes in frequency to do so.  ElectroSpit’s founders believe that the ESX-1, the first easy electronic device to do so with concert-quality performance, can challenge the incumbent devices on the market and open the door to attractive returns for investors in the long run.  Not only does the firm aspire to sell a top-performing physical product, its app and anticipated game can open the door to even greater opportunities down the road.

The talk box is an old technology.  In its simplest form, the device connects with an instrument, directs said instrument’s sound through a tube into the musician’s mouth, and allows the musician to shape the sound(s) desired by moving their mouth accordingly.  As you can see in the image below, these devices are often bulky, they require time to set up, and in a space as old and well-established as this, it’s difficult to differentiate. 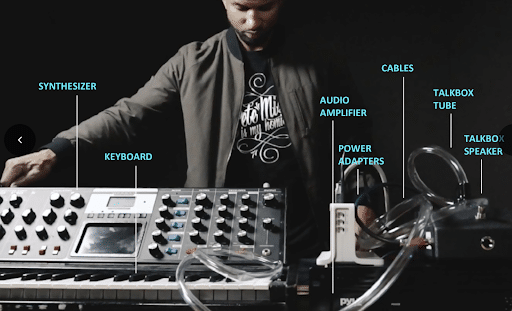 To illustrate just how difficult it is to set up and use a talk box, prospective investors need only watch the video shown in this link.  This multi-step process requires time and experience to get right, and even if the musician does set up the device, using it while on stage can be cumbersome if the musician is standing and moving around.

To address the shortcomings of existing technology out there today, Bosco Kante and Maya Kante decided to found ElectroSpit and to pioneer the company’s first technology: the ESX-1.  Instead of the complex patchwork of technologies that go into assembling a traditional talk box, the ESX-1 is a single device that can hang on its user’s neck, resembling, if you will, a pair of large headphones.  The device can then hook up to a mobile phone or some other compatible electronic configuration.

Once connected (let’s assume in this case to a mobile phone or tablet), the app built for the system allows the user to adjust the pitch and other settings as he or she deems fit, giving them the same range of options as, if not more than, what a traditional talk box would.  The price, as listed on the website, is currently $995, but for investors who allocate $500 or more as part of the firm’s current crowd raise, they will receive it as a reward.

In terms of monetization, management appears to have a few things in the works.  Actual manufacture began in July of 2019, with the units being produced today being provided to the crowdfunding community that originally supported the firm’s first major raise.  However, the ultimate goal is to sell these units to non-investors. That said, there are other ways to monetize this concept. For starters, the company does intend to offer its mobile app to everybody who pre-orders one of its units, but for those who don’t pre-order, they intend to charge $24.99 per download.

In the future, another target for the company is a game they have tentatively called ElectroJam.  Through an app, users will be able to play with existing sounds, create their own, and create jam sessions with other users of the app all across the world where they can compete against one another.  The intended launch date for it is 2020 (though elsewhere in their documentation, they indicated this might be in 2022 instead) and, as matters stand today, the company hopes to charge $9.99 per month for access to the platform.  In addition to this, ElectroSpit hopes to eventually launch the ElectroDJ-1, a similar device that can connect with a user’s smart phone that will enable them to participate in a mobile DJ-ing experience. It is likely that the monetization of this device will be similar to the firm’s plans for the ESX-1.

The market in which the ESX-1 will compete is so small, and so niche, that it is difficult to measure. Perhaps the best way to look at it is to look at the FX, SYNTHS, and Controllers space, which in 2017 was $405 million in size. This represents a sub-segment of the $7.4 billion music products industry. Though the ESX-1 will undoubtedly reach a broader audience than that (with opportunities to touch in the recreational side of music due to its low price point and its app), the biggest users will almost certainly be major musicians and any group that seeks to move in that direction.

When it comes to its app and ElectroJam game, the picture is a little different. In 2018, the global gaming industry was estimated to be about $43.8 billion in size. Historically speaking, there have been industry-leading music-based games like Guitar Hero and similar offerings, so it’s not unreasonable to think that the company could have significant appeal if it markets its product appropriately. With a number of industry names already using or having tested and enjoyed the ESX-1, and with its product already making it onto several news sources, it’s probable the firm could keep the traction going.

The management team leading ElectroSpit is, thus far, quite small.  As you can see in the table below, it really only consists at this time of the co-founders of the firm, Bosco and Maya Kante.  This might be a smaller team than some investors would like to see, but it is worth mentioning that both of them have relevant experience.  Bosco is a Grammy-winning producer and has stage experience with talk boxes, plus he holds a Bachelor’s degree in Mechanical Engineering, while Maya has marketing experience for online, offline, and live events.  She holds a degree in Sociology and was integral in setting up and managing the company’s successful Kickstarter campaign last year. 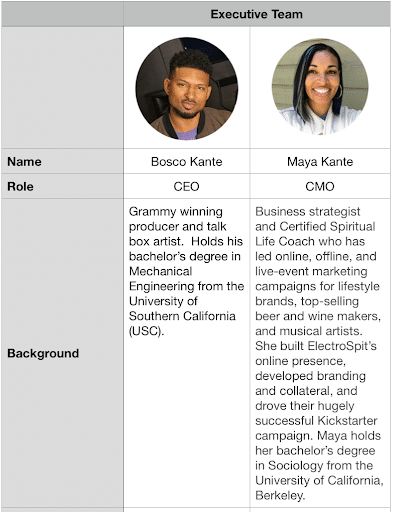 This particular transaction is not terribly complex.  According to the filing documents provided by management, ElectroSpit is looking to raise a minimum of $25,000, but may raise up to $107,000.  In exchange for these proceeds, investors will receive a crowd note that will convert at a 20% discount to the next round’s valuation (assuming a $1 million qualified raise, at which point management can elect a conversion), subject to a valuation cap of $5 million.  “Major Shareholders” will be those who invested at least $25,000 into the business and they will end up with less-limited voting rights, while all other investors will have their rights limited through the terms of the preferred units their crowd notes will convert into.  The minimum investment accepted by management from any one investors will be $100. As this analysis was typed, the total pledged to the deal was $13,650 from 38 individual investors.

ElectroSpit and its technology is fascinating and it looks to be an excellent and long-awaited step forward in the music space.  Given that the company is already in its production phase and has a long list of professionals in its space that have already expressed a deep interest in the product, it’s an enticing prospect to consider.  If the firm operated in a larger industry and if it had moved away from catching up on its past commitments to deliver the units it pledged as part of its Kickstarter instead of relying on this current raise to play catch-up, and if it had a more thorough management team and/or advisors in place, it would certainly have received a Top Deal rating.

This is especially true when you consider the ingenuity of all that management has accomplished.  The fact that these limiters are in place, though, warrant this transaction to be rated a Deal To Watch, which places it just beneath the Top Deals, but still encompassing the top 10% to 20% of opportunities we look at.  On the whole, ElectroSpit has a great idea, has demonstrated excellent traction, and has a path forward that can create multiple revenue (and hopefully, in due time, profit) streams for its investors. If it can overcome its weaknesses, it could go on to become a truly great opportunity that investors might kick themselves for missing.