Lenmo has been selected as a “Deal To Watch” by KingsCrowd. This distinction is reserved for deals selected into the ​top 10% of our deal diligence funnel​. If you have questions regarding our deal diligence and selection methodology, please reach out to ​hello@kingscrowd.com​.

The personal loan industry is a hot area for technology startups. It’s a large and rapidly-growing space, plagued by outdated technology and processes.  But for the companies that find the right recipe, it can be wildly profitable. In the search for opportunity, companies like Lenmo have come into existence. Lenmo’s own take on this market is interesting and despite its short-lived history, it has demonstrated some success on its platform. Initial loan amounts so far are small, but if the company can scale this up over time, it could position itself as a solid niche player in the space.

There exist two primary problems that Lenmo is attempting to address.  For starters, there are only a limited number of borrowing options out there for consumers.  This is especially true for those looking to tap small loan amounts. The second is that there’s a lack of short-term investing options for companies seeking out high returns. The second point made by management is more subjective in nature.  After all, “high returns” are relative. On the first point, though, the company is correct. Nearly 40% of American adults cannot afford a $400 emergency expense.  Also, of the 162 million non-prime borrowers the Federal Reserve Board counted in 2017, 140 million aren’t having their borrowing needs met. The bottom 12 million non-prime borrowers resort to the $40 billion payday loan industry.  Meanwhile, the top 10 million consumers tap personal loans worth $80 billion.  This leaves a significant chunk of borrowers stuck in the middle, unable to receive the cash they sometimes need.

Lenmo’s solution to this systemic issue is to create an app where consumers can put their financial information on (anonymously).  They then pick the dollar amount they are looking to borrow, and select the term over which they want to pay those loans back.  A slate of interest rate options, competitively curated for them, is then made available for them to pick from. Although lenders must compete with one another on the app, they are granted unparalleled flexibility in deciding who to give loans to.

For borrowers, the value proposition is rather straightforward.  The benefits to lenders, though, cannot be overstated. Lenmo Enterprise operates as a digital end-to-end solution aimed at making investing in the small loan market easy. The only fees a company pays to be on the platform are a monthly charge for each user on it of $84.99.  They also pay a 1% fee on the principal of each loan issued, or $3 per loan, whichever is greater. It’s worth noting that this fee structure is identical to what Lenmo charges the borrowers on the platform, minus the monthly charge. Through its system, the company also provides lenders with access to data.  This makes it easier to optimize their investment portfolios. It also streamlines the lending process so that there’s no cumbersome paperwork to deal with.

Data is valuable to more than just the ecosystem’s lenders. Another revenue channel for Lenmo involves content-sharing with “data partners” through its API. In its marketing documents, Lenmo stated that these arrangements will involve a 50/50 revenue split for it and its partners.

Since its launch on September 17th of 2018, Lenmo has grown rapidly. Today, the company has more than 90,000 registered users on its platform. Unfortunately, only 3,900 of these are active, but the company did boast that it has facilitated the origination of more than 4,900 loans.  These carry an aggregate value exceeding $1.20 million. On the Lenmo Enterprise side, the company has 45 different companies signed up, plus it has a further 75 companies in the pipeline. Specifics surrounding these signups have not been provided, but the more investors on the platform, the better.

The personal loan market is significant in size. Last year, 21.1 million personal loans were outstanding. These carried an aggregate value of $138 billion, or roughly $6,500 apiece, up 17% from the $118 billion a year earlier.  This stacks up against the average size of a loan on Lenmo of nearly $250, but that goes to show how much of a niche player the company is aiming to become.  As the image below illustrates, the market now is higher than at any point over at least the past decade. 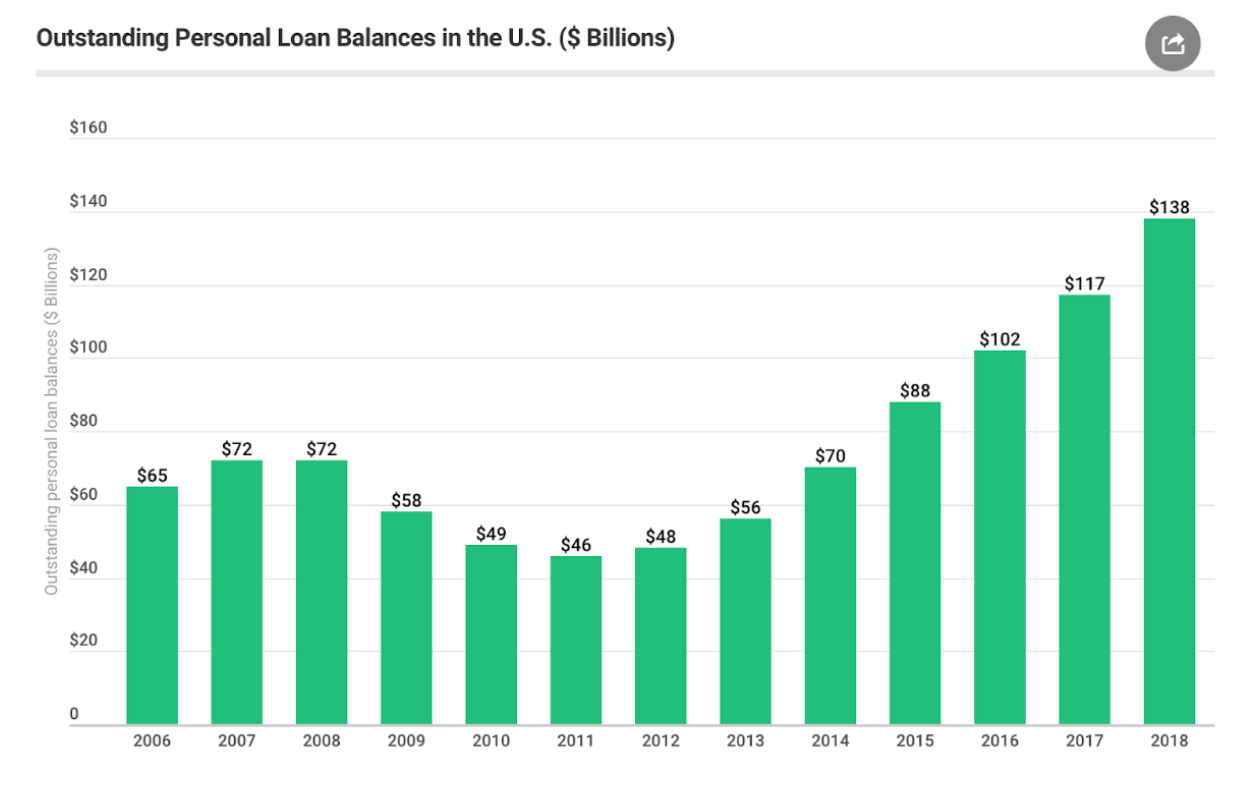 It may seem odd that such a large and well-founded industry in a developed nation like the US is growing so quickly.  This can be chalked up to the proliferation of game-changing technology and services available to much of society. Last year, 38% of all personal loans given out nationwide were issued by financial technology firms. This was up from only 5% seen in 2013. Over the same five-year window, the market share of banks in this space shrank from 40% to 28%.  The market share of credit unions over the same period dropped from 31% to 21%. In both cases, the approximate value of loans going through those parties remained unchanged.  This shows that new technologies are opening the door for new borrowers, not cannibalizing existing clients. 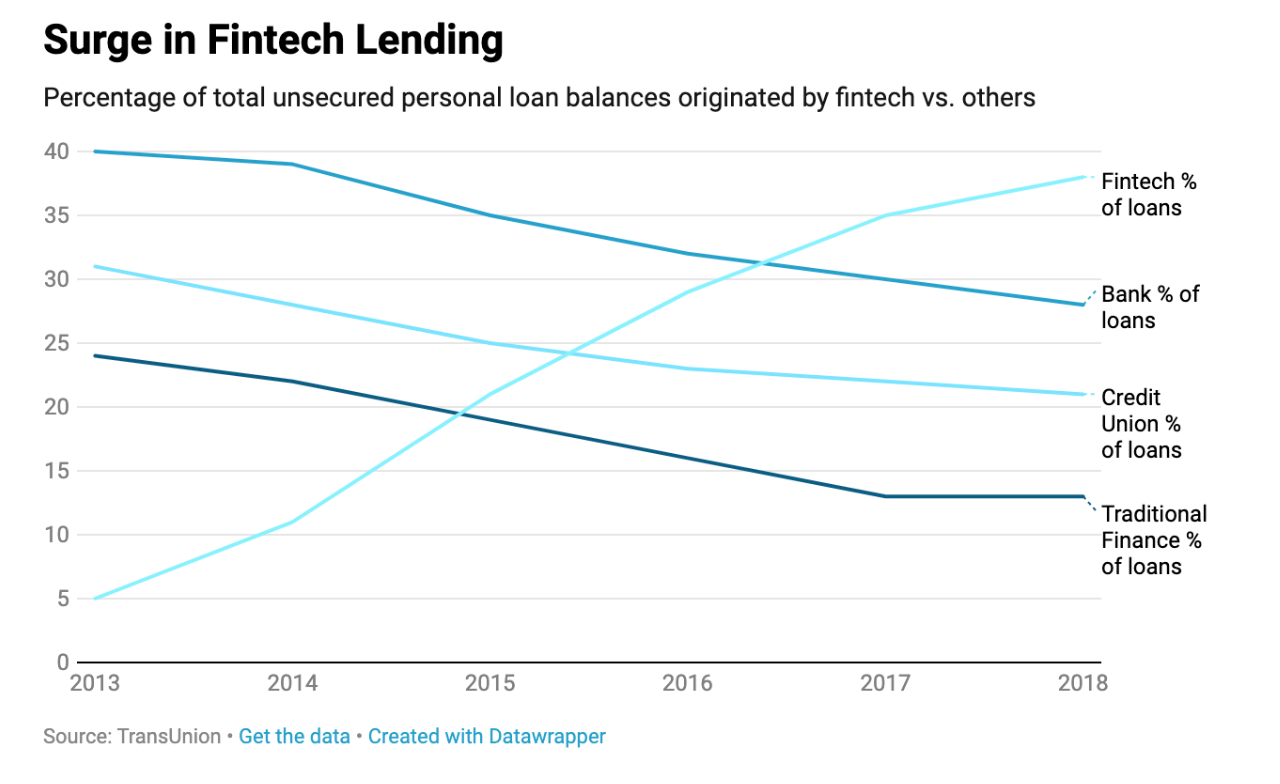 How large this space will grow is hard to guess, but LendingClub, one of the most significant peer-to-peer lending companies today, has an idea.  The firm believes that the TAM (total addressable market) is around $445 billion worth of loans per year. This provides significant upside potential, not only for Lenmo but for all innovative players in the space.

Like Lending Club, the biggest opportunity for Lenmo will probably be to rely on financial institutions for the loans its users want. Although LendingClub established itself as a peer-to-peer lending platform, only 5% of its loans come from self-directed retail investors.  Another 16% fall under the category of “managed accounts”. By comparison, 45% of loan originations are attributable to banks, 20% are from “other institutions”, and the remaining 13% are loans originated by LendingClub itself. With its sights set on financial institutions out of the gate, Lenmo appears to be on the right page. 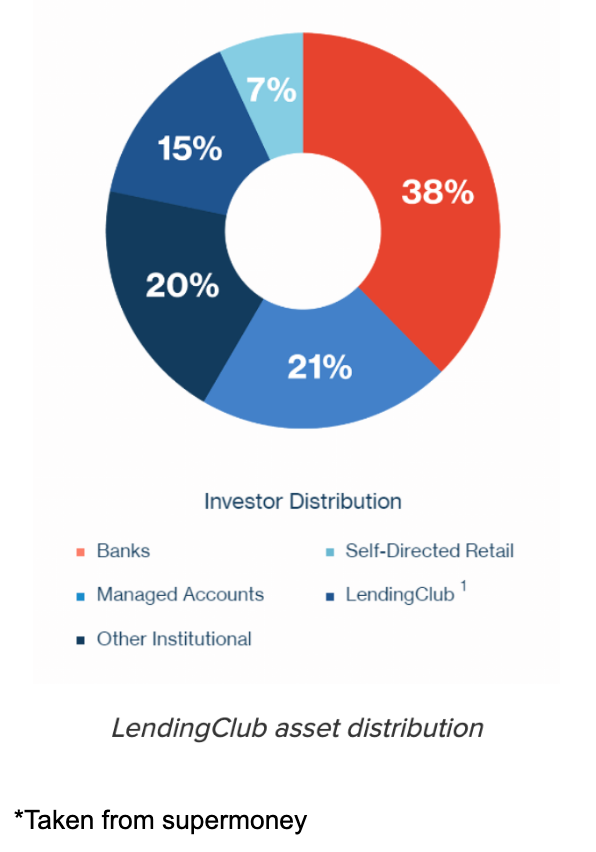 In this current capital raise, Lenmo is attempting to collect investments worth $3 million. So far, it has received commitments of $107,508, which is far from the $700,000 minimum it has to have to close the round. The minimum amount an investor can allocate toward the deal is $1,000. Investors in the firm will receive preferred units that may converted, on a one-to-one basis, at the option of the holder into common shares. Under limited circumstances, preferred investors will be able to vote on company issues, but this is limited. The pre-money valuation of the company as it stands in this offering is $10 million.

For its size, Lenmo has a large team. Including its founders, it has 11 employees, plus 7 investors/advisors. Its core team, though, consists of its 3 founders: Mark Maurice, Lenmo’s CEO, John Hakim, the company’s CTO, and Kyo Kim, its Head of Design. As the company’s CEO, Mark is focused on strategic planning and execution for the business. He has over 10 years of development and management experience across several firms (including startups).  Mark also holds an undergraduate degree in Engineering, an MBA from London, and he is currently a PhD candidate. John leads the engineering and operations teams. He is responsible for managing the business’s development, as well as covering the planning and evolution of the product roadmap. John has an Engineering degree and has been a Lead Engineer at Motorola for the last 9 years. There he has worked on high-profile software projects for the company. Kyo has focused his efforts on laying out and improving the user experience side of the business. His work experience includes designing for Lyft and Capital One.

The Lenmo team has been rated a “Deal To Watch”. The company’s business model is interesting, initial traction is appealing, and the industry in which it operates is attractive, large, and growing. All of these are bullish indicators for the firm and if management can execute optimally, the upside could be significant. This does not mean, though, that Lenmo is without its share of risks. Despite having a short operating history, the company’s net loss in 2018 was $371,622, and its operating cash outflows totaled $200,468. That’s a significant amount of burn for a company that is so young and that generated paltry sales of only $13,435. Another downside for investors is that only a small portion (roughly 4.3%) of the company’s registered users are active.  In addition, no more than 5.4% took out loans since registering. These are concerns investors should keep in mind. But if management can demonstrate improvement in these areas, the future could look up for the business.