NuuRez has been selected as a “Deal to Watch” by KingsCrowd. This distinction is reserved for deals selected into the top 10%-20% of our due diligence funnel. If you have questions regarding our deal diligence and selection methodology, please reach out to hello@kingscrowd.com.

The sharing economy continues to expand. Some forecasts put the rate of growth at between two and four times the growth exhibited by the global economy. This growth has been driven by a mixture of things. The rise of the internet has made information pass between individuals instantly. This has served to effectively shrink the world. Demographics have also contributed to this paradigm shift. With today’s younger generations negatively-affected by poor job prospects, high home prices, and overwhelming student loans. Add to this the fact that people are traveling now more than ever, and it only makes sense for the sharing industry to thrive. Its increased flexibility and variable cost structure is the perfect answer for this confluence of attributes that define our modern era.

Housing costs are high. Over the past decade, the median price paid for a new home has risen 38.2%. Cherry-picking the data can get you even higher gains. Add to this the plethora of other issues plaguing Millennials, and you arrive at some interesting (and depressing results). For instance, according to a Pew Research study published in 2016, a full 32.1% of people aged 18 to 34 are currently living at home with their parents. This is up significantly from just 20% of people in 1960 and is the highest seen since the 1940s. Another problem worth mentioning relates to temporary residency. Americans (and other people globally) travel more each year than any year prior. This makes finding short-term accommodations a challenge. Hotels are always an option, but they can be costly. This is especially when staying for more than a few nights, and in the growing gig economy, affordable accommodations are in high demand.

Recognizing the problems facing today’s youth, Airbnb set itself up as a solution. But it proved to be only a partial solution. The company finds quick and affordable accommodations for people. Particularly for those who are traveling and would like to have exposure to locals. However, the company does not own its own properties. Nor does it provide users the ability to participate in long-term ownership of the accommodations units. This leaves them missing out on the opportunity to generate a great return for the long run. Where Airbnb is the service provider, a new firm, NuuRez, seeks to become the asset owner.

The way this works is multifaceted. Where Airbnb charges a fee for users to book third-party properties, NuuRez has a different goal. The company is seeking to raise enough capital to acquire attractive properties that it can then lease out. Units targeted by the firm include small garden apartments, multi-family homes, and motels that it can acquire and modernize. The firm is interested in areas where Airbnb and other similar service providers deem to be hotbeds of interest. It then lists these properties on Airbnb and on other platforms and waits for users to book. Another avenue explored by the firm involves allowing investors to have the company ‘manage’ their properties for them. This is only available for investors who invest in the company a sum of $5,000 or more. In exchange, NuuRez will place its investors’ properties on the relevant platforms. Once there, it will prioritize leasing those out when possible.

NuuRez does not just focus on short-term accommodations. The company encourages tenants who will stay for longer periods of time. During these stays, the company will allow its tenants to lease the properties out on Airbnb and similar platforms. In the example provided, the company looked at a rental property under contract with a daily-equivalent cost of $40. The tenant could then place the listing on Airbnb and in any given night perhaps bring in an income of $140. High occupancy rates using this method might even allow the tenants in question to profit off of the arrangement.

According to management, the company is already acquiring properties in ‘travel-friendly’ states. These include Florida, Texas, Mississippi, and Alabama. No details have been provided as to how many properties they currently own, but we do know that the company is still very early stage. In its filings, it provided financials for its first month of operations only: November of 2019. In that month, the firm generated nothing in the way of revenue but saw a net loss of $9,250. In order to grow, the firm also intends to raise up to $50 million through a Regulation A+ filing immediately following its current capital raise. What that will look like, though, is anybody’s guess. If the company can achieve some scale, management believes that it can be a different kind of firm compared to other startups. With a low-cost structure to the enterprise, management plans to pay dividends to its shareholders soon. The expectation is for this to occur by the end of the third quarter of its 2020 fiscal year. In all, management intends to allocate 60% of its profits toward distributions.

NuuRez has a steep hill to climb in order to achieve any sort of market presence. But if the company is successful on this front, it will be playing in a fairly large, growing market. According to one source, the global sharing industry is projected to expand up to $335 billion by 2025. This represents a significant amount of growth compared to the $15 billion the market stood at back in 2014. Such impressive expansion over a short period of time may seem unlikely. But when you look at consumer preferences, it seems like a realistic expectation. 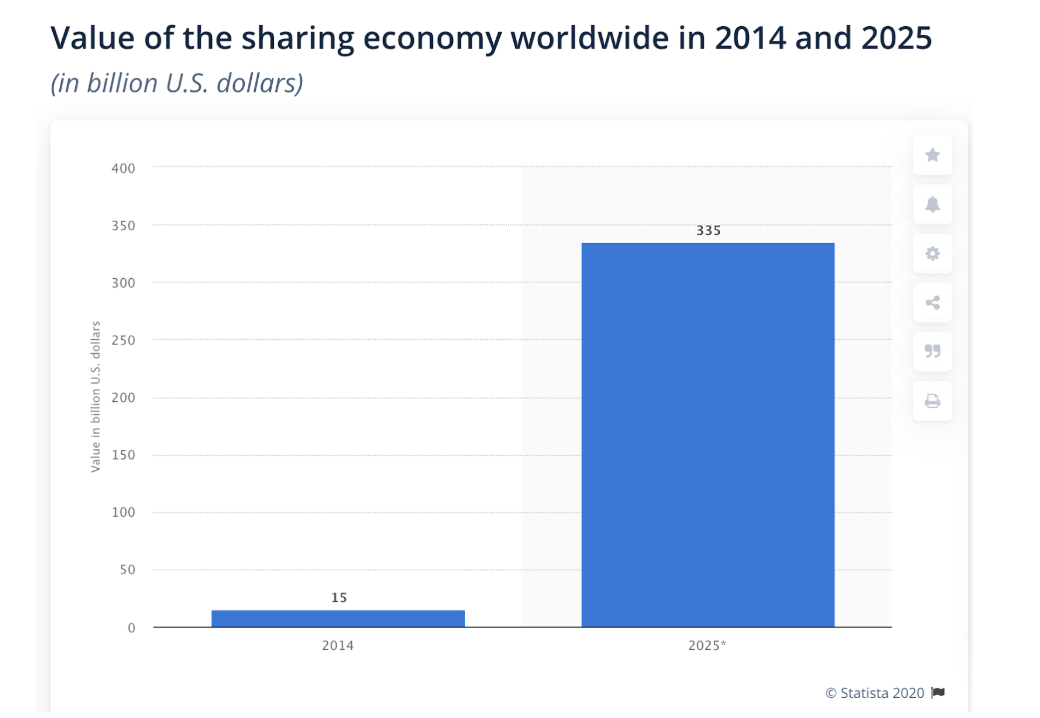 As an example, we need only consider some statistics, like those illustrated in the image below. Based on the data provided, a full 43% of individuals in North America are willing to share/rent property from others. An even larger 52% of people in North America are willing to share/rent out their own assets. While this number might seem high, it’s actually low compared to many other countries. When it comes to travel, we could end up seeing a big slice of the pie move in this unique accommodation direction. After all, by 2025, it’s estimated that a full 75% of the workforce will be made up of Millennials. They, as well as Generation Z, are the most open to the sharing paradigm shift. Another statistic claims that 7 in 10 Millennials want to stay at local host rentals while traveling. Not only are costs lower than traditional accommodations, but they also provide an open door to customs. 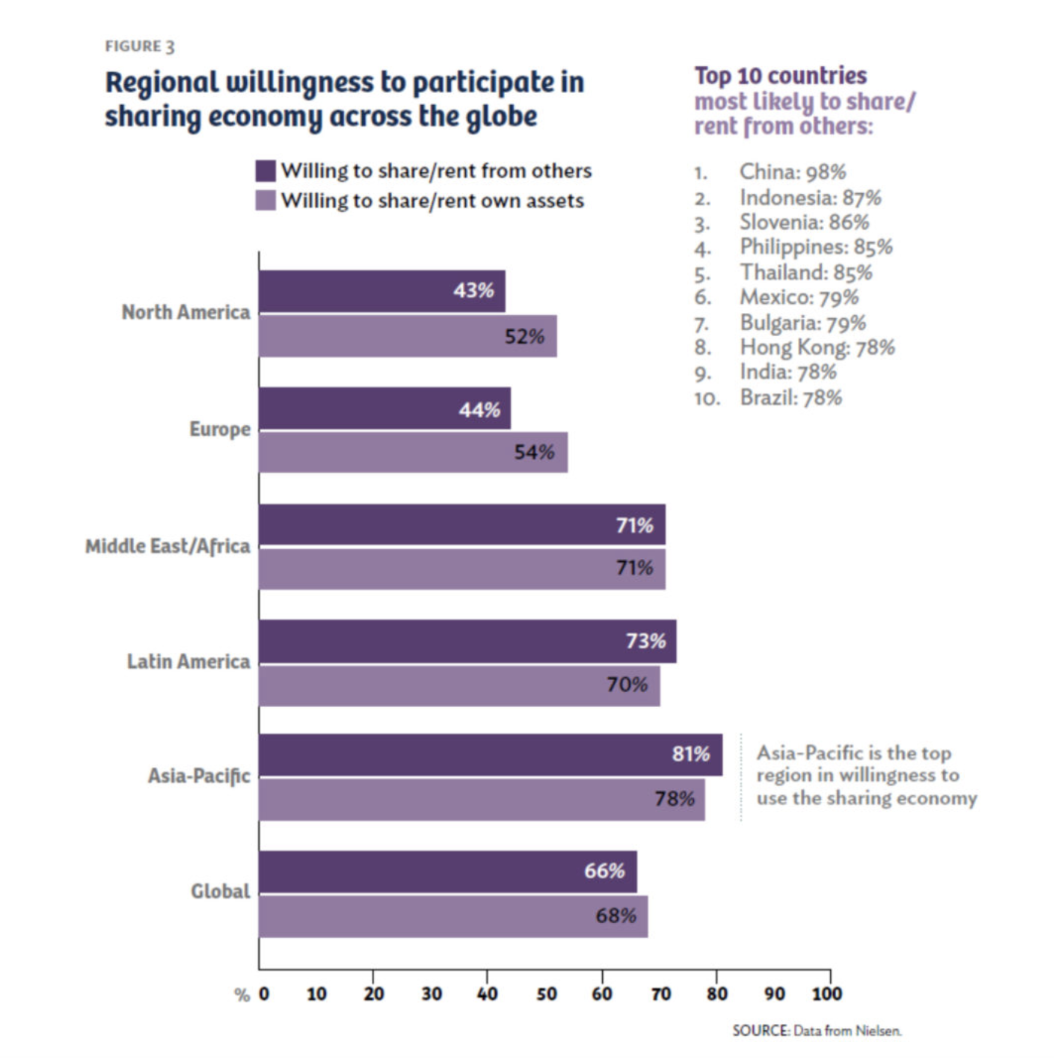 Understanding the full opportunity of this space is a challenge. After all, the sharing economy has to do with more than just accommodations. It includes transportation services like Uber and Lyft, as well as other goods and services. Drilling down, though, the data is encouraging. One source estimates that the global market for local host accommodations was $169 billion in size in 2018. It might be better, though, to focus more on the US since NuuRez is focusing here first.

According to one source, published in early 2017, the market for private accommodations in the US was forecasted to total $36.6 billion in 2018. Another source was a little more conservative. It suggested that the market for short-term accommodations in the US was $23 billion in 2018. Last year, the industry was forecasted to grow to $30 billion. If this is accurate, it would have taken the space from representing 8.6% of the total accommodations market in the US in 2018 to 11% in 2019. This growth rate, standing at about 30.4%, implies strong growth for the foreseeable future as well.

In its capital-raising transaction, the management team at NuuRez is taking a rather simple approach. The firm is issuing common shares in the company at a price of $1 per unit. In order to participate in the transaction, investors must commit at least $500 a piece. The total amount of capital sought after is $1.07 million, but the company can close the round with as little as $10,000. As of this writing, it has surpassed that threshold with aggregate commitments of $27,300. The transaction is being conducted at a pre-money valuation of $4 million. This is probably appropriate for a firm that is pre-revenue and still early-stage in its development process.

An Eye On Management

Some startups have large teams, others small ones. NuuRez, as it stands today, fits in the latter category. As of this writing, the company’s core member is Noelle Randall. Mrs. Randall has been involved in entrepreneurship for more than 20 years. She fashions herself as a successful real estate investor, renowned mentor, author, and speaker. She is an MBA with 2 master’s degrees, (Baylor & Penn State), and is also co-founder of FDR Horizon Enterprises, LLC, a private real estate equity investment firm. The company also serves as a managing entity of major retail brands. Though not an official member of the company, one person NuuRez has gotten to promote their cause is Kevin Harrington. He is most famous for being one of the original panel members of the hit show Shark Tank.

Taking the entirety of NuuRez and the prospects it offers into account, the company has been rated a “Deal to Watch”. On its size, the firm has an interesting, but not at all revolutionary, business model. It operates in an industry with significant growth potential, and the niche it’s in specifically is decent in size. The firm’s business structure should permit it to operate with limited costs as well. This may allow management to pay out distributions early on in the company’s life, but this doesn’t mean that it’s necessarily a good idea. Reinvesting in growth is more logical. The valuation proposed by management is also nowhere close to steep. In fact, it is probably around the level that you would anticipate for an early-stage business like this. This doesn’t mean, however, that there aren’t risks. In fact, there are a few investors need to be cognizant of.

For starters, the real estate market, both from the perspective of owning and from the perspective of renting, is challenging. Regional differences exist in this space and it may be difficult for management to cover these differences as they expand. This is particularly true of the legal side of things. Issues of liability for tenants who are essentially subletting are a concern. As are concerns over ‘managing’ the properties of other investors. None of these are insurmountable, but they are there. Another issue has to do with the company’s planned $50 million raise. This current raise, so early in its life and at such a low price, leaves us wondering what kind of terms the company will raise its $50 million at. After all, what leverage does an idea with little operating history have when it comes to seeking out that kind of capital? All of these issues are things that investors should ponder over, but on the whole, the firm does appear to offer attractive prospects.