SONDORS has been selected as a “Deal to Watch” by KingsCrowd. This distinction is reserved for deals selected into the top 10%-20% of our due diligence funnel. If you have questions regarding our deal diligence and selection methodology, please reach out to hello@kingscrowd.com.

In an era when society is focusing more of its efforts on being environmentally-friendly, consumers are open to ideas. One way to accomplish ambitious greenhouse gas emissions targets is to move away from fossil-fuel backed vehicles and toward electric ones. In recent years, as prices have come down and technology has improved, adoption among drivers has grown. Add to this the attractive car-sharing market and some interesting tie-ins become available. This could lead to appealing returns for the right companies and the right investors along the way.

Anthropogenic climate change is real. There is no longer any question about that. One way to combat the problem is to reduce greenhouse gas emissions. In the US alone, about 29% of all of these emissions came from vehicles. In addition, major cities across the world already have their streets full of vehicles. As populations grow in many areas, this trend will only worsen. One company looking to tackle both of these concerns is SONDORS, an early-stage startup dedicated to building a new type of low-cost electric vehicle. It’s not just building a car though. The company intends to create a network dedicating its fleet to car-sharing. The end goal here is to create value for the buyers of its vehicles while also addressing vehicle congestion across the planet’s busiest cities.

SONDORS and its management team have a vision. That vision is to revolutionize the electric vehicle space. To do this, the firm is currently raising capital aimed at allowing it to construct a prototype of its electric vehicle, known as the Model SONDORS. SONDORS is not designing a conventional car. The company, instead, envisions its creation as a three-wheel, front-wheel drive vehicle with two seats in the front and one in the back. The business claims its model will be capable of driving up to 300 miles on a single charge, and its battery can see a 55% charge from zero in under 19 minutes. The car is advertised as being fast too, going from 0 to 60 in only five seconds. Drivers can also use their smartphone or a tablet as a dashboard for the vehicle.

Presumably, the three-wheel make of the vehicle will allow the company to bypass many of the regulations typical of the car industry. This means it won’t be perceived (and probably won’t actually be) as safe as four-wheel cars. On the other hand, for those willing to accept this tradeoff, the vehicle will be cheaper. Management currently expects to sell the cars for around $19,500 a piece. This is nearly double the $10,000 the company initially advertised, but the change is not without cause. The company has decided to focus on building a unit with greater mileage per charge since it claimed that’s what customers stressed as a pain point.

If this were the only approach being done by SONDORS, investors would probably be advised to stay clear of the business. The car industry is notorious for being unprofitable. Tesla Motors, a leader in the electric vehicle category, is a good example. It wasn’t until 2018 that the business was finally able to start generating positive operating cash flows. On an earnings basis, the firm still struggles though. In 2018, it saw a net loss of $1.06 billion. The net loss last year was better but still significant at $775 million.

To differentiate itself from the competition, SONDORS has decided to tackle the car-sharing market as well. When individuals buy their vehicles, they have the option to connect them to what the company calls the SONDORS Network. When owners are not using their vehicles, they can make them eligible for car-sharing for other individuals on the network. The aim is to charge users $45 per day for the vehicle’s usage. Under this scheme, SONDORS would receive 30% of the revenue generated, while car owners would retain the remaining 70%. Owner proceeds have the option to allocate their proceeds toward their car payment. SONDORS also expects to be able to generate revenue from insurance on the cars, but specifics have not been provided.

In its first year of operating, SONDORS hopes to ship 3,580 electric vehicle units. Already the company has received pre-order payments on around 1,500 units. The business expects to be able to grow rather rapidly. It claims to have the capacity today to produce around 72,000 units every year. If so, at the retail price of $19,500 per unit, car sales alone could generate revenue for the company of $69.81 million per year.

While this idea is interesting and sounds solid, there are some important things to take into consideration. First and foremost is how the company is structured. Before focusing on electric cars, the founder of the company, Storm Sondors, created and sold electric bikes. The company’s objective was to sell a low-priced bike to compete with higher-priced models. These were initially priced at $799 apiece. In their first 18 months of selling, the company claims to have sold 35,000 units. This is fantastic. Financials for 2018 and 2019 could not be found, but for the bike company, 2017 sales were $4.64 million while net income was $405,958. The company’s operating cash flow for that year was negative to the tune of $128,762.

At first glance, this may make it seem like investors are buying into a company that is already successful and just hoping to launch a new product line. This couldn’t be further from the truth. Based on the firm’s filings, the SONDORS currently raising money is separate from and not included in this capital transaction. The SONDORS undergoing the capital raise actually generated no sales in both 2017 and 2018. It saw a net loss of $1.05 million in 2017, a loss of $344,335 in 2018, and negative operating cash flows of $1.02 million and $108,102, respectively, in those given years. This adds a significant new level of risk to the pie. 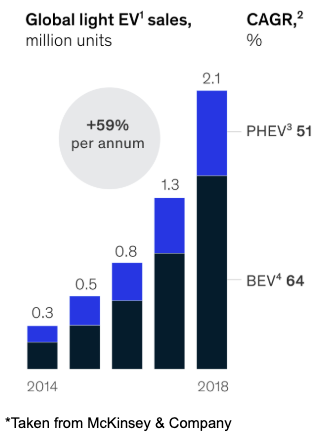 SONDORS fashions itself as an operator at the intersection of electric vehicles and car-sharing. That’s precisely where they belong. The first of these markets, electric vehicles, is large and growing rapidly. According to one source, the global market for electric vehicles grew at an annual rate of 59% between 2014 and 2018. This allowed the annual units sold rising from just 0.3 million units sold to 2.1 million during that period. Between 2017 and 2018, growth was 61.5%. Despite this strong sales growth, the electric car market accounts for a small sliver of the broader car space. Back in 2014, it accounted for 0.4% of the market, and in 2018 that grew to 2.2%. 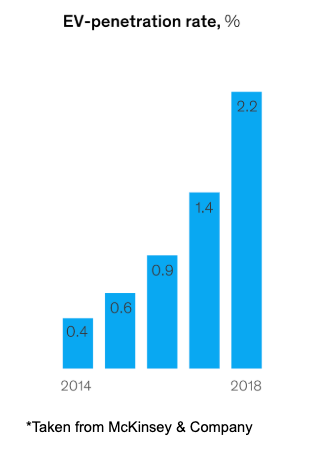 Over time, it is expected for this to change. According to the IEA (International Energy Agency), the EV30@30 campaign is calling for 30% of the vehicles sold globally by 2030 to be electric ones. This would translate to, if estimates are correct, 44 million cars per year. In all, it would also mean that of the global fleet of vehicles, 253 million would be electric by 2030. That is up significantly from the 21 million forecasted to be a part of the global fleet this year.

While the electric car market is large, it’s important to keep in mind the other market SONDORS is playing in- car-sharing. According to one source, this market is estimated to have been worth around $1.5 billion back in 2017, with 100,000 cars in the global fleet. Between 2018 and 2024, the space is expected to grow at a rate of 20% per year, ultimately reaching $12 billion in size. This will necessitate the addition of around 20,000 additional participants in the space.

SONDORS is undergoing a simple transaction to raise the money it is hoping to achieve. But the terms are rich. According to the data provided, the company is seeking to raise between $9,980.64 and just under $1.07 million. As of this writing, it has $390,593 committed to its raise. Common shares are priced at $28.68 apiece, but in order to participate in the transaction, participants must contribute at least $315.48 to the firm. This is all well and good, but the real catch is the company’s valuation. At this time, SONDORS is valuing its company at $80.38 million. If this included the electric bike business, it might be a sensibly-priced deal. However, this is not the case and investors are being asked to value the company at the aforementioned price despite no revenue. This is very pricey, to say the least.

After careful review of the company and its prospects, we have decided to rate SONDORS a “Deal to Watch”. On the good side, the company operates in a large, fast-growing, and attractive market. The electric vehicle space is appealing, as is the car-sharing market. The firm’s founder has extensive experience in the electric vehicle space through the sale of electric bikes. The firm is also letting investors know that this particular raise is for a prototype. It is not for scaling up for widespread manufacturing and distribution. While this means another raise will occur down the road, it also sets realistic expectations for those investing in it.

This isn’t to say that everything is great though. The biggest downside is that the company is a new one and has no relationship to the electric bike firm. In short, the founder of SONDORS is using his prior success to try to justify a very high price on a new firm that has no sales history. Another downside is that this space is highly-competitive and even the big players struggle to do well. The twist on car-sharing does make this more interesting, but even that could be easily replicated by the competition. For all of these reasons, investors should be cautious. But if the firm does manage to create the prototype it’s expecting to create, and if its performance matches management’s guidance, then this gamble could pay off.