Did you know 55% of the world’s population resides in urban areas?

That number is expected to increase to 68% by 2050. UN projections suggest “that urbanization, the gradual shift in residence of the human population from rural to urban areas, combined with the overall growth of the world’s population could add another 2.5 billion people to urban areas by 2050” (UN Department of Economic and Social Affairs). 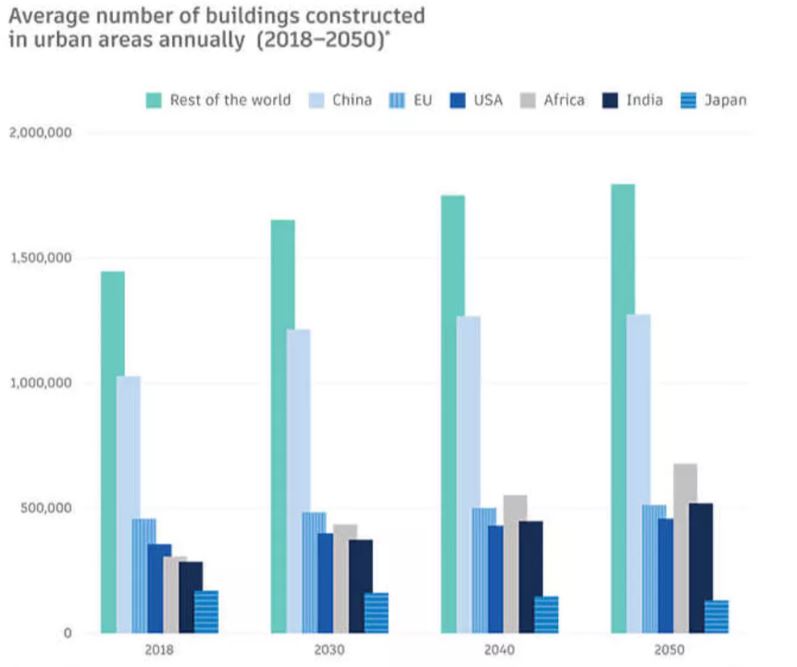 With more people living and working in urban areas there is a growing demand for more  living and work space as well as supporting roads, sewers, water resources, etc.

“Just keeping pace with projected global GDP growth will require an estimated $57 trillion in infrastructure investment between now and 2030. That’s nearly 60 percent more than the $36 trillion spent over the past 18 years,” according to a 2013 report by the McKinsey Global Institute.  Real estate design firms are poised to be one of the winners from this mass urbanization trend. 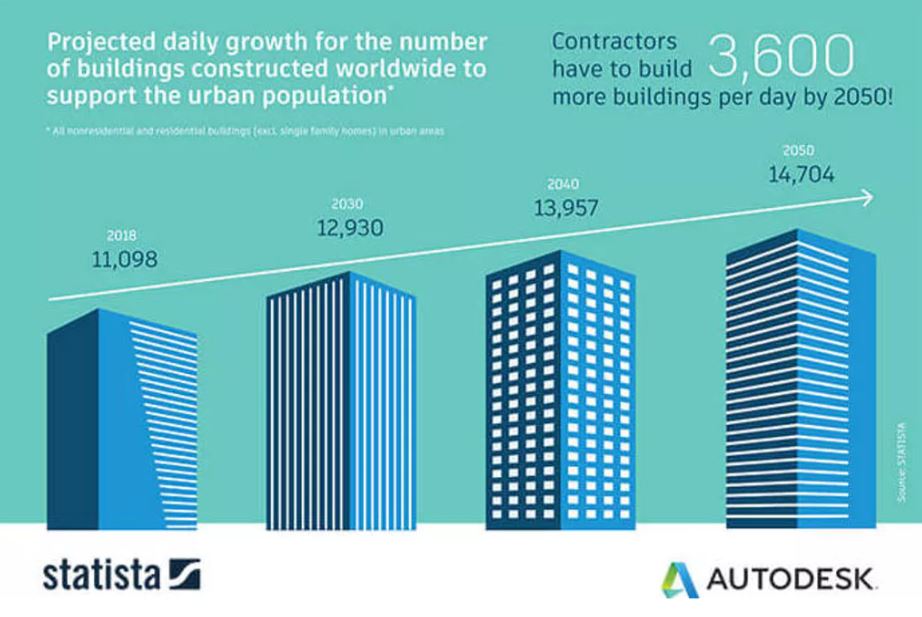 However, in order to service clients well, design and architecture firms need to be equipped with the right tools to do so efficiently. Currently, real estate projects require the use of several independent software tools, making large-scale projects, like many of those in urban areas, increasingly difficult.

With architecture software tools often unable to communicate and with most tools not providing the necessary end-to-end capability for managing projects, a new more comprehensive design tool solution is in high demand. Compounding the problems with current software solutions is the fact that most of these softwares don’t make use of digital twinning technology.

Named one of Gartner’s Top 10 Strategic Technology Trends for 2017, digital twin technology refers to virtual representations of things in the physical world.  And “while the concept of a digital twin has been around since 2002, it’s only thanks to the Internet of Things (IoT) that it has become cost-effective to implement.”

Sparked by NASA’s use of the technology for space exploration, Forbes predicts “we are on the cusp of a digital twin technology explosion.”  Specifically, digital twinning has massive potential in city planning and has been underutilized.

These virtual replicas can help answer questions including, but certainly not limited to-  “Would the perfect city have open spaces and plenty of natural light? Would travel between any two parts be simple and fast? Would development be structured and sympathetic to the rest of the city?”

With their newest product, Smart World Pro, Cityzenith aims to both consolidate urban planning software and to implement the powerful tool of digital twinning to service the urban planning design software market, a $2 billion industry with an annual growth rate of 7.2%. 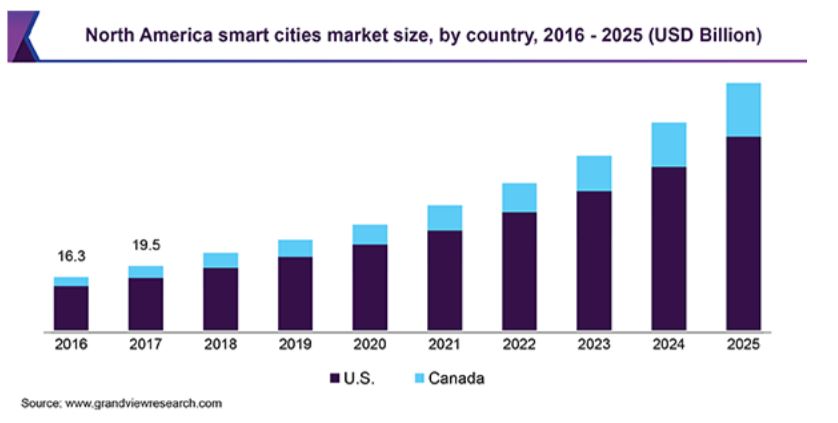 In doing so, Cityzenith intends to meet the needs of the Smart City, an urban area that incorporates the IoT in development.

Smart World Pro is a single platform the founders have dubbed “a vast 3D Digital Legoland for building professionals, where all of the information that you need to design, build, and run a project, at any scale, is right where you want it to be.”  The platform is also advertised as accessible to “architects, planners, governments, property managers, construction companies, systems integrators, and many more.”

In addition to incorporating new powerful twinning technology, Smart World Pro spans the lifetime of a project from design and construction, to operations and even tenancy.

In sum, Cityzenith’s solution “scenerioizes” city planning in advance to optimize outcomes and allow for seamless flexibility from an all-in-one dashboard.

Other features include universal data importing, over one billion data layers including real-time traffic data and energy consumption, voice-enabled data searching, and mapalyze, including line of sight and micro climate data, all key product differentiators. 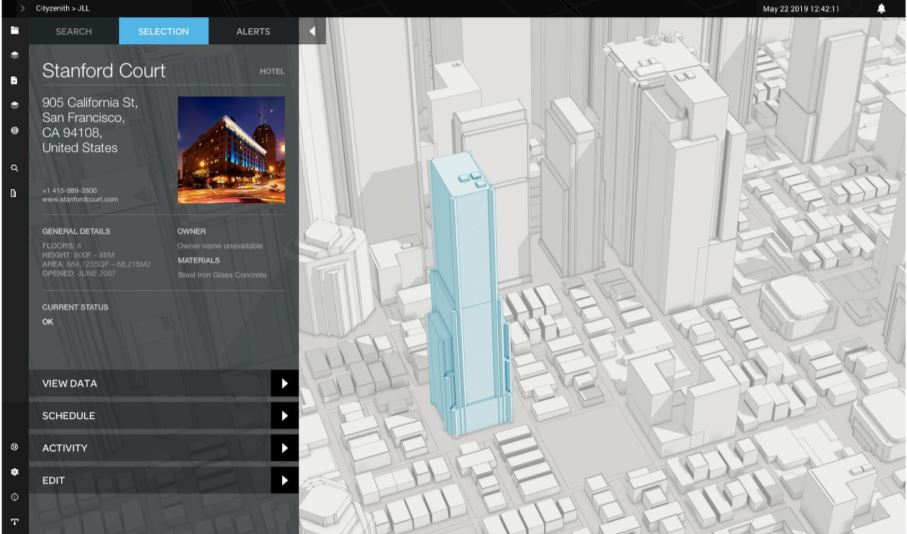 In general, these technologies are already being implemented worldwide and have received promising reviews from leaders in the field. In the Amsterdam Arena Innovation Centre, for example, Huib Pasman, tech strategist, explains: “We will use the digital twin to allow for optimal design and to test certain scenarios before we start building systems and to make sure we make the right decisions.”

As of July 2018, Cityzenith has signed contracts with ten major cities and also markets to real estate owners, infrastructure players, and architecture and engineering firms.  These contracts span the globe, an impressive portfolio for a company at this stage. Some early customers include Cushman & Wakefield, JLL, Lendlease, W.S. Atkins, and Prologis, some of the largest players in commercial real estate and construction.

This consolidated approach, along with its price point sets it apart from competitors.  Cityzenith does face huge incumbents, but these companies have a broader focus to the point that the markets scarcely overlap.

These differentiators will help Cityzenith to compete with the likes of CL3VER, CITIVis, SMARTERBETTERCITIES, Esri, Autodesk, Dassault, Urbanetic, and Willow.

For more context, Esri, a more established competitor, has much steeper pricing. In addition, it appears to be less centralized, offering several independent products. The complete SaaS mapping platform runs for $100-$3800 per year, depending on desired features.

Autodesk, is even more pricey and appears to have less of a focus on urban planning software, offering it as one of several SaaS products. Though a large incumbent, Autodesk has yet to incorporate digital twinning technologies into products.

Willow, an emerging competitor, offers two products, WillowTwin and WillowDigital which when combined are comparable to the Cityzenith product, but they are still in the early days as well.

CEO Michael Jansen has plenty of experience as both an architect and entrepreneur, making the Cityzenith team a strong point for investment opportunity.

Michael has worked around the globe as an architect, leading Asia practices for international firms based in the US. In 2004, he founded Satellier, Inc., a multinational building information modeling (BIM) services firm backed by Sequoia Capital, one of the most well-regarded Silicon Valley VC firms. He studied architecture at Yale and Cambridge and was a Fulbright Scholar.

Cityzenith is a Deal To Watch. There is plenty of evidence that timing is ideal and that the market is growing at a steady rate. Media raves about the power of digital twinning technology and warns that we are on the cusp of a digital twinning explosion. The timing for entering this market is optimal.

Specifically, the case for digital twin technology in real estate is quite strong. Mike Monteith, one of Canada’s leading experts in information technology, explains “By optimizing systems and connecting people, owners and operators can use digital twins to reduce costs, avoid future costs, increase occupancy rates, and improve overall asset value. In fact, we’ve calculated that they can lower operating costs in some buildings by up to 88 cents per square foot per year.”

The addition of digital twinning technologies to an already comprehensive solution sets Cityzenith apart from the competition. The value of the product lies in its universality.  Not only does it tailor to the needs of a wide range of architects, designers, and planners, but it spans the length of the entire project, from design to demolition.

Cityzenith is small and still very early stage, but it has established some traction and has a business model that can scale. For continued success, Cityzenith needs to significantly accelerate sales efforts, as well as accumulate proof points from early users.

Future challenges lie in the ability to get companies to make a change in the software they already know and rely on—a risky choice. Testimony from early users may encourage other potential clients to be more trusting of the technologies, helping to prove value over incumbents.

So far as exits look, positive acquisition may be possible in the near future.  Autodesk, one larger competitor, acquired construction software platforms BuildingConnected and PlanGrid for $275 million and $875 million, respectively.

At this stage of the company lifecycle, it appears to be an intriguing investment opportunity.

Nevertheless with a completed product and early traction, the team has identified a pain point and offered a solution. Now they need to prove their solution will win in the market at scale.