Amplified Ale Works has been selected as a “Deal to Watch” by KingsCrowd. This distinction is reserved for deals selected into the top 10%-20% of our due diligence funnel. If you have questions regarding our deal diligence and selection methodology, please reach out to hello@kingscrowd.com.

The craft brew market still represents a small sliver of the larger beer market in the US. Even so, it’s growing at a nice pace while other beer sales are suffering. This has created an interesting shift in the beer industry in the US, as well as abroad. The end result is that nice prospects exist for the firms that can capitalize on this trend. One such firm that has gotten in on this transformation is Amplified Ale Works. Unlike other players in the space, though, Amplified is mixing music with its business model. This allows the business to create fun, unique events that cater to a wide range of individuals.

The broader beer market in the US is not doing particularly well these days. In 2018, total beer sales, by volume, declined by 0.8%. The craft brew subsegment in this space, though, is another story entirely. Despite the decline of beer sales nationwide, craft brew sales are rising. But in a market flooded with thousands of competitors, some firms are having difficulty differentiating themselves. One company that appears to have found a solution to this competitive pressure is Amplified Ale Works.

Amplified Ale Works should be thought of as two different types of companies. The first, and most obvious, is as a brewpub that brews craft beers and sells them to their customers. The second is as a live entertainment/event venue that is tasked with providing live music to its visitors. The company achieves this dual role through its two physical locations: one in Pacific Beach and another in East Village San Diego. At these locations, the company has weekly events and shows. These shows are sometimes done by local musicians, while other times they are provided by touring groups. This serves to draw customers to its property where it then sells to them craft brews of their choice.

According to management, the company has seen impressive results with certain drinks. Its more ‘progressive’ offerings, like hazy IPAs, fruited sours, and barrel-aged stouts have proven particularly successful. Drinks like these include its Hazy Peach IPA, Black Currant Manga Sour, Coconut Vanilla IPA, and its Canned Hazy IPA. Management also pointed out its lagers as offering attractive prospects moving forward.

Prior to 2018, Amplified would have best been described as a nano-brewery and little more. It was only in August of that year that the firm managed to open its doors for live events. Since then, though, the company has done some interesting things. Primarily, it has collaborated with musicians/bands. It does this by creating original artwork on its packaging aimed at celebrating and advertising new albums or music tours. Specifics were not provided, but management said that these types of beverages have been among their most successful. They also claim to have a pipeline of groups to cater to on this front.

In terms of size, Amplified is still a very small firm in a very big pond. Today, it produces 2,000 barrels of alcohol per year. Unfortunately, this is the limit for its current facilities, so it is hoping to expand. Specifically, management has identified what it calls the Lemon Grove facility. This is a 16,000 square foot site on which sits a 5,000 square foot building. After acquiring the facility, it intends to turn it into a 15-barrel brewhouse. Between that and the addition of fermentation capacity, Amplified will see its annual production rise to 10,000 barrels per year.

This would be enough, management feels, to supply between three and five more future beer garden locations. That said, the firm doesn’t want to use this facility just for the production of alcohol. They intend to use 1,500 square feet of space (including part of the parking lot) as an outdoor beer garden. Amplified also plans to have a 150-person capacity testing room at the facility, plus it intends to invest in a food truck. None of this will come cheap though. The company is planning to buy the facility for more than $1.1 million, but the total investment needed to achieve its growth plan is nearly $2.9 million. Of this, the firm hopes to get at least $1.07 million from its current capital raise, with the rest coming from an SBA loan.

Though this is a lot of money, management has done well in recent years to earn the right to raise that capital. In 2018, revenue for the business came in at $2.90 million. This was 20.6% higher than the $2.41 million the business generated in 2017. No formal figure has been provided for 2019, but estimates provided by management ranged between $3.6 million and $3.7 million for the year. This would translate to a year-over-year expansion of between 23.9% and 27.4%. It is likely that much of this growth came as a result of the company’s community-friendly live music and entertainment initiatives.

By all accounts, Amplified is operating in an attractive subsegment of a larger market. That said, though, there is some ambiguity over precisely where the company fits. Technically its size today, at 2,000 barrels per year, puts it somewhere between being a nano-brewery and being a microbrewery. There are no defined limits for a nano-brewery, but microbreweries are larger. Their production is typically capped at around 15,000 barrels per year. Anything larger than that would place it as a regional player. Another appropriate descriptor for Amplified though would be a brewpub. Brewpubs can be really any size, but they, by definition, sell more than 25% of their product directly to consumers. I would make the case that Amplified is a small microbrewery brewpub.

At the end of the day, this disparity is not all that important. But understanding where the company fits helps us to understand what the current market looks like. For instance, in the craft brew space, a full 69.9% of barrels produced are made by regional players. Microbrewers account for a significantly smaller 22.5% of this niche, while brewpubs account for just 6.3% of the market. The number of players and the growth experienced among them is also materially different. In 2008, for instance, there were only 450 microbreweries throughout the US. By the end of 2018, this had grown to 4,522 players. The brewpubs market has also grown, but nowhere near the rate that the microbrew space has. Over the same 10-year period, the number of brewpubs expanded from 1,009 locations to 2,594. Though the growth rate of physical brewpubs might be slower than microbreweries, their staying power is strong. In 2018, there were only 90 business closings. This compared favorably to 322 openings in the same year.

Estimates of what the future holds do vary to some degree. One source estimates that the global craft brew market was about $108.91 billion in size as of the end of 2018. That same source suggests that the market should grow at a rate of about 8% per annum through 2025. In that year, the industry should be about $186.59 billion in size. Another source suggests slightly slower growth of 7% per annum. Given the 7% growth rate seen in the US market in 2018, this appears to be a realistic expectation. 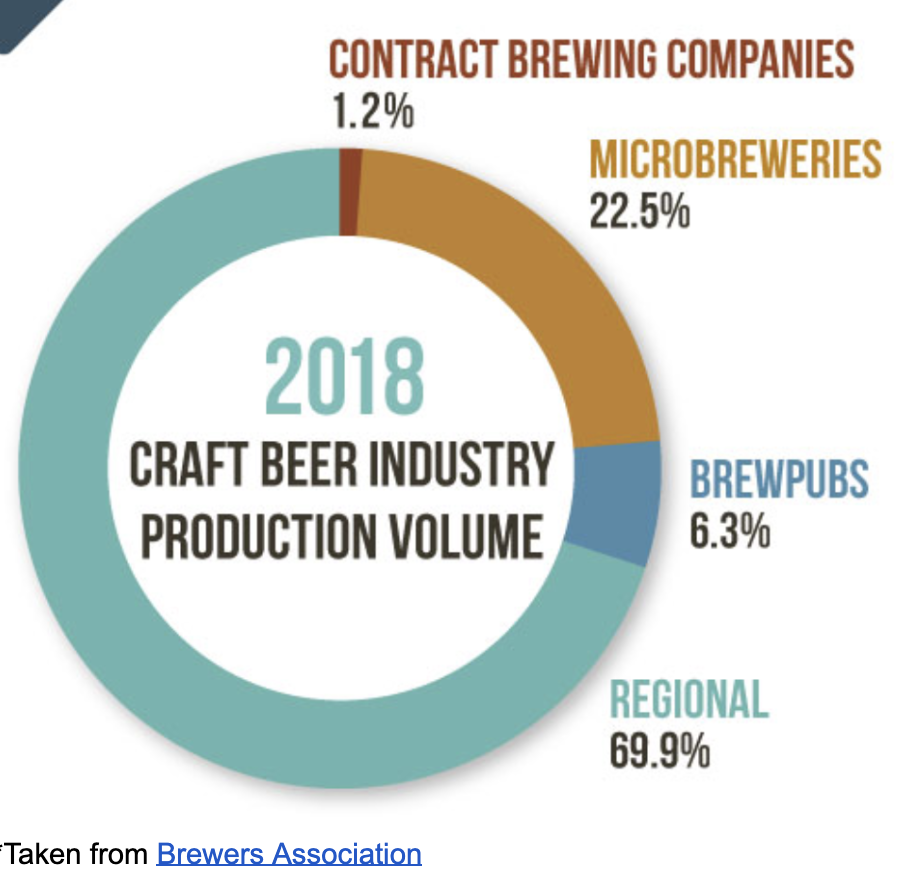 At the core of the Amplified vision are two individuals. The first of these, Alex Pierson, is the company’s Managing Member. Prior to his time at Amplified, he served in the same role at California Kebab, Amplified’s predecessor company. Before emphasizing craft brewing, the business operated as a Mediterranean fast-casual concept. Before starting these firms, Alex worked as a Senior Broker at HREC Investment Advisors. Prior to that, he was an Associate at Neptune Hospitality Advisors. The second person of interest is Michael Craig, Amplified’s COO. Before joining Amplified in 2017, Michael served as a Manager at Ballast Point Brewing & Spirits for more than three years. Prior to that, from 2008 through 2014, he was employed as a General Manager at Hoffer’s Cigar Bar and Ale House.

The capital transaction being enacted by management is relatively simple. Amplified is looking to raise between $300,000 and $1.07 million by issuing preferred units in its business. These are being priced at only $1.105 per share, but in order to participate in the deal, each participant must contribute at least $500. As of this writing, Amplified only has $168,202 committed to its deal, so there is still concern over whether or not it will receive the cash it’s aiming for. The preferred units being raised place a pre-money valuation on the company of $11.05 million.

Amplified Ale Works is an interesting player with a refreshing twist on the craft brew category. Instead of focusing solely on the beverages, the company mixes that concept with the almost universal love for music that people have. Their idea to promote bands using their beverages is an excellent move, as is the fact that the company’s growth in recent years has been impressive. In all likelihood, if the business can expand as planned, growth prospects over the next few years should be rewarding for current and prospective shareholders. All of this is great, but there are some issues to contend with.

The biggest issue here seems to be profitability and cash flows. While 2017’s results were attractive, 2018’s bottom line was painful. Another issue to contend with is competition. At the moment, the market the company operates in is attractive. But with the broader beer market posting poor results, one has to wonder how long until craft brew’s ascent slows down. Even with these concerns, though, the positive does seem to outweigh the negative. This leads us to rate Amplified Ale Works a “Deal To Watch”.