Genius Juice has been selected as a “Deal to Watch” by KingsCrowd. This distinction is reserved for deals selected into the top 10%-20% of our due diligence funnel. If you have questions regarding our deal diligence and selection methodology, please reach out to hello@kingscrowd.com.

Health-consciousness is all the craze these days, and for a good reason. According to the US Centers for Disease Control and Prevention, the average life expectancy in the US fell for at least three consecutive years through 2018. This marks the longest sustained downturn in expectancy in a century. In response, consumers, particularly the youngest consumers in the US, have begun to actively shop around for foods and beverages that can keep them in top shape. One company seeking to benefit from this shift in societal thought is Genius Juice. A manufacturer and distributor of coconut-based smoothies, management seeks to do well by doing good.

Young people are more health concious than ever. One source surveyed different groups based on age and its conclusions were telling. A full 51% of those designated as Millennials are ‘always’ looking for healthy food options when considering what to consume. Generation Z isn’t far behind at 45%, matching the 45% of Generation X participants in the survey. This compares to 42% of those who fall under the study’s definition of Generation Y. It’s also far larger than the paltry 38% that falls under the Baby Boomer category. 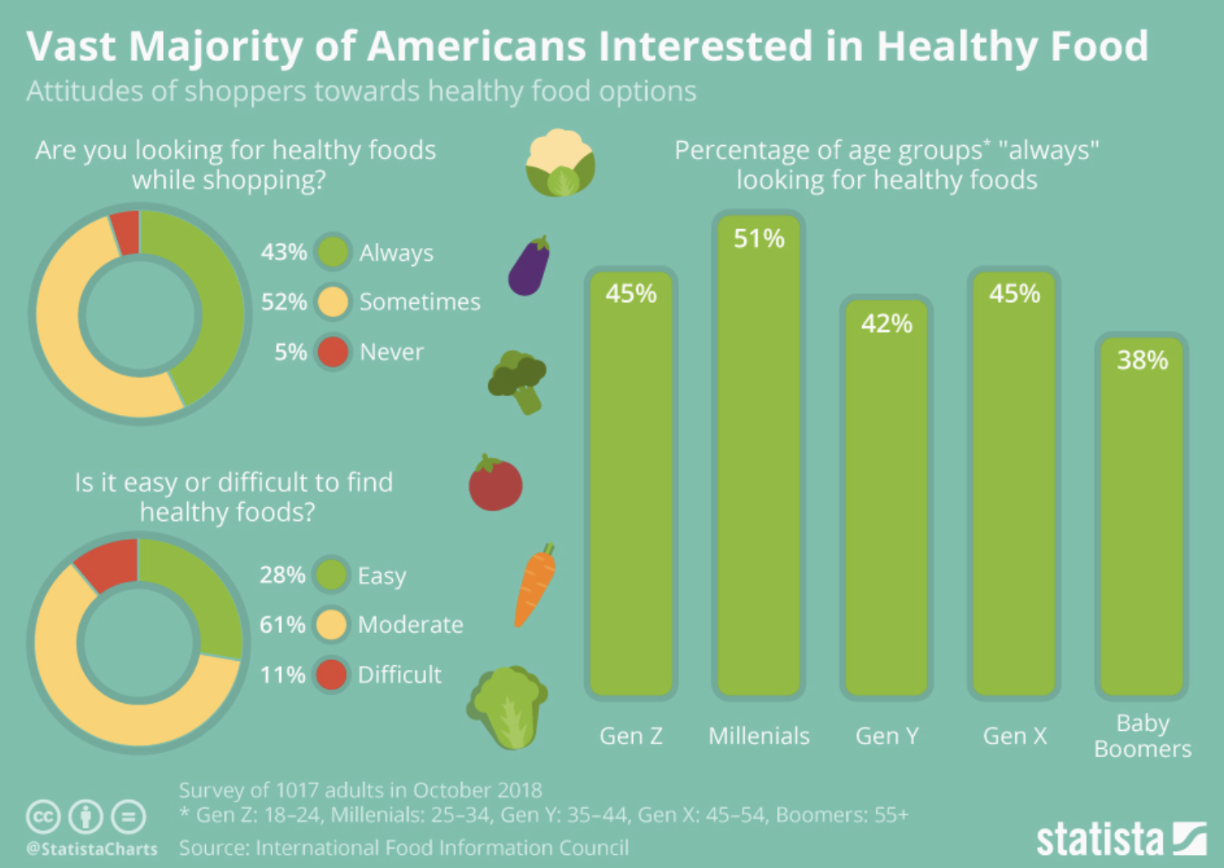 The founders of Genius Juice have seen and understand these changing market forces. This led to the creation of their firm, which produces a whole coconut smoothie that it sells for $4.99 per bottle. The smoothie brand uses not only coconut water but also what it calls the coconut’s meat. In addition to selling its Original incarnation of the brand, it launched two additional flavors, Mocha and Tumeric, in 2019.

By all accounts, Genius Juice’s smoothies should be considered a superfood. The product provides consumers with protein, fiber, potassium, electrolytes, good fats, and MCTs. It’s both vegan and paleo diet compliant. In 2019 (in a show that aired in January of this year), the company was featured on the CNBC hit show Shark Tank. There, it won $250,000 investments from both Mark Cuban and Barbara Corcoran with a post-money valuation of $2 million. Management ultimately backed away from the deal, but it did receive orders worth $120,000 in the 24 hours after it aired.

Since inception, the company has done well to grow its brand. It currently sells its product direct-to-consumer online. In addition, it sells through Whole Foods Market in four of the company’s regions. Other clients include Albertson’s, Natural Grocers, Publix, and more. In all, its brand is distributed through more than 1,300 stores nationwide. With its capital raise, management intends to grow production while lowering its sales price to $3.99 per bottle. If all goes according to plan, it will secure nationwide launches this year in both Whole Foods Market and Sprouts. In all, it expects that 670 stores will be added to its network by the end of its second-quarter this year. The end goal is to grow revenue to $900,000 this year and to $6.2 million in 2021.

As of the end of its 2018 fiscal year, Genius Juice had cash on hand in the amount of $134,186. However, this seems to have been inadequate to maintain the company’s current course. Last year, it took on a $50,000 promissory note that will be due in 2021, plus it issued a note payable to a related party in the amount of $63,948. The company also managed to win a letter of credit facility with its manufacturer in the amount of $200,000. This one is particularly painful because it carries with it a 12% annual interest rate. All of these debts are on top of $913,266 in long-term debt (including $200,000 in the form of a convertible note) and $178,908 in the form of accounts payable that it owed at the end of 2018.

The precise industry that Genius Juice plays in is difficult to pinpoint. Technically, it sits in a niche in both the broader plant-based beverage market and the smoothies market. According to one source, the global plant-based beverage market totaled $11.16 billion in size in 2018. That same source estimates that the space will grow at an annualized rate of 12% through at least 2023. By that year, the market’s size will be an impressive $19.67 billion. This particular market includes beverages produced with almonds, soy, coconuts, and rice. It includes milk variants as well as other variants too. The smoothies market is not much smaller. In 2018, the estimated market size for smoothies was $12.02 billion. This space is expected to grow at a rate of about 7% per annum until reaching $16.86 billion in 2023.

In addition to these broader markets, there is information regarding specific market segments. One example is the global coconut water market. In 2018, this space was estimated to be worth nearly $4.21 billion. Analysts expect this market to grow at a rate of 12.5% per annum, on average, through 2028. If this comes to pass, the market should reach a size of $13.65 billion by the end of our forecast period. Another even smaller segment is the global coconut milk market. One source puts this at $880 million last year. Growth is expected to average about 7% per annum through 2029. This would place the industry, eventually, at $1.73 billion.

No matter how you stack it, the space for investors, while small, is attractive. The strong growth rate of between 7% and 12.5% per annum should be anticipated for the industry the company operates in. This will be fueled by today’s younger generations. Having more income to allocate toward their healthier lifestyle preferences will be a boon for management. This will take time and money, but a successful expansion in the US could serve as the foundation for that.

The terms of the deal being transacted here are relatively straightforward. According to the company’s filings, it’s trying to raise between $50,000 and $1.07 million through its crowd raise as part of a larger $2.5 million raise. The minimum investment per participant is set at only $100. This leaves the door open for most investors to participate. In exchange for their capital, the company is issuing convertible notes. These will convert at the next raise, subject to a 20% discount on the firm’s valuation, and subject to a $6 million valuation cap. Unlike a SAFE, the convertible note will carry an interest rate. This is set at 6%, which is at the low end of the range, but any interest accrual is a benefit to investors. As of this writing, investors have pledged a full $206,659 in cash to this deal.

At the helm of Genius Juice sits founder and CEO, Alex Bayer. Prior to starting the company in 2014, he worked as a Director of Marketing at VirginRaw Foods, LLC. Before that, he was employed as an Account Executive for the Imaging Division at Total Corporate Solutions. He also organized a charity called Karaoke for a Cure, which used the funds for a children’s hospital to treat leukemia and rare blood disorders. The second-in-command at Genius Juice appears to be Gavin Linde. He serves as the company’s National Sales Director. Prior to his time at Genius Juice, he was VP of Sales at Ax Water. He has also served as a Director of Strategic Sales at DRVN Partners and prior to that was the VP of Sales and Strategic Growth at Ricante Hot Sauce USA.

After a careful review, our team has rated Genius Juice a “Deal to Watch”. The company has done well to exhibit fantastic growth in recent years. Its narrowing net losses are encouraging, even as operating cash flows are disappointing (but expected). Though the CEO’s experience is lacking some, his team appears solid. The firm also operates in a small industry, but the growth rate seen here is incredibly encouraging. As consumers become more health-conscious, the company’s products should garner more appeal. This could have a multiplier effect as management adds on new flavors/mixes to its roster.

This is not to say that everything is excellent though. Though sales are projected to expand meaningfully, projections are no guarantee. There’s also the fact that the company is hemorrhaging cash (unless 2019’s unreported results show a change). High debt is also a concern, as is the interest rate of 12% on its line of credit. In normal cases, such high debt relative to sales would be a major turnoff, but interest rates are mostly low and sales expansion is encouraging. Add to this the company’s footprint in physical retailers. Also, add in its plan to add more locations this year and next, and any level of success should be positive. The company will need to pay attention to competitors because the food and beverage space is known for being hard to play in. That said, its earlier success is a positive sign of good things likely to come. In all, the rewards appear to outweigh the risks on this name at this time, and investors would be wise to consider taking a stake in the enterprise.