LEAH Labs has been selected as a “Deal To Watch” by KingsCrowd. This distinction is reserved for deals selected into the ​top 10-20% of our deal diligence funnel​. If you have questions regarding our deal diligence and selection methodology, please reach out to ​hello@kingscrowd.com​.

50% of dogs over the age of 10 will get cancer in their lifetime. It is widely agreed, the number of actual dogs with cancer is much higher, because while human cancer rates have been well tracked since the 1940’s, today there still is imperfect information on canine cancer. Additionally, the cost to diagnose cancer starts at $200, so many pet owners, on advice from their veterinarians, decide not to officially diagnose their dog. The veterinarian might advise against a formal diagnosis because current canine cancer treatment typically extends a dog’s life at most another year; it is expensive, painful for the dog and time consuming to go into the office for treatment. Below are the average costs as reported by The National Canine Cancer Foundation:

Some breeds, such as golden retrievers, are way more susceptible to cancer. 60% of all golden retrievers will die from cancer. According to the American Kennel Club, Golden Retrievers are consistently the third most popular breed in the US, behind Labrador Retrievers and German Shepherds.

38% or 48 million US Households have at least one dog, averaging 1.6 dogs per household. According to the US Pet Products Associations Annual Survey a whopping 90% of households with pets consider their pets as part of their “family.” A lot of Americans are faced with the news their furry family member is sick and there are no good treatment options to pursue.

A cure for canine cancer which works. 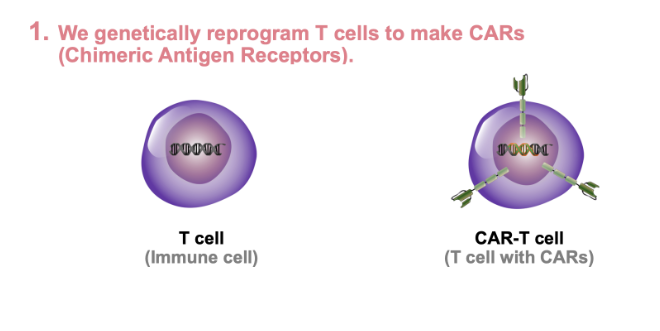 The first two CAR-T therapies received FDA approval in 2017. Currently there are over 350 CAR-T human studies being conducted worldwide. CAR-T is a major cancer breakthrough in humans.

LEAH Labs is confident CAR-T therapy will also work in dogs. The team has already been able to kill canine cancer in a test tube.

According to CEO, Wesley Wierson, the only competition for LEAH Labs is the current standard of care for treatment of canine B cell lymphoma. If LEAH Labs successfully got their CAR-T therapy through USDA approval and on the market, this might be true. There are at least three University research teams currently in canine clinical trial. Additionally, a recent Wall Street Journal article on canine gene therapy research identifies several other companies focused on gene therapy.

The most direct competitor is Dr. Nicola Mason, professor at the University of Pennsylvania, who is creating a CAR-T model for treating cancer in canines.

Dr. Stephen Ekker – Co-Founder, is Dean of Mayo Clinic Graduate School of Biomedical Sciences. Dr. Ekker has authored multiple patents and authored over 150 articles, according to PubMed. Dr. Ekker is also the Director, Office of Entrepreneurship at Mayo Clinic. Dr. Ekker has been editing genomes for twenty years. Additionally, Dr. Ekker has started and remains involved in other foundations and startups.

Dr. Jon Mochel – Co-Founder, is an Associate Professor of Pharmacology at Iowa State University. Dr. Mochel has started other startups and is involved with several veterinary and genome organizations. Dr. Mochel has recently worked at Roche and Novartis. He brings seasoned veterinary knowledge to the team.

Dr. Saad Kenderian – Co-Founder, is a board-certified Oncologist and Hematologist. After completing his medical training in Bagdad, Dr. Kenderian completed his residency at Michigan State before beginning his prestigious fellowship at the Mayo Clinic. Part of Dr. Kenderian’s Mayo training included fellowship training at the University of Pennsylvania under Dr. Carl H. June, who is credited for his pioneering work in the development of T-cell therapy for cancer. Dr. Kenderian is an author on a CAR-T cell patent currently being licensed by Novartis.

LEAH Labs is on track for success. The three scientific co-founders have significantly contributed to their respective fields. CAR-T works in humans and all research strongly indicates it will work in dogs. The co-founders appear to have understood their limitations, found a strong, young CEO in Wierson, and created a path to teach Wierson how to start a company.

Wierson has already graduated from two prestigious start up boot camps. His graduation from YC gave him the tools and access to the network to allow the scientists to do their thing, while he makes sure they have the appropriate resources.

LEAH Labs has a skeletal marketing strategy, which is fine. These are scientists, not marketers. Analogous to the human medical industry, once LEAH Labs has USDA approval, it would make sense to license their technology to a company with core competencies in marketing and distribution.

Wierson’s exit strategy is an IPO. He envisions other gene editing products from LEAH Labs. Wierson sited a comparable exit in the pet therapeutics space, Aratana, which just sold to Elanco fir $250M. Not bad.

Considering science has proven CAR-T therapy works in humans, this accomplished team of scientists will likely be able to prove CAR-T therapy works in dogs. CAR-T therapy for dogs will provide pet owners the option to cure their dog’s cancer. A cure for canine cancer likely will significantly alter veterinary recommendations about pursuing diagnosis and treatment. Considering the average pet owner spends close to $1,000 a year on their pets, the market to save their furry family member’s life should be huge.