The Keyno team has been selected as a “Deal to Watch” by KingsCrowd. This distinction is reserved for deals selected into the top 10%-20% of our due diligence funnel. If you have questions regarding our deal diligence and selection methodology, please reach out to hello@kingscrowd.com.

As the world population and economy grows, so too will the number and volume of non-cash financial transactions. This is why the payments processing industry is so hot, and at the center of it all are the major credit card companies. Payments processing is a huge space. But as with any large, complicated industry, it has a problem: fraud. Although financial transactions are becoming safer by the year, the rapid increase in their activity is resulting in ever-greater dollar amounts being lost to hostile parties. The end result is trillions of dollars worth of credit card, debit card, and prepaid card transactions occurring every year and, in parallel, tens of billions of dollars worth of fraud.

Keyno was set up with one aim in mind: to tackle the issue of fraud in the payment card industry. Though this may seem to be a complicated task, the firm’s proposed solution is fairly simple. Users merely download the business’s app, register their card, and start using it. When they go to pay with their card, they pull up the app and look at what’s called the CVVKey. This is a three-digit number that users give to the vendor they are making payment to instead of the CVV number on the back of their card.

What makes this system secure, according to management, is that the CVV2 number in the app changes multiple times per day, making it truly challenging for hackers or other data thieves to steal valuable data. Today, Keyno’s CVVKey technology is compatible with Visa. Not only can this be used with new Visa cards, it can be used with ones that have already been issued. The firm is also making available white label options and even an SDK plug-in for banking apps.

One interesting question is what happens with recurring purchases. According to management, users can engage in recurring purchases using the CVV2 utilized at the time of the initial purchase. They also claim their technology is compatible with Apple Pay, Google Wallet, and other mobile pay options. On the security side, the business meet’s the EU’s PSD2 requirements for strong customer authentication. The firm was also registered (through at least April of this year) as a Level-1 RSI Security PCS Program provider.

As of this writing, Keyno is compatible with Visa and major mobile wallets. In either Spring or Summer of this year, the business intends to launch pilot programs with banks across the globe. Its relationship with Visa already makes it a business that can be considered global. However this expansion will further validate the company’s technology and expand its footprint. Specific details have not been provided as to fee structure. However, management has said that the revenue will come from charging the banks who employ it a monthly service fee. For cardholders, it will be completely free.

Management has been working on this concept for several years. Even so, financial statements are only available for 2019. The business generated nothing in the way of revenue last year. It also saw no net income or net loss, and its operating cash flows were $0. How can this be for an operational business that has been working on its technology? Well, the answer comes down to tricky accounting. The company actually capitalized costs in the amount of $123,540 in 2019. Over time, it will amortize these as they are paid out.

There are few markets in the world that match or exceed the size of the space in which Keyno plays. In 2019, the total volume of payment card transactions across the globe totaled $43.9 trillion, up from 8.2% the previous year. These transactions stemmed from the nearly 16 billion payment cards that are currently on the market. Full-year 2019 figures are not out, but for the first half of the year we saw 202.4 billion purchase transactions. This amount was up 17.7% compared to the first half of 2018. If forecasts are accurate, the space will grow even larger over time. This year, it’s expected for total volumes to hit $47.4 trillion. By 2027, this figure is expected to reach $71.6 trillion. 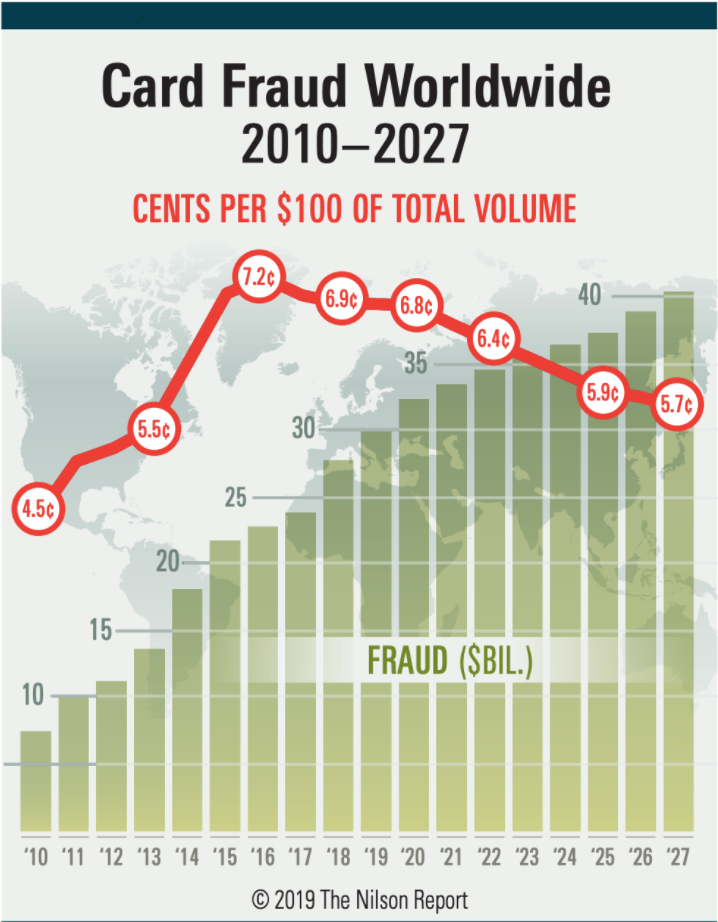 While total transaction volume is important, fraud figures are more important. Surprisingly, fraud accounts for an incredibly small portion of this space, but even very small amounts can add up to large sums. It’s estimated that in 2019 total fraud was $30.1 billion, which was up 8% from the $27.9 billion seen a year earlier. This year, fraud should grow further to $32.4 billion, up 7.7% year-over-year, and by 2027 it should hit $40.6 trillion.

An interesting lens for looking at fraud is how much of every $100 of transactions it accounts for. Back in 2011, only 5.07 cents of every $100 was related to fraudulent transactions. This amount surged over the years, eventually peaking at 7.15 cents for every $100 by 2016. Improved technology, however, has been working to bring this down. Last year it’s estimated that this figure will drop to 6.83 cents compared to 6.85 cents in 2019. By 2027, we should see the figure decline to 5.68 cents. To put this in perspective, the drop from 2016 to 2027 that’s forecasted will translate to $10.5 billion in savings on an annual basis.

Fraud is not evenly spread. In 2018, fraud affecting the US came out to $9.47 billion. Put another way, this accounted for 34% of gross card fraud losses globally despite the US making up only 21.5% of total transaction volume. Tied to this is the amount of fraud relative to activity of the major credit card companies. The global brands accounted for 83.1% of all volume but made up 89.3% of all fraud losses. Meanwhile, only 15% of all purchase volume came from CNP (card-not-present) transactions, but these accounted for 54% of all losses. This data shows that large players, most of which are American companies, incur losses more than anybody else. And they do so in situations where the original cardholder may still have the card on hand. Keyno’s technology seems like an ideal solution to battling this last point. Additionally, given the concentration of the major players, it can be easy for the business to expand.

Already, Keyno claims to be working with Visa. This is particularly positive when you consider results for the first half of 2019. During that period, $16.9 trillion worth of transactions had taken place, and Visa was the second-largest player globally behind UnionPay, with a total transaction volume of $5.7 trillion. That volume represents a 33.7% market share. Though the figure was not provided, it’s safe to assume that Visa’s share of fraud losses is probably comparable to its size.

In order to grow the business, management is looking to raise some capital. In particular, it is hoping to raise $500,000, but it has set the minimum as low as $50,000. The firm is doing this by issuing a SAFE to its investors. This SAFE will convert at the next round of funding or upon another triggering event, subject to a 20% discount to the company’s future valuation. For the first $100,000 committed, it will have a valuation cap of $5.5 million. This cap will increase to $6 million after that threshold is met. In order to participate in the raise, investors must commit a minimum of $100 apiece. As of this writing, the company’s total commitments amount to $54,733.

At the core of the Keyno team are its founding members: Robert Steinman and Lester Diaz. Steinman currently serves as the business’s CEO. In the past, he has served as a Managing Partner for Capitol Development. He was also a CEO at Capitol Supply and before that he served as a President and COO at Tender Armor. His co-founder, Diaz, is currently Keyno’s CTO. Diaz has experience as a Solutions Architect Consultant at LVOTEC and as a CTO and co-founder at Tender Armor. Other roles have included as an Applications Architect at FIS and as a Software Developer at MetiLinx.

After reviewing the data, our team has rated Keyno a Deal To Watch. Primarily, this rating is based on the extraordinary market opportunity the company wants to access. It’s also based, in part, on the common-sense nature of its solution in addressing the problems plaguing the space. The business’s security ratings as well as its compatibility with Visa are massive bonuses. When you add in the modest valuation cap of $5.5 million to $6 million, it’s tempting to consider this a Top Deal. There are, however, some reasons why we don’t believe that’s appropriate at this time.

The biggest issue is the lack of revenue. Simply put, Keyno is still too early to be fully validated. This year could change things, but investors have no idea how the company might be performing fundamentally as of this writing. This uncertainty creates extra risk, particularly around the execution side of the firm. Another issue is that while its accounting seems legal, it’s aggressive. Incurring deferred compensation like they did and capitalizing it is basically telling investors that management intends to pay itself with proceeds of a capital raise at some point. Given that the liabilities on its books for this are classified as current, this means that within a twelve-month window they expect to pay it out, likely translating to a payout from the current raise. That’s a lot of cash to pay out relative to its raise when the business should be focused on growth.

Even given these concerns, we do believe that the positives of the business concept, their compatibility with Visa, and the market potential outweigh the aggressive accounting that Keyno has undergone. It will be interesting to see where this Deal to Watch goes as it continues to develop and mature.