The Vampr team has been selected as a “Deal to Watch” by KingsCrowd. This distinction is reserved for deals selected into the top 10%-20% of our due diligence funnel. If you have questions regarding our deal diligence and selection methodology, please reach out to hello@kingscrowd.com.

Since the advent of LinkedIn, looking to social media has become commonplace in the process of job searching. In fact, to date LinkedIn boasts over 500 million users.  The majority of those users belong to finance and medical industries, followed closely by the fields of education, technology, and manufacturing.

On the other end of the spectrum is the arts, which as a whole make up just 4% of users. 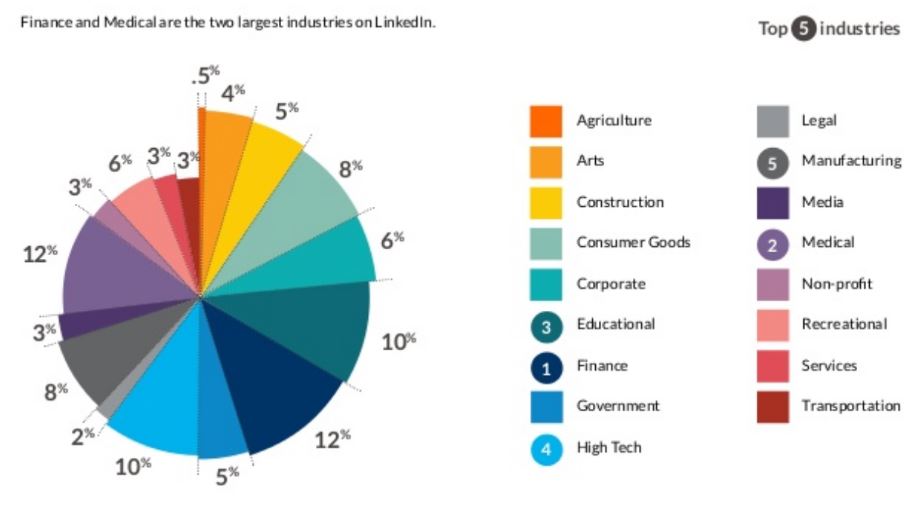 These numbers highlight the problem that Vampr aims to solve—the tools provided by the foremost site for professional networking are inadequate for the needs of the art industry. Creatives need a platform that tailors to their specific need for both connection and collaboration. In fact, a report by The Conference Board revealed that “eighty-five percent of employers looking to hire creative people say they are unable to find the applicants they seek.”

Not only is LinkedIn tailored to certain industries as evident by the user base, the arts community has specific needs deserving of their own platform. Auditioning, for example, is core to the worlds of acting and music and functionality to showcase work is not streamlined on common professional networking platforms.

Creatives need networking more than ever. A report by the National Endowment for the Arts reveals the highly entrepreneurial nature of artists, citing that creatives are 3.5 times more likely than the total U.S. workforce to be self employed.

Gig economy platforms are for just that—gigs. The name itself implies a one time, temporary job. And the gig economy ecosystem is more than familiar to artists, specifically musicians, making creatives turn away from traditional networking platforms like Linkedin that are blind to the niche needs of artists. At their core, networking platforms foster relationships. Following a study on success patterns in Broadway musicals, the Art Business Journal deducted that even for creatives “it isn’t about what you know, but who you know.”

The Vampr team has identified a significant pain point in the social networking market which brought in over $40 billion in revenue in 2019 and has a steady annual growth rate at around 29%.

Broadly, networking platforms and gig platforms exist for the creative user bases. What differentiates Vampr is its unique combination of encouraging not only connection, but collaborations and networks.

To date, over 24 million swipes and 4 million connections have been made across 198 countries. Vampr adds 48k new users monthly and the cost of onboarding is 9 cents per user.

Competition includes marketplaces like Fivver, that leave out the networking component. Perhaps more notable are direct competitors seeking out the same space.  The Dots, for example, featured in a 2016 Forbes article, aims to be the “creative industry’s answer to LinkedIn.”  The London-based company remains private and has raised 5.5 million pounds to date. Though well into funding, The Dots appears to solely target the European market and is therefore less of a near-term threat.

Other competition includes Jammcard, also early stage and based on an invite-only application system. ReverbNation, another site that just gained series C funding, appears to be playing in a field more closely to that of The Dots, again offering a web-based platform and targets both fans and artists.

Reverbnation is, however, unique to the music industry. At Vampr’s current stage in product development, Reverbnation is a close competitor, but if Vampr closely follows a growth plan to integrate and tailor to different types of artists (visual, photographers, filmmakers, etc.) in the future, it will quickly differentiate, making Reverbnation an indirect competitor.

The Vampr team has plenty of experience in both the music industry and in the world of startups.

Co-founder, Baz Palmer, has founded several companies that are still up and running, including Soundhalo, and is a guitarist and songwriter himself.  His other current entrepreneurial endeavour, Weyo, an AR app for kids, is still very early stage.

Co-founder, Josh Simons is a songwriter/musical artist who understands the pain points of a professional artist. He is also an advisor to several companies including Emanate, a blockchain product for the music industry, as well as Mindset Health and Digital Lode.

Vampr provides a freemium product that has 450,000 active users that brings in revenue from contextual ads and content promotion. Average revenue per user sits at $1.20 and makes up 30% of projected revenue by 2020.

Vampr plans to roll out a Premium suite that is currently fully scoped and crowd tested.  The Vampr Pro subscription includes profile boosts, verified accounts, and additional hosting space. Average revenue per user sits at $2.69 and makes up 70% of projected revenue by 2020. 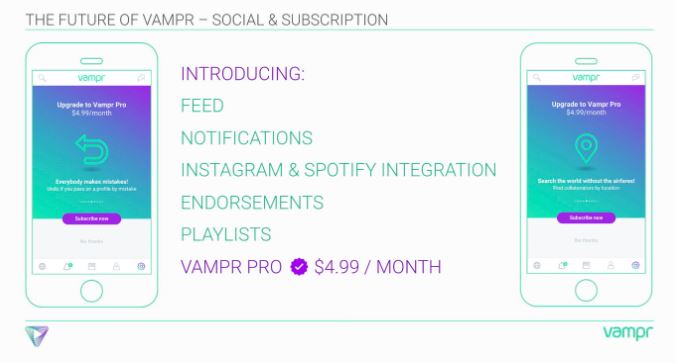 1. Networking Paired with Auditioning Features: Much of Vampr’s competition falls into one of two buckets—gig marketplace or social network. Vampr joins the gig market, while creating a meaningful network along the way, differentiating it from competition. The Vampr product, also unlike competition is app-based making for a cleaner, more casual and streamlined user experience.

3. Scalability and Untapped Market Potential: Vampr is truly creating a first-of-its-kind, vertically focused professional social network for creatives. No one to date has effectively serviced the music industry and creatives including filmmakers, photographers, graphic designers, and visual artists with a social network solution that lets them develop their career.

We have already seen vertically-focused platforms in the career social networking space, like Angellist, which was created to service startups in hiring and capital raising. A solution like this for creatives makes all too much sense, and as an early mover in the space, Vampr is poised to grab customers at a low cost due to pent up demand and a lack of good options in the market.

Not surprisingly, the cost of customer acquisition to date has been $.09, which on a value of $1.63 per user annually provides a nice margin for the business. This helps create scalability over time, and as network effects take hold (aka more users make the platform more valuable) the easier it becomes to continue to grow the business.

Finally, with the addition of Vampr Pro comes an additional revenue source beyond advertisements, much as LinkedIn has done quite well.

4. Future Partnerships:  Vampr has exciting plans for the next five years, including a partnership with Emanate, a blockchain based platform that aims to make royalty payments for artist occur in near-real time. By integrating with Emanate, Vampr will become a comprehensive platform for creatives to build their artistic careers while monetizing them effectively.

Vampr is a Deal to Watch. Though the large market size is not necessarily indicative of the niche user base that Vampr targets, we can assume that the majority of the applicable market does not use existing platforms due to a lack of services core to the creative community. Vampr’s early traction supports this theory.

Though, the field of professional networking services is crowded with large incumbents like LinkedIn that offer broad services, there are few legitimate contenders vertically focused on servicing the landscape of creatives, which provides Vampr an opportunity to become a leader in an underserved market.

Vampr is still very early stage and has quite a bit of development to undertake, but the road ahead looks clear and promising. LinkedIn was acquired by Microsoft for $26.2 billion.  ReverbNation’s last funding type was Series C, with nearly $9M raised to date and has itself acquired some small companies in the space. Though there is little to directly compare to Vampr, a positive acquisition is certainly possible in the future either to a broader network such as LinkedIn, which will look to service other niches in the future such as creatives as its options for growth slow, or by a larger media or gig economy entity.

Challenges lie ahead in reaching saturation by ramping up new user onboarding, as well as retaining existing users. Regardless, Vampr has identified a pain point and offers a promising solution with immense untapped market potential. Invest in Vampr here.