The Voxello team has been selected as a “Deal to Watch” by KingsCrowd. This distinction is reserved for deals selected into the top 10%-20% of our due diligence funnel. If you have questions regarding our deal diligence and selection methodology, please reach out to hello@kingscrowd.com.

Each year in the US, 5.7M patients are admitted to the Intensive Care Unit (ICU).

With the number of critical care beds rising and the shortage of nurses, clinical pharmacists, and respiratory therapists persisting it is projected that there will be a 35% shortfall of needed intensivist hours by 2020.

This shortage leads to less than stellar care and outcomes for patients that need it the most. It is estimated that 250,000 of these yearly deaths are avoidable. One third of these avoidable deaths are due to communication errors. 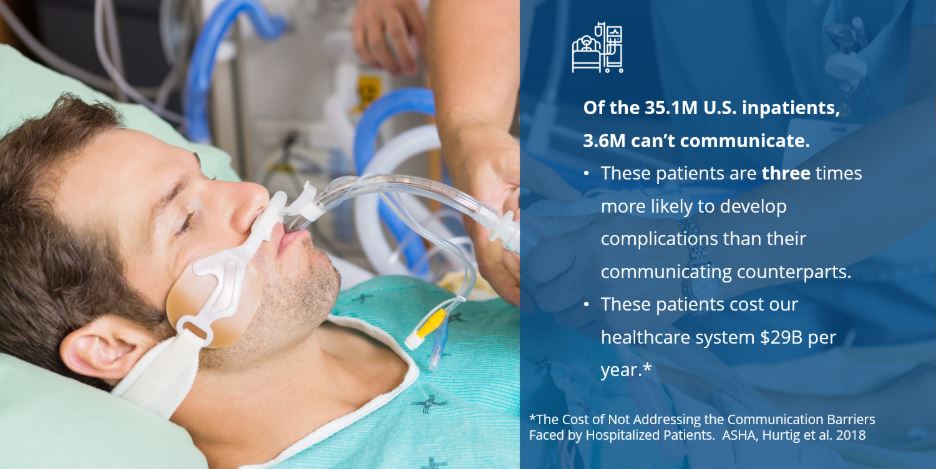 With most patients suffering from debilitating illnesses and innumerable wires and tubes reducing mobility and vocal communication, it’s immensely challenging for already stretched staff to effectively communicate with these patients.

Whiteboards and image boards are the standard of care but these hardly meet the needs of hospital staff and patients in trying to provide the right care.

The healthcare system needs a device that can allow patients to communicate their needs without fine motor skills and/or adequate ability to speak. A solution to communication issues is now being solved by Voxello’s device called the Noddle.

Voxello has invented a device called the Noddle that can provide communication and access solutions for acute and long term care. The patented noddle recognizes small intentional gestures to allow the patient to access a nurse call button and communicate via Voxello’s noddle-chat.

The Noddle is already being used in hospitals in Iowa and in an exit survey of patients who used the Noddle during their stay reported 84% more satisfied than patients who did not use it who reported 59%. 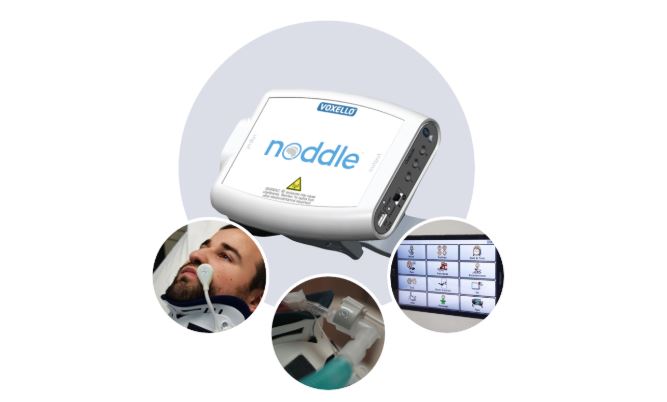 The efficiency of the Noddle cuts down essential time that may be lost while interpreting current methods of outdated communication. Addressing critically ill patient’s needs in a timely and efficient manner is crucial to impacting patient outcomes and helps reduce patient-provider stress and frustration by allowing for easy communication.

Alongside its clinical and operational value, the Noddle’s financial value has the potential to save hospitals billions of dollars while driving better outcomes. It potentially reduces preventable adverse events, which could eliminate $1B in costs for a single health care system. It can also create efficiencies in care by removing workflow backup associated with communication barriers.

The Noddle is an easy to learn plug and play device that detects small, voluntary actions such as tongue clicks via various sensors, allowing patients to call the nurse and control the speech generating devices. The product is comprised of the platform, the sensors, and the software.

Voxello began at the University of Iowa as an Iowa Medical Innovations Group (IMIG) student project. Voxello has a signed distribution deal with Saltillo. The IP has been obtained for the Noddle and a provisional patent on the Min-Mo Sensor.

Voxello has created a device with virtually no competitors since it is the first reliable, affordable, and cohesive care method for caretakers to communicate with nonverbal patients.

Voxello is currently supporting a soft launch to luminary sites, and has 5 beta distributors on board.

Richard Rives Bird is the CEO of Voxello with a background in business, engineering, and marketing. Before becoming CEO of Voxello, Richard was CEO of Rives Audio that changed the way acoustical engineering and design is distributed. He has a background in medical devices from his time as VP at Medical Optical Imaging that developed a breast imaging system.

He was also associate VP at Lorad/Trex Medical (now Hologic) where they created a patented method for using a surgical cutting device, which revolutionized large core minimally invasive stereotactic biopsy.

Jerry Stack is the Chief Operating Officer of Voxello with a background in engineering. Before Voxello, Jerry was the Global Director, Product Assurance and Lab Operations of Whirlpool Corporation. He attended the Virginia Military Institute earning a Bachelor of Science in Mathematics. He earned his Masters of Science in Industrial Engineering with concentration in Quality and Reliability from the University of Massachusetts, Amherst.

Victoria Dahlen is the Manager of Engineering of Voxello with a background in medical solutions and product development. Before Voxello, Victoria was a manufacturing engineer at CIVCO Medical Solutions where she developed and executed a new product. She earned her Bachelor of Science in Engineering and Biomedical Engineering.

Richard Hurtig is the Chief Scientific Officer and Founder of Voxello with a background in teaching. He works on IP development and clinical trials for Voxello. Before Voxello, Richard was a professor at the University of Iowa for 37 years. He earned his Bachelor Degree in English from New York University and his PhD in Psychology from Columbia University. Richard also serves as a member on the Board of Directors for Voxello.

1. Strong Stakeholder Incentives: As this market remains relatively untapped, expanding the client base should continue to progress as usability is established. Stakeholders would be investing in a new and novel device that is simultaneously saving lives. Since Voxello has already established a distribution partnership with Saltillo, the world leader in speech generation device technology, Voxello can tap into Saltillo’s established distribution model and client base. The opportunity to invest in a company that little current direct competition is very rare in the constantly changing medical device field.

Voxello is also gearing up to provide a translation solution for hospitals to better serve the 47M people in the US that speak English as a second language who might end up as patients in a hospital.

2. Strong Monetization Opportunities: The Noddle and included software is a one-time purchase, which can be used for years. The sensors, on the other hand, will need to be replaced an estimated 30 times a year, resulting in a “razor, razor blades” financial model, which will support continued growth.

Kits will be sold to hospitals and extended living facilities through dealers and distributors, with profit margins north of  70% for the Noddle device and between 70% and 80% for each sensor.

3. Large Addressable Market: The assistive technology global market size is $15.9B. Not only is the market for a medical device like this vast, but it is also untapped. There is nothing like Noddle on the market today.

Whiteboards and communication boards are obsolete in this age of technology, and it’s time nonverbal patients are provided with the means to effectively communicate their complaints and symptoms.

Voxello is a Deal To Watch. With a lot of room for disruption, minimal direct competition and a large market opportunity, we think Voxello is nicely positioned to become a stalwart medical device in this space.

With Voxello already being utilized in the hospital setting and ready to go-to-market we feel some of the risks associated with early stage medical device companies are mitigated.

While the Noddle is a new device that most patients have not had access to yet, there is a large possibility for a positive acquisition for Voxello due to the attractiveness of the market.

Arsenal Capital Partners, a private equity firm that caters to middle market industrial and healthcare companies, may be interested in acquiring Voxello as it has already acquired 17 similar startups ranging from $45M-$115M.

Since Voxello has a larger addressable market and less competition than the other startups Arsenal Capital Partners has acquired, it is likely Voxello could be acquired for more than the previous acquisitions.

The challenge will be continuing to prove its value in the healthcare setting above the current standard procedures in order to drive continued adoption. Selling through to hospitals in an area as sensitive as the ICU can be incredibly challenging, time intensive and slow moving. This is our largest concern for the business.

If interested, be sure to invest in this Deal To Watch HERE.