The Status Money team has been selected as a “Deal to Watch” by KingsCrowd. This distinction is reserved for deals selected into the top 10%-20% of our due diligence funnel. If you have questions regarding our deal diligence and selection methodology, please reach out to hello@kingscrowd.com.

Personal finance is not a particularly strong suit for most Americans. Between the high cost of hiring a financial advisor and the personal stigma associated with money issues, most Americans forego professional advice. Status Money is about to change this. With the advent of social networking and mobile proliferation, the company has designed an ecosystem focused on getting individuals to talk more about their finances.

85% of households in the US are not served with regular, relevant advice from the financial advisory industry. In addition, nearly 40% of American adults can’t afford to cover a $400 emergency expense.  This includes cash on hand, by using a savings account, or through tapping a credit card that they would be able to pay off quickly. Of this 40%, 27% would need to borrow or sell something in order to cover the charge, while 12% says that it would not be able to cover the expense at all. A further 17% of American adults have stated that they would not be able to fully pay off their current month’s bills. A separate study found that only 37% of American adults want to talk openly about their money.

This highlights a significant, systemic problem in the US. There exists a juxtaposed environment where on the one hand you have a large swath of the population in need of financial advice.  On the other hand, you have only a minority willing to discuss their financial condition with others. This is despite the fact that 51% of American adults believe that society would be healthier if individuals were more open about finance.  That number is even higher, at 71%, for Millennials. 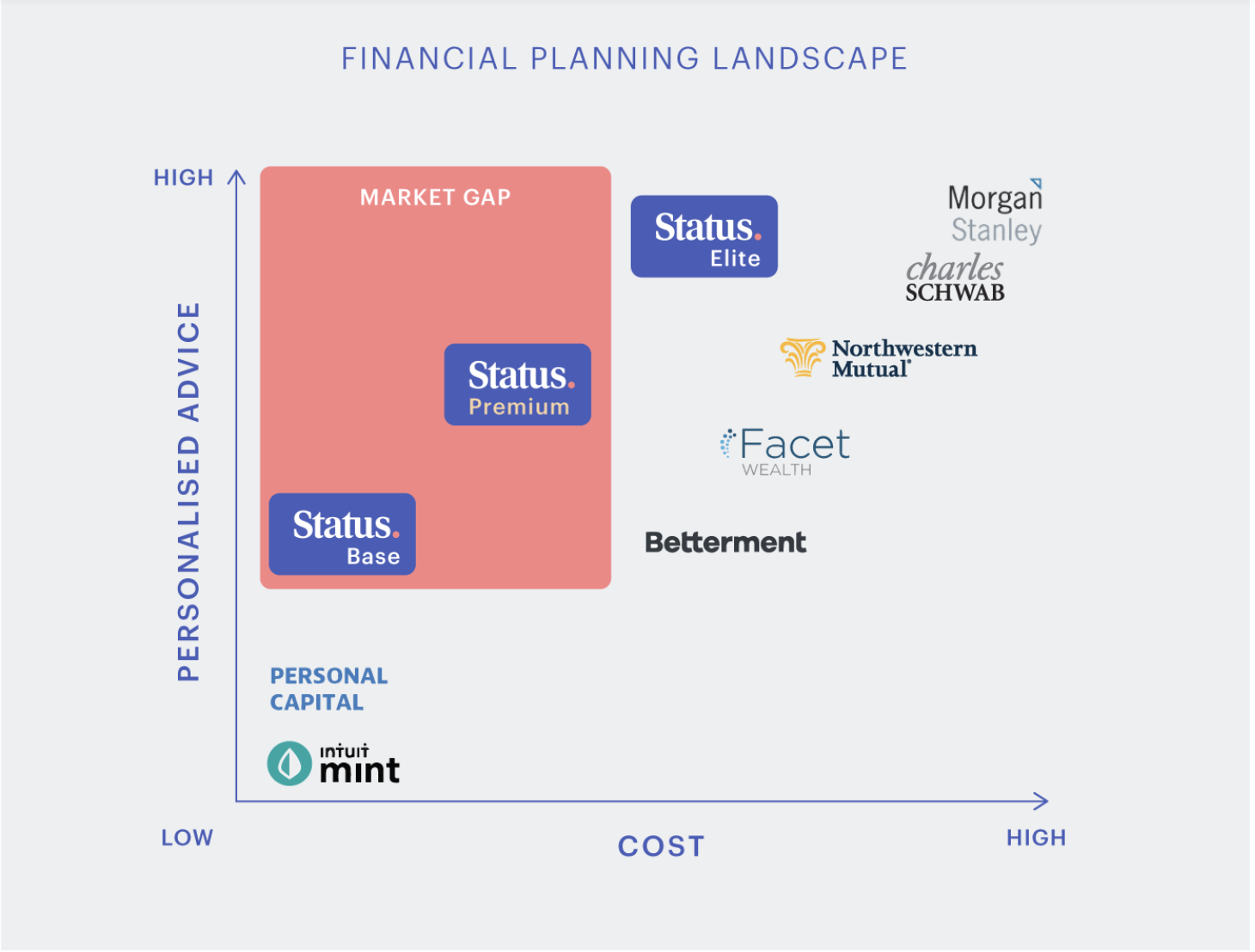 The goal of Status Money is to democratize access to financial information.  This can be done by anonymizing, crowdsourcing, and customizing it to fit their users’ needs. When users create an account on the Status Money platform, they can link their financial accounts to it.  This enables the creation of a customized financial profile. With that in hand, they can then, anonymously, share this information with other users and compare it with others as well. Users can communicate with one another, share tips and insights, and earn cash rewards for referring friends and acting on personalized recommendations.

Status Money has a wide range of options that users can explore.  These range from algorithms that will analyze users’ account balances and transactions, to interest rate comparisons. The platform can also offer cash flow projections to help users glimpse into their financial futures. The company’s service provides credit monitoring and alerts.  Budgeting tools that permit you to set spending limits and income goals using your peers as benchmarks are made available as well.

While many of Status Money’s offerings are free, there are two upgrade options available to its users: Premium and Elite. Subscribers to the company’s $20 a month Premium option have access to the platform’s free content, and they receive a variety of additional features as well. These features include discounted financial planner access, doubling of the rewards points, chat with a financial advisor, and more. The Elite option, for $80 a  month, provides this plus unlimited financial advisor chat, a personalized financial plan, the ability to export data, and triple the rewards points. 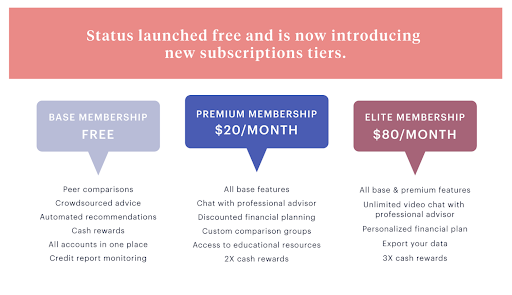 Since its launch in September of 2017, the company has seen rapid growth, expanding to more than 263,000 registered users. The firm boasts a 93% retention rate since inception, indicating a high satisfaction rate amongst its user base. To capitalize on this large and growing population on its platform, management has a few thoughts in mind. Revenue from advertising and its premium subscriptions are a given, but the firm also hopes to generate revenue from selling data. Through a data and analytics portal, the company will allow third parties to look at the information they have on the ecosystem.  Next year, management is also planning to launch subscriptions for financial advisors. These will give the advisors access to analytics pertaining to their clients’ accounts. 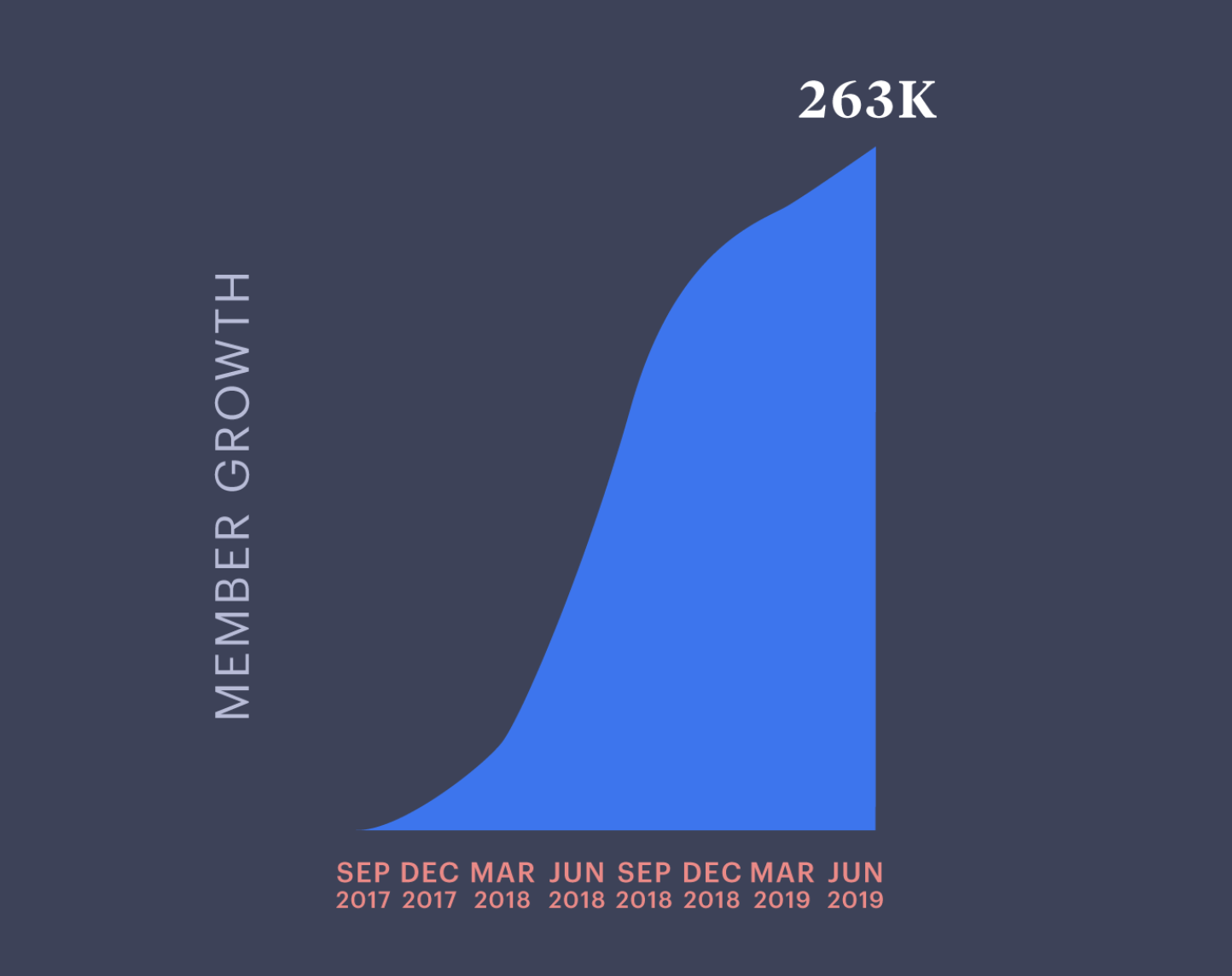 Management and the investors who have put $9 million toward building the platform already have high expectations. This year, Status Money is forecasting that it will generate $1.1 million in revenue. Next year, the goal is $7.8 million. If the targets are being achieved then it will mean the platform has significant value.  It is worth mentioning, though, that despite being operational all of 2018, the firm’s financial records show that sales were only $42,068. With 2019 mostly over, a status update from management has not been released as of this date, showing how close they are to their target.  Absent of that, we are left relying on the uncertainty of their forecast. 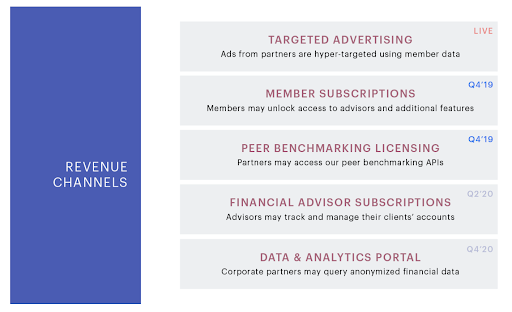 In its marketing materials, Status Money estimates that its total addressable market is $36 billion. This market is defined as “acquisitions marketing by US banks via direct mail and affiliate channels.” The intent is to encourage US banks to transition from the use of direct mail and other options, to advertise instead on the Status Money app. This is undoubtedly an opportunity for the company, but given the structure and nature of the business, it’s short-sighted to leave it at that.

It’s important to keep in mind that in 2017 the industry, globally, was worth $192 billion On the digital marketing side. By 2020, this is set to hit $306 billion. Last year, 38.3% of all ad spending was allocated toward digital opportunities, up from 31.8% two years earlier. Between 2017 and 2018 alone, the growth rate of digital ad spending was 12.6%.  This was three-and-a-half times greater than the 3.6% growth rate the broader advertising industry exhibited. In short, an emphasis on digital marketing is a solid approach the firm should take. A key niche within digital advertising, though, that might be worthwhile is influencer marketing. The social aspect of the company’s platform could make this a natural source for the company. If they do pursue this route, the opportunities could be significant, thanks to the strong growth seen in recent years. , influencer marketing was only a $2 billion slice of the digital marketing space in 2017.  By next year it’s forecast to be $10 billion. 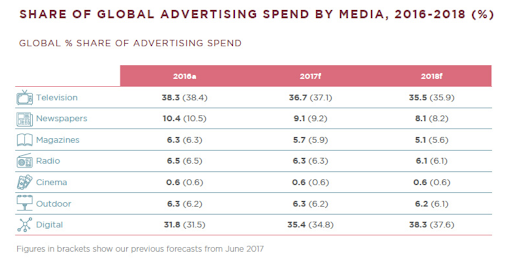 Another way to consider Status Money is through the lens of the financial advisory space. This is a large market, worth about $57.6 billion this year after posting a CAGR of 6.4% dating back to 2013. Over the five years ending in 2017, the niche RIA (Registered Investment Advisor) category of the segment grew by 59%.  This occurred as more financial advisors moved to independent firms instead of the large chain employers. Between this transition and looming retirement for an aging group, 40% of all financial advisors are planning to leave the industry in the next 10 years.

The next few years will prove incredibly important for the financial advisory industry. Over the next 25 years, younger generations will accumulate more than $68 trillion in assets associated with wealth transfers, $18 trillion of which will come from inheritances. This comes, though, at a time when one-third of Americans have no retirement savings at all, and an additional  50% have less than $10,000 saved in their bank accounts. This disparity between the haves, the have-nots, and the soon-to-haves is a golden opportunity for the right players in this space.  It seems that many in the financial services space already understand this. This year alone, financial services brands will spend $15.25 billion (70% via mobile) on digital advertising.  This is up from only $8.78 billion three years earlier. Naturally, this can prove fertile ground for Status Money to play in.

The goal of Status Money, in its current capital raise, is to receive aggregate investments of between $25,000 and $250,000. As of the time of this writing, more than 100 investors have agreed to allocate $54,354 to the business. All investments being made are in exchange for a SAFE note. Instead of granting equity outright, a SAFE will entitle the company’s investors to stock up on the next equity raise. The conversion will be done at a 10% discount to the company’s valuation, subject to a valuation cap of $25 million. The minimum investment per investor in this raise is $100.

Status Money has two core members: Majd Maksad, its CEO, and Korash Hernandez, its COO. Maksad has more than 10 years of experience in the credit card industry.  He served, at one point, as the Head of Digital Marketing Analytics for Citi Credit Cards. He has also held analytics roles at the firm in its Digital Payments, Product Management, and High-Risk Management divisions. Hernandez has similar experience.  Previously, he was employed as Head of Analytics for Citi Digital Credit Cards Acquisitions. Prior to his time there, he was a Vice President at Goldman Sachs and before that he led the Fraud & Credit Modeling division at T-Mobile. His overall relevant work experience in the financial services industry exceeds 15 years.

The Status Money concept is innovative, disruptive, and intriguing.   Early results have shown that there’s a significant market of users interested in what the service offers. Data also shows that, so far, these customers have remained loyal, to the brand.  On top of this, the industry the company operates in is large and going through changes that could be accretive to the business. There, are, though, risks to consider. All encompassing, this indicates Status Money  a “Deal To Watch” designation instead of a “Top Deal.”

First and foremost, there’s revenue uncertainty. Management is forecasting $1.1 million in sales this year, but no results have been released to date.  Last year’s sales are far removed from that target. This means that no inference can be made as to whether 2019’s results will be in the ballpark management suggests. Another issue to consider relates to profitability. At this early stage, investors should expect Status Money to generate losses, but 2018’s loss was a staggering $3.86 million.  This was more than double the $1.66 million loss seen in 2017. Operating cash outflows for the year were $3.08 million, up from $1.66 million in cash outflows seen a year earlier. Unless something monumental happens, even achieving their revenue target for the year would imply massive losses for the company. Given the size of these losses, the $250,000 ceiling on the raise the company is trying to close now is little more than a rounding error.

What this implies is that, unless management is correct about strong growth in 2020, it’s highly likely the firm will need to raise still more capital. Already, the $25 million valuation cap on the SAFE appears lofty given no evidence of 2019’s results.  If these figures can be backed up with reliable data, then the story changes. Until such time, investors should consider this an attractive prospect, but one that’s not without performance risks. If management can straighten out those concerns, the upside could be robust, but until then it would be wise to approach this with a margin of safety.