Upshift has been selected as a “Deal to Watch” by KingsCrowd. This distinction is reserved for deals selected into the top 10%-20% of our due diligence funnel. If you have questions regarding our deal diligence and selection methodology, please reach out to hello@kingscrowd.com.

The carsharing space has seen tremendous growth in recent years.  Even so, it is still undergoing an impressive surge in demand. In cities across the globe, the industry is seeing more consumers adopt their services instead of relying on the old models of either leasing or owning a vehicle. This creates an opportunity for companies, even those new to the space, to jump in. With its own twist on the business model, the management team of Upshift has decided to step in. Their monthly subscription packages provide yet one more way for customers to take part in this paradigm shift. If the company can scale up enough and do so fast enough, it and its shareholders stand to benefit handsomely.

Mobility, particularly within cities, can be costly. In addition to the cost of a car loan and/or lease, consumers are hit with insurance costs, fuel expenses, and the inevitable repairs that come with a car (if you own it). Perhaps the worst aspect of owning a vehicle in the big cities, though, is the cost of parking. In its own estimates, Upshift used a figure of $275 per month, but in some parts of the country it can be higher. In parts of New York City, parking can cost up to $1,200 per month. One way to reduce some of these expenses is to buy a used vehicle.  This allows you to pass up or at least mitigate the monthly payment. However, this method has its downsides as well. This includes higher risk for near-term repairs and the loss of prestige from not driving the newest model out there.

There are several types of business models in the carsharing space. The only thing unique about Upshift is the flavor of its model. At its core, the company is operating a basic, but quality, subscription service. At this time, it has two types of vehicles in its fleet: a Toyota Prius Hybrid and a Ford Escape SUV Hybrid. Users who have signed up for Upshift’s service can text the company.  In as little as 30 minutes, an employee will drive up, hand off the keys, and the customer is ready to go. This concierge delivery appears to be one selling point Upshift prides itself in. It certainly does beat having to go to another destination to pick up the car you want. 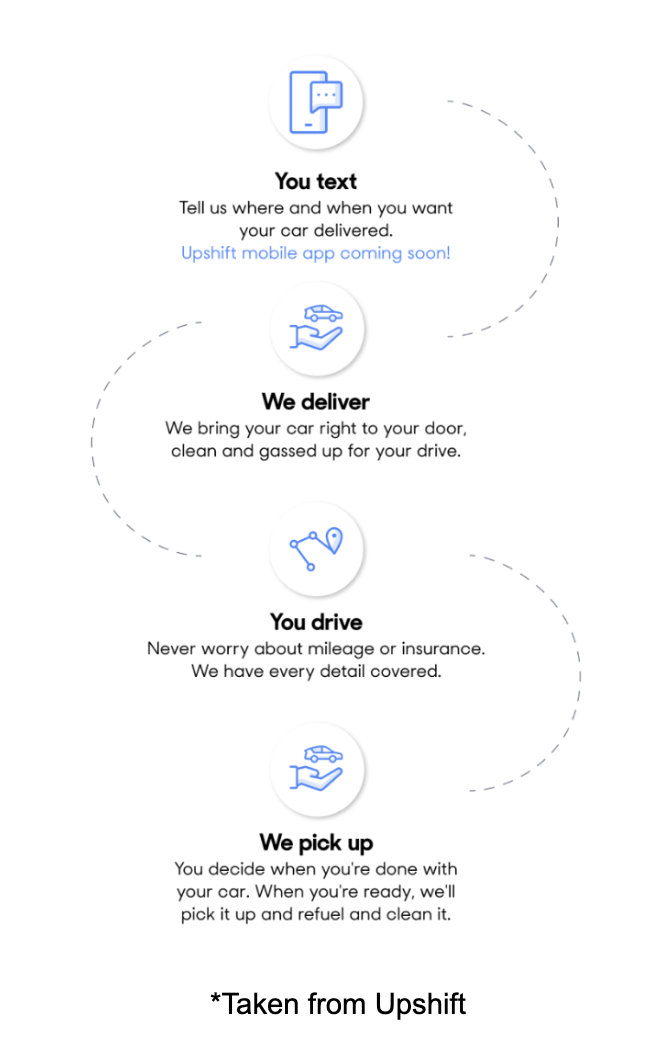 At this time, the company offers three different monthly plans. These can be seen in the image below. In short, the business offers a 4-day / month plan for $259, an 8-day plan at $439, and a 12-day plan at $589. When the user is done driving the vehicle in question, they leave it, and an employee picks it up, cleans it out, and refuels it. This all comes at no extra cost. As of this writing, the business has around 1,500 accounts, plus it has a further 1,500 accounts waitlisted until the business can grow more. Though this sounds appealing, only 99 of its accounts are paying customers at this time. Another 50 are on the firm’s waitlist. The 99 paying comes out to $261,000 in annual revenue, while the 50 additional users will grow projected sales by $135,000. This is impressive considering the company’s services are only available in San Francisco. 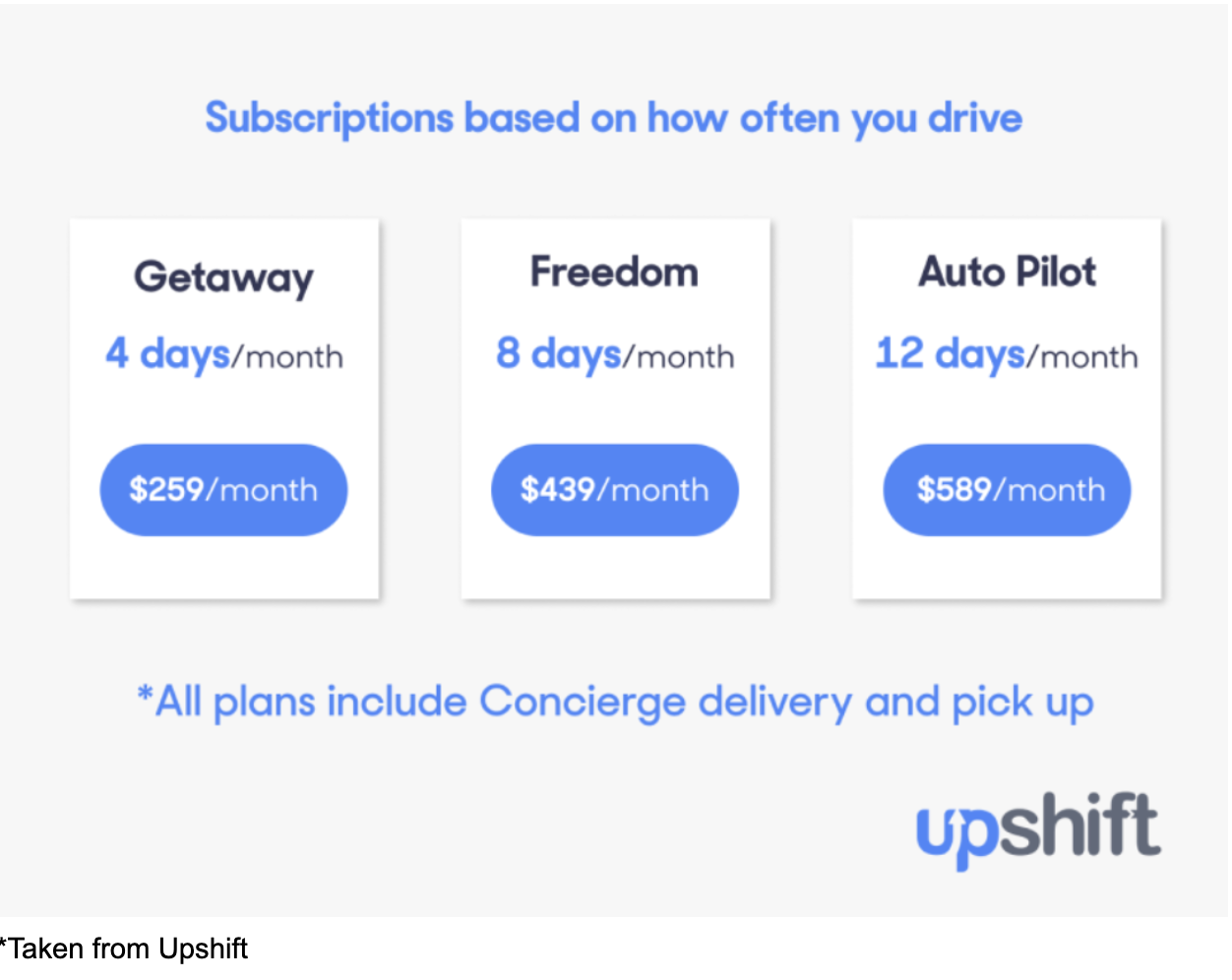 Since its founding, Upshift has facilitated more than 3,000 trips and it boasts a 94% paid subscriber retention rate. This has helped the company raise $900,000 in financing already, and it hopes to use additional funding to continue its expansion. The company also at this time has a partnership with Ford. This partnership will see Ford install certain hardware and software into two of its Ford Escapes.  This will allow data to be shared from those vehicles to Upshift’s applications. 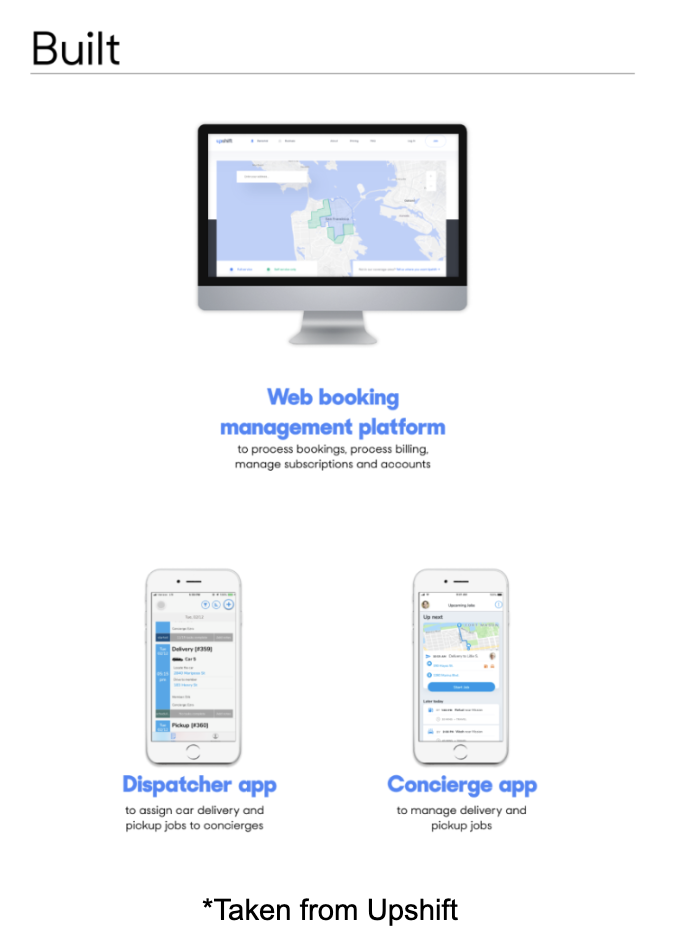 Speaking of app, the company already has two: a dispatcher app and a concierge app. It also has a web booking management platform. The company is developing other technologies aimed at improving operations as well. It is working on a consumer-facing app that will allow users to book, locate, and unlock cars. It will also permit users to manage their accounts through it. Between the technology being placed in that app, its existing technologies, and new technologies being worked on, the company will be able to access detailed logistics and will even be able to perform comprehensive fleet maintenance activities without disrupting its customers’ behaviors. 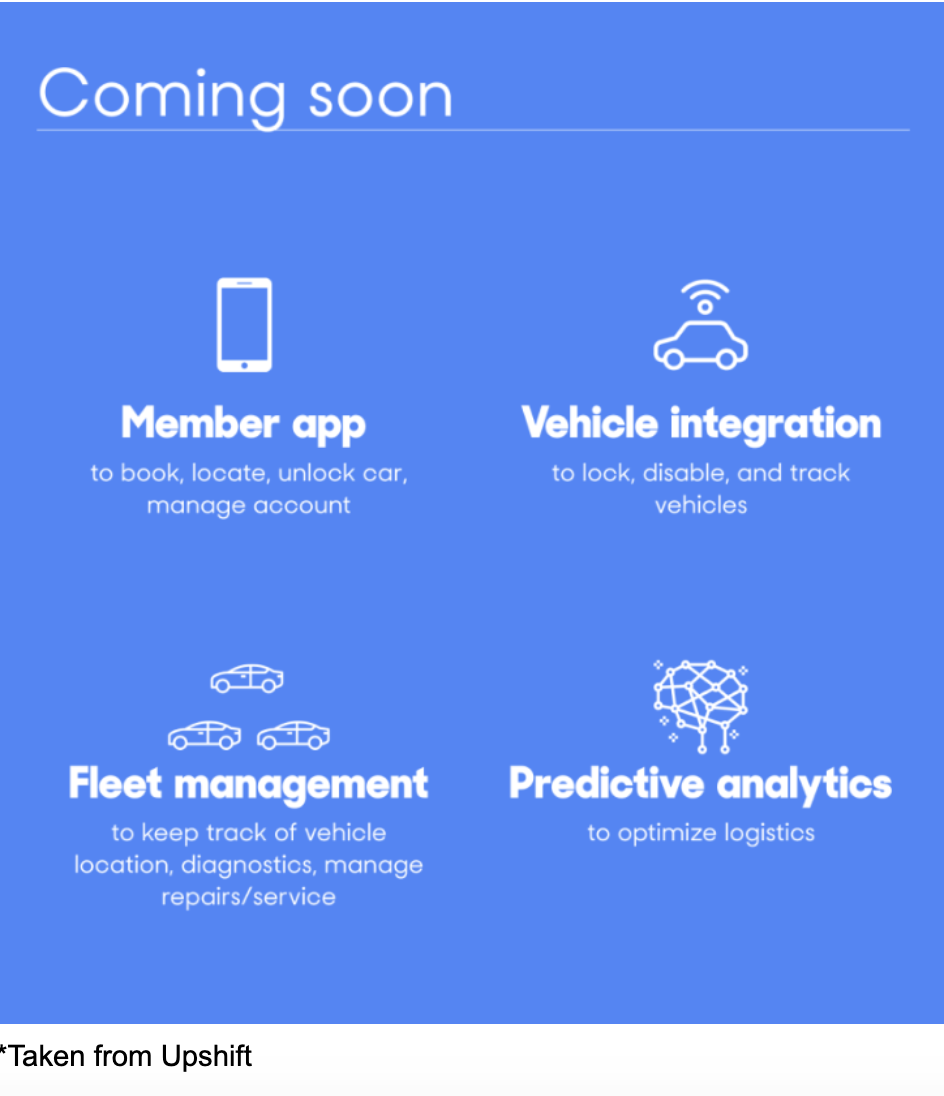 Over the past two years, the financial picture at Upshift has been less-than-ideal. For a company in a high-growth industry, its revenue growth was disappointing. Between 2017 and 2018, its sales grew only 17.7% from $55,115 to $64,847. Net income during this period deteriorated, dropping from a net loss of $48,692 to a net loss of $233,213. Operating cash flow over the same period of time moved from -$58,754 to -$219,555. Considering the financial investment required to have and manage its fleet, and to perform the buildout of its technology, these results aren’t surprising. It just isn’t great either.

While Upshift has done well to raise capital over time, the company has had to take on significant debt in the process. Total debt as of the end of 2018 stood at $388,046. This excludes $7,295 in the form of accrued but unpaid interest. One might think that the company would have significant assets to cover itself since it has cars in its possession, but that would be incorrect. Its vehicles right now are leased to it. Total equipment at the end of last year was only $55,996.

The carsharing market is nothing new. Far from it. At last count in May of this year, there were 236 individual operators spread across 3,128 cities worldwide. The largest player in the space appears to be Zipcar, with over 1 million members to its name and more than 16,000 vehicles in its fleet. Even in light of this apparent saturation, the market is projected to see significant upside over the next several years.

By one estimate, global revenue in the carshare market totaled only $1.5 billion in 2017. No matter how large it is, the expectation is for it to continue growing for the foreseeable future. One source suggests that between 2018 and 2024, the global market should expand at a CAGR of 20%.  If this comes to fruition, then by 2024 the industry should be $11 billion in size. Another estimate is placing growth at a more modest 11%, but with an outlook by 2025 of $10.8 billion. A third estimate suggests that by 2024 the market could expand to as much as $12 billion. If pressed, management will say that they are creating a new market worth about $26 billion. This is several times larger than the $3.3 billion they assert the carshare market is today, but their logic in defining a ‘new’ market is sketchy. This is not to say that their value proposition isn’t different than their peers.  On the driver count side, a report by Frost & Sullivan indicated that the number of carshare customers will grow from about 15 million globally today to more than 35 million by 2025. 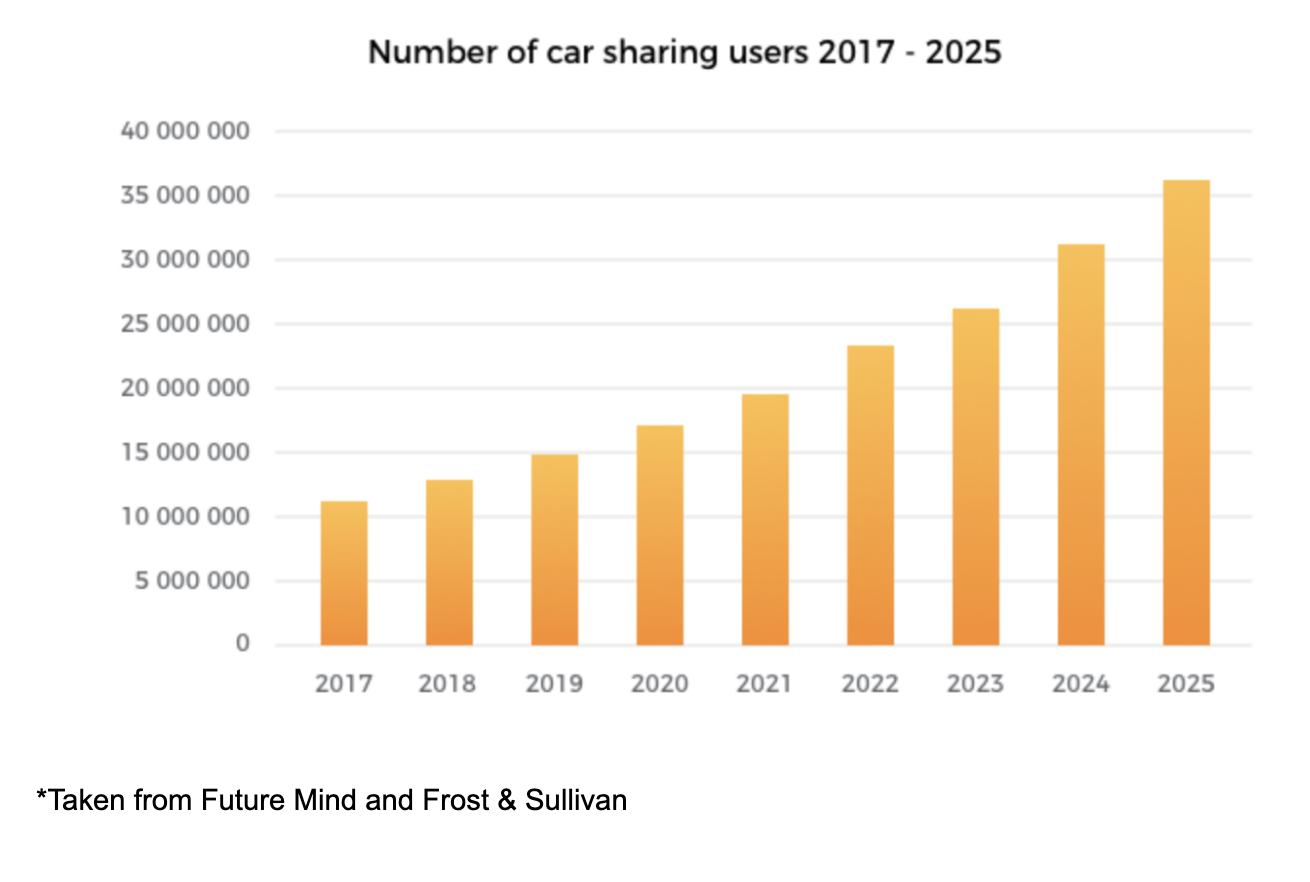 To understand how they differ, it would be helpful to compare their service to a couple of their peers. Upshift’s monetization and subscription strategy has already been discussed. The strategies employed by rivals Zipcar and Fair have not, however. Zipcar, according to its website, charges users either a monthly fee of $7 or an annual fee of $70. This is irrespective of whether the user in question actually utilizes the company’s fleet. When they do go to a lot and pick up a vehicle, they are charged $8.50 per hour. They are allotted 180 miles per day, after which they are charged $0.45 per extra mile. The user also must drop off their Zipcar by a certain time unless they request an extension. Failure to do so will result in a $50 late fee. Every Zipcar user receives a gas card, so fuel is included in their costs. Fair, meanwhile, operates on a strictly subscription basis, with prices starting at $130 / week. All costs, maintenance, etc.… are included, but it requires a startup payment of $500.

Like many of the startups on the market today, Upshift has elected to approach its current capital raise from the perspective of issuing a SAFE. This security is not equity and it’s not debt really. In short, investors buying in today are guaranteed the right to convert their SAFE note into equity at a future period of time. This conversion will be done at a 20% discount to the next incoming investors, and will be subject to a valuation cap of $8 million. As of the time of this writing, Upshift has received pledges for $25,265. This places it just above the $25,000 minimum the business needs to close the deal, but it’s still quite far from the $1.07 million maximum being sought.

At this time, there are two core members behind the Upshift team: Ezra Goldman and Ayako Hiwasa.  Both of these individuals are co-founders of the business. Ezra currently serves as Upshift’s CEO. Prior to that, he worked at MIT MCP where he participated in city planning activities. Before that, he worked at eScootershare, and even earlier he was at Dockless Bikeshare. He has also worked as a driver for Lyft, has served as a consultant, and was in charge of operations at ReachNow. Ayako, meanwhile, currently serves as Upshift’s head of operations. She focuses on process optimization and managing logistics. A prior role she had was as a host at Impact Hub Oakland.

After careful consideration and thorough research, Upshift has been rated a “Deal to Watch”. The company has managed to generate revenue in at least the past two years.  It has an interesting take on the carshare market that could prove attractive to the right audience. It also has a waitlist ready to hop on and grant it even more revenue. Its partnership with Ford is encouraging, and the company is jumping into a market that looks poised for significant upside in the future. There’s no doubt that it is far behind some of its peers, and investors should weigh this accordingly.  But in a market that can grow by up to 20% per annum over the next several years, the tide might raise all ships.

Fundamentally, Upshift could use a lot of work. The firm’s revenue growth is slower than it should be for its size (from 2017 to 2018 it was at least).  Its mounting losses and cash outflows are not great, but also not wholly unexpected either. Add to this the debt on hand, and the company most certainly needs an appropriate infusion of capital. It is because of these downsides that there are considerable risks to keep in mind just as there’s the potential for significant upside.