*$3.5 million valuation cap is for the first $100,000 committed to its current round.  Any amounts above that will be subject to a valuation cap of $4 million.

The Wifigen team has been selected as a “Deal to Watch” by KingsCrowd. This distinction is reserved for deals selected into the top 10%-20% of our due diligence funnel. If you have questions regarding our deal diligence and selection methodology, please reach out to hello@kingscrowd.com.

The internet is a wonderful thing for so many reasons, but with the rapid pace that it has raced across the globe, a number of opportunities have been overlooked. One of these is the ability for firms to take charge of their internet-generated data to better understand, market, and cater to their customers.

This is where start-up Wifigen, a small but focused firm dedicated to empowering their clients to take charge of their data opportunities, comes into play. The company, through its early-stage platform, collects data from users who access a company’s WiFi network, analyzes that information, and gives it to the owners of the business so that they can monetize it in any way possible instead of letting an opportunity slip by.

Companies pay a modest amount of money every month for access to the internet and to give their customers the ability to access it via WiFi. The purpose here is to give customers yet one more reason to visit their business and stay there, since the more users stay on a firm’s property (especially when it comes to a retail or restaurant environment), the more likely they are to spend money there. Today, having access to free WiFi has become practically expected, but even though the cost to companies is often immaterial, valuable data that could improve their operations is slipping by.

Every person who steps inside a restaurant or some retail establishment is a collection of data points, ranging from when they came in, to how long they stayed there, to what they purchased, and more. In the past, before the modern technological age, collecting and organizing that data and figuring out how best to utilize it would have been costly and cumbersome, but with the advent of opt-in internet access via WiFi, it has become conceptually simple and cost-effective.

Every person who steps inside a restaurant or some retail establishment is a collection of data points, ranging from when they came in, to how long they stayed there, to what they purchased, and more. In the past, before the modern technological age, collecting and organizing that data and figuring out how best to utilize it would have been costly and cumbersome, but with the advent of opt-in internet access via WiFi, it has become conceptually simple and cost-effective.

Through its software, Wifigen ensures that when a customer at a retail establishment or restaurant accepts the terms of the free WiFi there, they are consenting to the collection of certain information that allows the firm to create individual customer profiles with specific data contained therein. Using this information, Wifigen’s AI-powered platform allows its own clients the ability to engage in target marketing and to focus on customer retention.

One example of a possible offering provided by management is that when a user walks into a coffee shop, they might be able to place an order from their seat as part of the opting-in process to the WiFi network.

At its core, the business model and monetization strategy for Wifigen is straightforward and simple. The company intends to offer its initial service to customers at a price of around $39.99 per month, plus it has plans for ad-on features for an expected price of around $14.99 per month. Though not stated, another opportunity for Wifigen might involve the sale of data to interested third-parties. 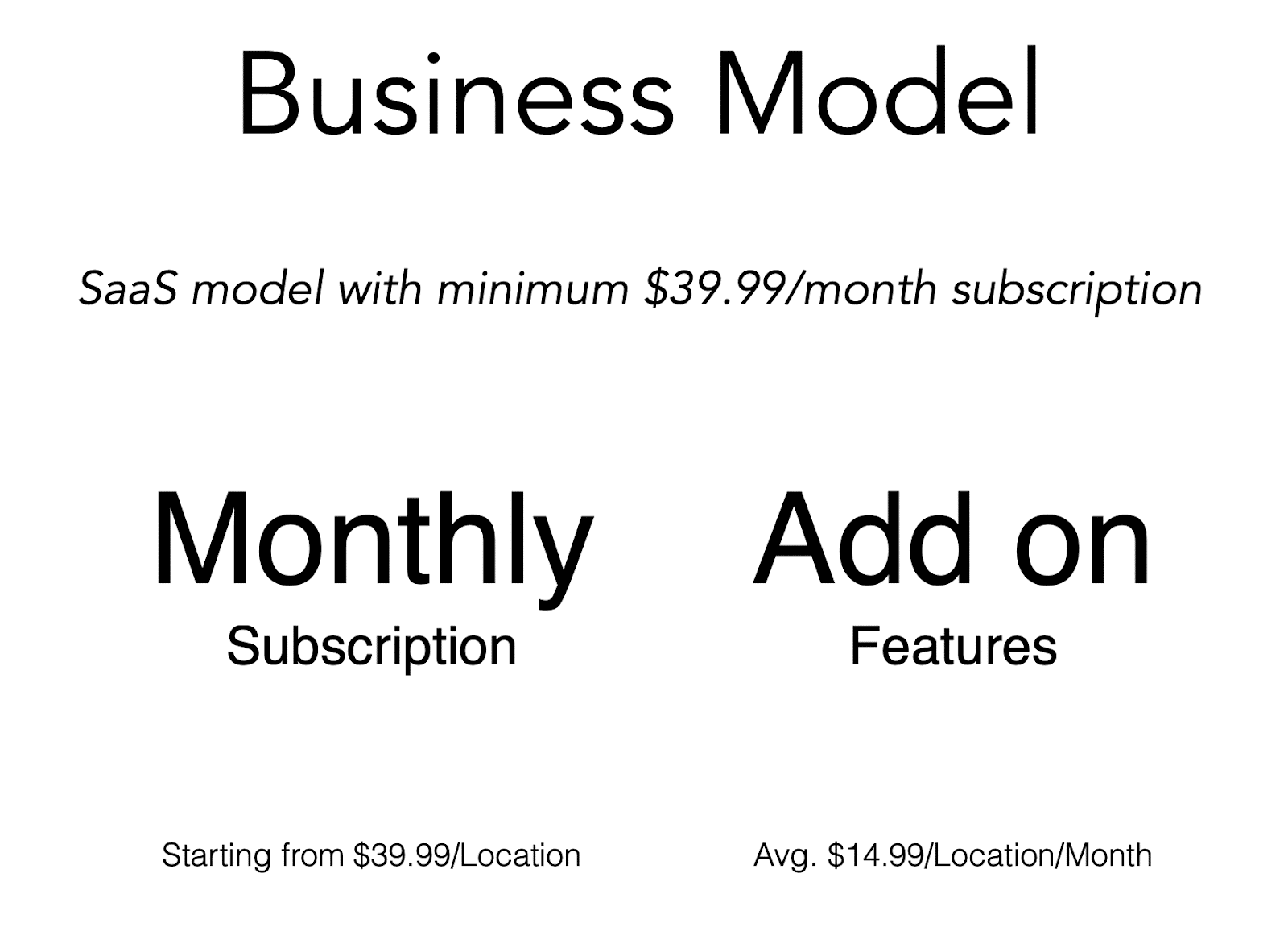 One example management gave of the opportunity it is tackling comes from New York City.  According to the firm, there are about 8,600 coffee shops and over 24,000 eateries. Assuming 100% customer capture in that (admittedly very large) market, the company would be able to generate revenue of $19.56 million per year. In its own pitch deck, it stated that its goal with its current funding is to get it to 500 paid customers, representing annual run-rate revenues of $300,000, in a period of 18 months or less. 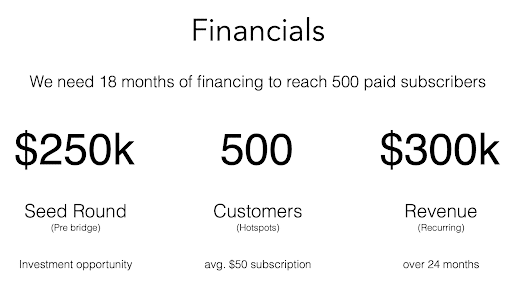 The total addressable market being focused on by Wifigen is significant in size. In short, the vast majority of WiFi hotspots are prospective targets for them. Globally, in 2015, these were estimated to number 64.2 million in all, but with the continued expansion of technology and the modernization of once-underdeveloped parts of the world, the growth rate has been robust.

By 2020, it’s estimated that there will be around 432.5 million WiFi hotspots across the planet.  Even if only 10% of these areas end up being viable targets, that would translate, at $50 per client, to a market size of $25.95 billion per annum. That excludes any additional revenue opportunities identified by management over time.

Another way to look at this opportunities is through the lens of WiFi-enabled devices. In 2017 alone, there were more than 5 billion of these globally and by 2030 it’s estimated this number will exceed 17 billion. Over the next several years, and especially with the rise of 5G and IoT (Internet of Things), this number should only soar.

This is not to say that Wifigen has a clear and easy path forward. Yes, the business model does come down to something as simple as completing the technology and selling it to its prospective clients at a nominal price (compared to the value that it purports to bring), but the firm does also have competition to contend with.

The two most notable competitors at this time appear to be Zenreach and Purple WiFi. The latter of these has operations across 160 countries, has offices in 5 of them (including the US), and caters to over 45,000 venues where they have recorded data from 10 billion visits from more than 110 million unique individuals.

Though Purple WiFi is a major player, Zenreach should not be discounted either. To-date, the company has raised more than $95 million. Specific user data for Zenreach is not available, but the company did make public the fact that, in the one year ending March 31st of 2019, its targeting efforts helped to direct 7.5 million customers back to its clients’ locations within 7 days of seeing a marketing message online.

In all, the management team at Zenreach estimates that this helped to drive additional sales across its network of between $393 million and $739 million, but readers should take any estimates provided like this with a huge grain of salt.

Even with such large competitors, there very well could be room in this market for more.  Wifigen has, through its testing, already recorded data for over 3 million WiFi users, with the total number of connections exceeding 46 million. A big win for the firm came with its testing with Pakistan’s largest free WiFi network, with a total of more than 1 million individual connecting to it every month. Continued traction of this nature will only strengthen the company’s reputation and give it the ability to capture some of the tens of millions, if not hundreds of millions, of prospective clients across the world.

Judging by the looks of its top members, the management team at Wifigen is split between those with experience and those lacking it. The most notable members appear to be CEO Bilal Athar, who was given the label of a top 30 under 30 by Forbes, and John Patrick, the company’s Executive Chairman. Mr. Patrick used to be the former VP of Internet Technology at IBM and he was also the Chairman of the Global Internet Project for a period of time.  In the table below, you can see more details covering the top brass at Wifigen.

At its core, the transaction involving Wifigen is a little more complex than a lot of others out there. The company is seeking an investment ranging between $50,000 and $250,000, with the maximum amount giving them the fuel to operate for 18 months as it continues work on its technology and (hopefully) locks down the 500 customers it is projecting it can strike deals with.  The lowest investment that can be made by any one individual is $250 and as of this writing it has $21,500 committed.

The structure of the transaction will not be as stock but will be, instead, a SAFE note that will convert at a valuation that is a 20% discount compared to whatever valuation the company receives upon its next round of financing.

Wifigen is a Deal To Watch. Wifigen’s business model and traction so far are incredibly interesting and encouraging. Because of this, if the firm were a first-mover in the space, it would be ranked a Top Deal, but this is not the case.

The company plays in a massive market with significant growth potential over the next several years most likely, but it is faced with competition from at least two major firms that are years ahead of it operationally. This does not mean that Wifigen is a bad prospect. In fact, the nature of its business model, the simple application of its technology to help clients effectively monetize what has historically been a nominal cost center, and the low price point at which it claims it can achieve this, all qualify it as a Deal To Watch.

Competition aside, some risks do exist. This biggest of these will be usability and reliability.  Purple WiFi boasts 99.9% uptime for its network and while management claims that its advantages over its peers includes being non-tech savvy friendly and providing users with an easy installation process, a lot of these claims are subjective in nature and may not actually be accurate to a majority of users.

Another risk is execution. The company has done plenty of testing, but in order to avoid diluting shareholders more moving forward, especially with a possibly painful down-round, it must go on to capture a meaningful number of customers. An inability to close deals would prove negative for shareholders and management alike.

Even with these risks at play, Wifigen is worth watching. If management can avoid these pitfalls and successfully navigate to the path of self-sustainability as a result of this round, the end result will be an offering that has the ability to create real value for clients and shareholders alike.