Next Door Photos on Wefunder - KingsCrowd Skip to content

Next Door Photos, with a pre-money valuation of $10 million, is raising funds on WeFunder. It is a real estate photography company that captures real estate listings and delivers all media to brokers and realtors. The enterprise model makes the process of publishing listings faster, more convenient, and more cost-efficient. Next Door Photos was founded by Paul VanderKuyl and Taylor Blom in 2015 and has raised over $1.9 million since its founding. The current crowdfunding round has a minimum target of $100,000 and a maximum target of $500,000, and the funds will be used towards marketing, new product development, growth team addition, and working capital. Next Door Photos has proven traction, with revenues of $2.06 million in 2019, doubling year-over-year for the past four consecutive years. The platform is highly scalable, with Next Door Photos executing over 27,000 photoshoots in 2019 and editing an average of 72,000 photos per month.

The Next Door Photos team has been selected as a “Top Deal” by KingsCrowd. This distinction is reserved for deals selected into the top 10% of our due diligence funnel. If you have questions regarding our deal diligence and selection methodology please reach out to hello@kingscrowd.com.

The real estate market is not generally thought of as fertile ground for startups. After all, with the rise of Zillow and Trulia, of Opendoor, of sharing services like Airbnb, and more, it seems like all of the good opportunities in the space have already been taken. At least one market that has not been touched on too much in recent years, though, has been the service side of professional real estate photography. Each year, more homeowners recruit professional photographers to take photos of their properties. These services often include other media like videos and 3D image rendering. These investments are well worth it too since professional photographs and videos leads to quicker sell times in the commercial real estate market. They also contribute to higher sale prices. Unlike many aspects of the real estate market today, though, the turnaround time is not near-instant. It is, generally speaking, 5 to 7 days. For homeowners and realtors who want to move fast, this holdup can be cumbersome. Though this may not seem like a long time to wait, consider the quick turnaround times for other aspects of the market, such as Rocket Mortgage for mortgages and Opendoor for instant offers for your property. Zillow provides quick home searches and broker connections, as does Trulia. There is no widespread comparable for quick turnaround times for professionally taken photos. Until now.

The mission of Next Door Photos is simple: to provide a fast turnaround time between the moment you submit a request for a local professional to photograph your property and the moment you have the media you wanted available to use. The company does this by running what is essentially a marketplace that connects homeowners or agents to the photographers in question. Customers submit a request, with listings taking just one minute to complete. They can receive a single appointment for all the media they want to be prepared for them. Within a day, a local partner of Next Door Photos will have arrived, taken the images requested, edited them, and returned them to their client.

Next Door Photos relies on owner-operators as its network. Its side of the deal is to provide the platform through which they are connected to homeowners and agents. They also provide enterprise-quality solutions for these photographers, including a network of more than 300 editing teammates spread across 3 firms in 3 different countries. Using this established network, Next Door Photos has been successful in growing their enterprise. In 2019, the company boasted that its network of photographers conducted work for more than 27,000 listings and resulted in 72,000 photos edited each month. Furthermore, the firm saw over 5,000 repeat clients. The average owner-operator pays Next Door Photos a fee of $167 off of a normal bill of $400. Not all of the arrangements the company has are small though. Since launching, the firm has attracted large customers as well. These customers include Zillow and Opendoor, the latter of which resulted in more than $250,000 in revenue for the company last year.

As of late last year, management boasted a network of more than 175 photographers across 42 locations. Their goal is to increase this network to 80 locations this year, opening the door to $9.7 million in annualized revenue. By 2023, management hopes to have scaled up to more than 200 locations, with annual revenue of $67.1 million.

Official financial results have not been provided by the business yet for 2019. However, they did say on their filing page that revenue for last year was $2.06 million. This is where some confusion comes into play, though. Revenue of $2.06 million would represent strong growth year-over-year. This is likely the correct figure, but the company did report a different figure in its investor presentation. According to that source its sales were $4.75 million for the year. The company claimed that this larger number brought total revenue for the firm since inception to $8.65 million. Before investing, investors should press the firm on which sales figure is accurate. After all, that is a significant spread.

The market that Next Door Photos plays in, real estate, is one of the largest in the US and across the globe. The niche space that it’s in, however, is considerably smaller. Actual financial estimates for the market have been difficult to find, so a better way to look at the market is through a different lens. As the image below illustrates, as of February of 2020, the average number of homes sold over the preceding 12 months totaled a bit over 5.5 million. The average cost for professional photos for real estate is about $400. These statistics all imply a maximum market size for the business of $2.20 billion. Now, management claims to take a smaller piece of that pie. Their average take is about $167, which translates to an addressable market for the business of about $918.5 million. That figure assumes that every seller was to use professional real estate photographers. It does not include foreign markets like the EU, China, or elsewhere. 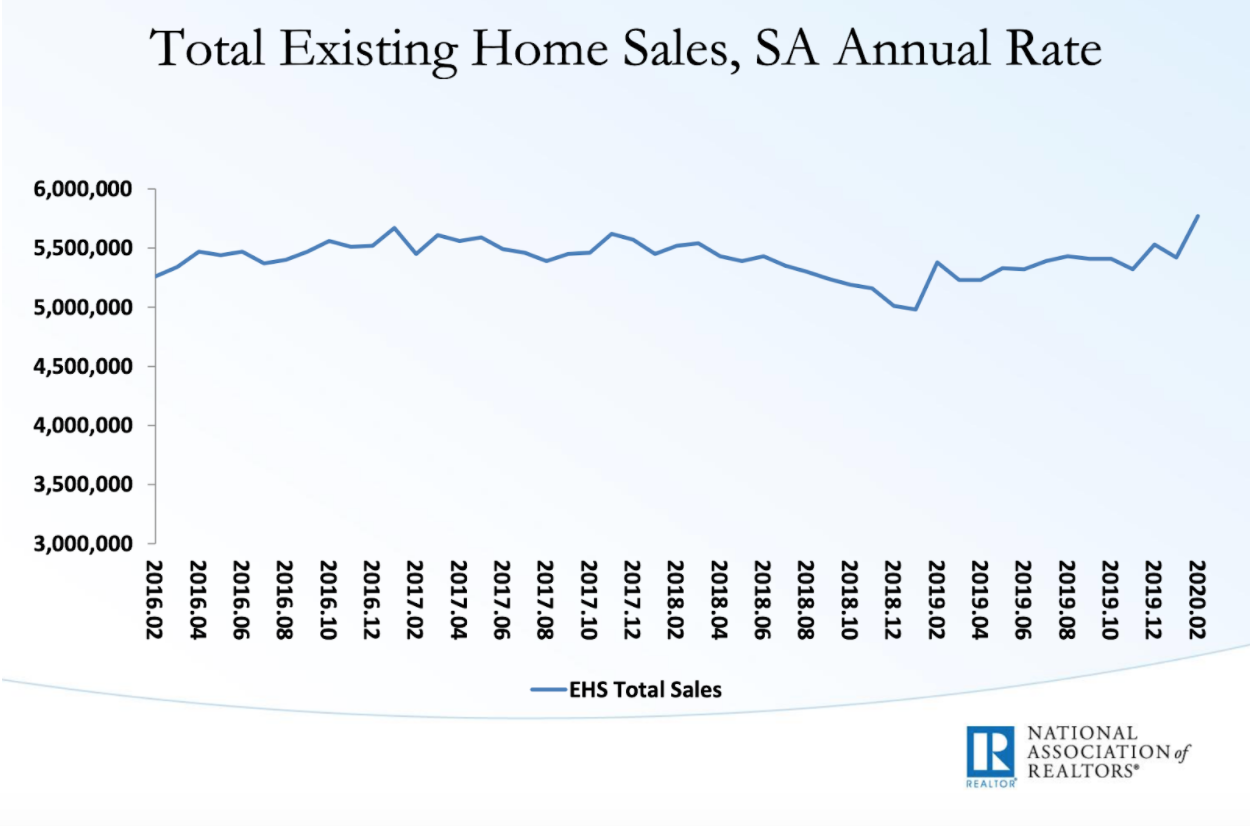 Naturally, full market saturation isn’t going to happen. It rarely does. Having said that, there are reasons why it should move in that direction. According to one source, 61.3% of realtors found that having photographs are crucial in getting a property sold. In fact, homes that do have photos sell, on average, 32% faster than homes that don’t. The number of photos also matters. A property with just 1 photo will spend an average of 70 days on the market. Compare that duration to 32 days for 20 photos. Not only do these properties sell faster, they tend to sell for more. According to one estimate, homes between the $200,000 and $1 million price range sold for between $3,000 and $11,000 more when they had photos versus when they didn’t. This difference makes the average $400 investment a bargain.

Though this all may seem nonsensical, it’s actually quite logical. More photos relay more information. A big part of buying a house is visual, and when there are attractive photos available for prospective buyers, you’re likely to draw in more people to look at it. More data seems to support this stance. According to the National Association of Realtors, 87% of homebuyers found photos to be among the most useful features on realtor websites. However, it’s not just the photos that matter. Other types of media that professional photographers can and do provide through Next Door Photos also matter. Video content, for instance, supposedly makes it 73% more likely for potential buyers to visit a home they found on a realtor site. Even so, that same source found that only 10% of realtors effectively used video to market their property.

This last piece is particularly interesting because it’s part of a common problem in the industry. An estimated 45% of brokers have found that they have a difficult time keeping up with technological changes in this space in spite of the fact that realtors making $100,000 or more in gross commissions per year are twice as likely to use advanced technology tools. At the end of the day, what all of this points to is that Next Door Photos offers a valuable, value-add service. It is beneficial not only for homeowners looking to sell their properties, but for realtors in the space as well.

In order to keep growing the enterprise, Next Door Photos is looking to raise some additional capital. In all, the firm hopes to close a round for up to $500,000, but it will accept as little as $100,000. As of this writing, it has received commitments totaling $325,464, with individual commitments required to be at least $500. In exchange for this cash, the company is issuing common shares in itself at a pre-money valuation of $10 million. For the first $400,000 committed, though, the firm is lowering this to $8 million. Both of these levels appear toward the higher end of where the firm likely belongs if its revenue is $2.06 million, but they are far from unreasonable. If management made an error and the actual revenue stands at $4.75 million for last year, then this changes things. Instead of being a lofty price, the valuation on the firm will look like a really attractive opportunity, especially true when taking into consideration the firm’s strong growth rate.

There are currently two core members running the Next Door Photos team. The first of these is its co-founder and CEO, Paul Vander Kuyl. Prior to his time founding the firm, he worked as an Executive Director at iCademy Global. Before that, he was a General Manager of Product Development at Innotec. He has also worked as an Engineer and Program Manager at Johnson Controls. The other main figure at the firm is its other co-founder, Taylor Blom. Blom currently works as the CRO (Chief Revenue Officer) of the business. Previously, he worked as a Director of Audience Development at Group Tour Media, and his prior experience was as a Marketing Director at Lakeshore Lodging.

After a deep dive into the opportunity presented by Next Door Photos, our team has decided to rate the company a “Top Deal”. The firm has a history of strong growth, irrespective of which revenue figure provided by management is accurate for its 2019 fiscal year. Though the market is small for the entity, it is attractive and there is a lot of data to support that what it offers is valuable for all parties involved. Win-win business strategies are the best to pursue.

This is not to say that everything is great for the firm or its shareholders. While 2019 figures are still not fully known, 2018 figures show significant net losses. This metric is something management needs to work on, but in itself it’s not terribly worrisome. After all, net losses early on are typical for startups, especially true for rapidly-growing ones. The valuation, if its revenue is the lower of the two figures provided by management, is a little high too, but not wholly unreasonable. In all, though, we rate the good as materially outweighing the bad here.

The rapid pace of technical innovation over the last decade has made marketing more complex than ever before.…

One of the biggest shifts brought on by the COVID-19 pandemic is the rise in remote work. Before…

Personalization is becoming more of a necessity than a luxury in the world of e-commerce. Companies are slowly…

Want to learn more about Next Door Photos?