Last week we started the Sector Spotlight series with a focus on the Technology sector. Today we turn to offerings in the Food & Drink sector. Keep in mind that 2020 statistics will be skewed as a result of having only 4 months of data for the year so far.

As always, a good place to start is looking at the number of offerings to get an idea of the investment potential and a measure of success. We saw Food & Drink offerings stay constant from 2018 to 2019, but they appear on pace to exceed that total in 2020. This potential increase in 2020 looks like it may be due to increases in offerings on some more niche platforms, which we will see more of below. 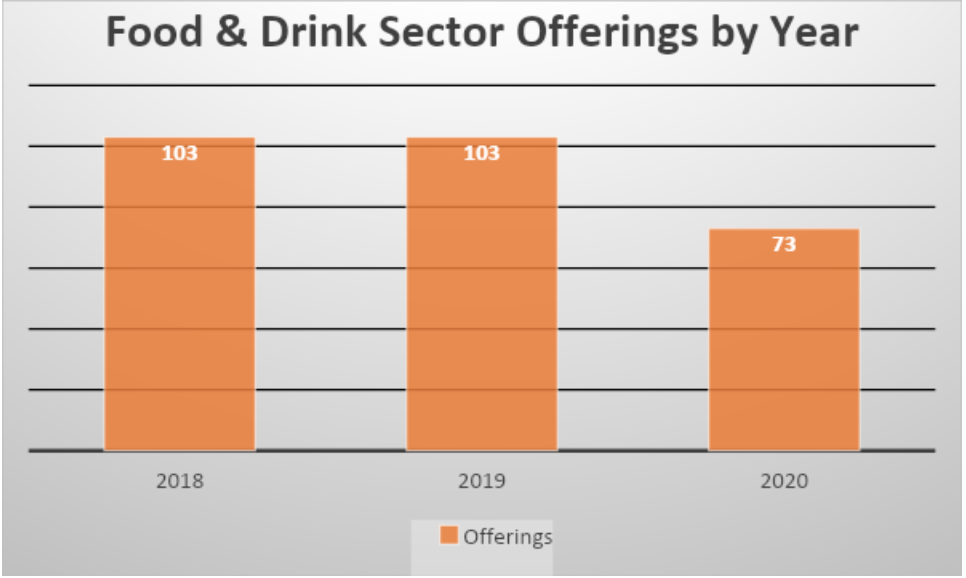 It appears that the average round minimum has been decreasing over the past three years, with the round minimums in 2020 at their lowest average yet. This trend appears to be in line with overall market trends, with most companies asking for less to ensure hitting their target. 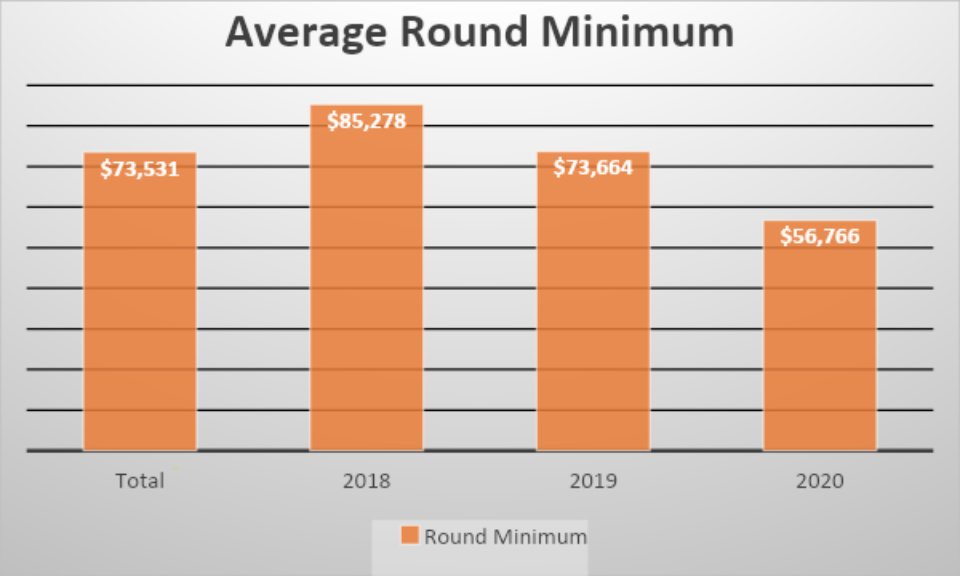 The success rate for offerings in 2020 is well below the overall average for the prior two years. As with last week, a large driver of this is the active status of a number of the 2020 offerings. Of the 59 live offerings our data covers that launched in 2020, 52 of those offerings are still active and raising. Based on the prior years’ trends, I would expect to see the number of successes tick up as the year progresses. 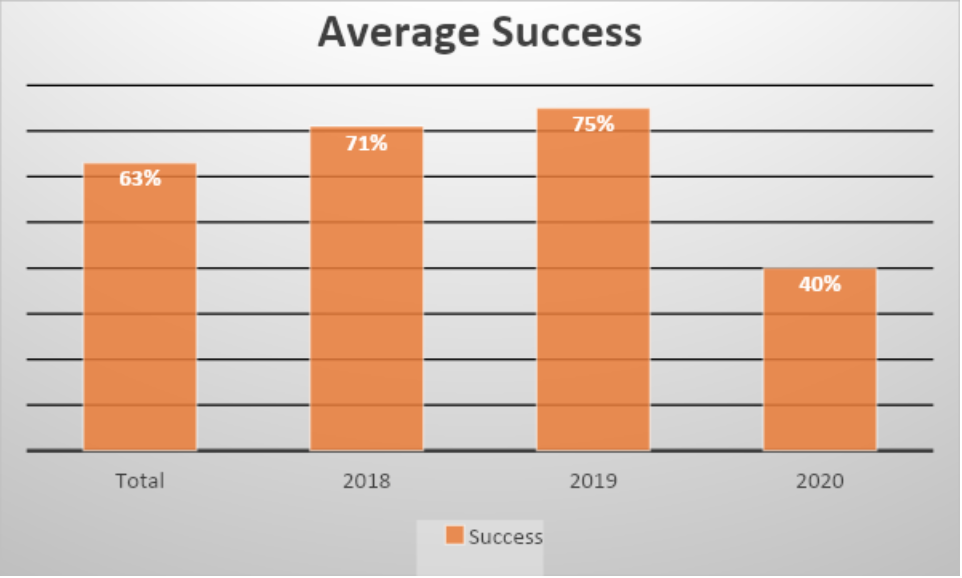 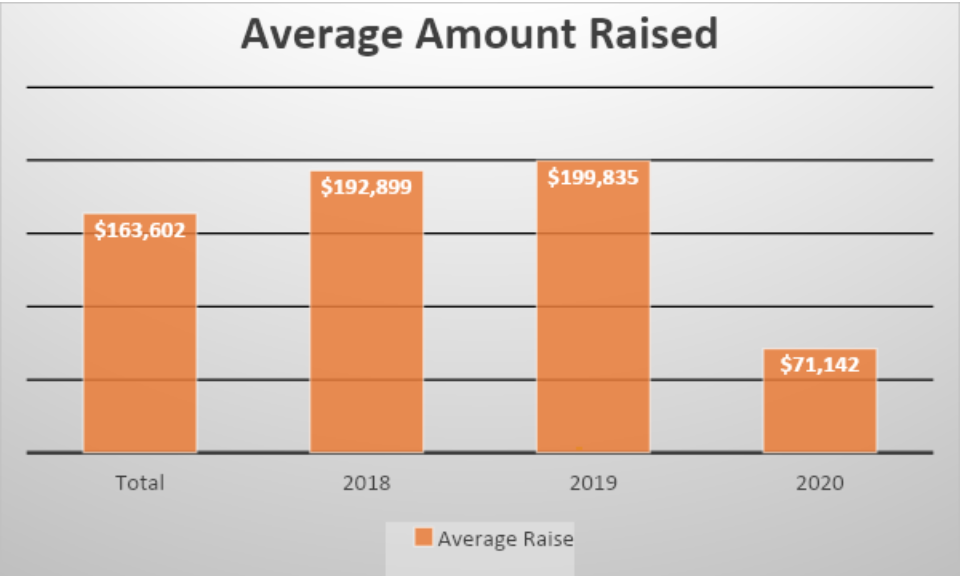 I’m going to sound like a broken record here, but the current “decrease” in average investors again appears to be driven by the active nature of a large amount of these offerings. Of the 2020 offerings, 25 have been live for less than 2 months. The increase over the prior two years, as we have seen with the other offering statistics, would suggest this number will increase as the year progresses and more of these offerings close. On average, these open offerings have over a month until they close. The 25 offerings that have been live for only 2 months have an additional ten days, on average, until they close. 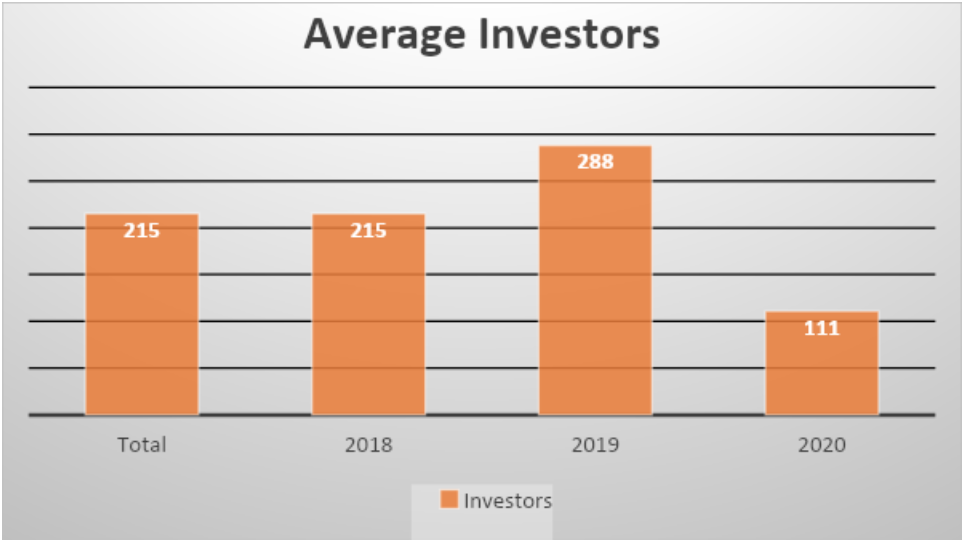 Next let’s look at which platforms Food and Drink offerings have positioned themselves on, both in total and by year. 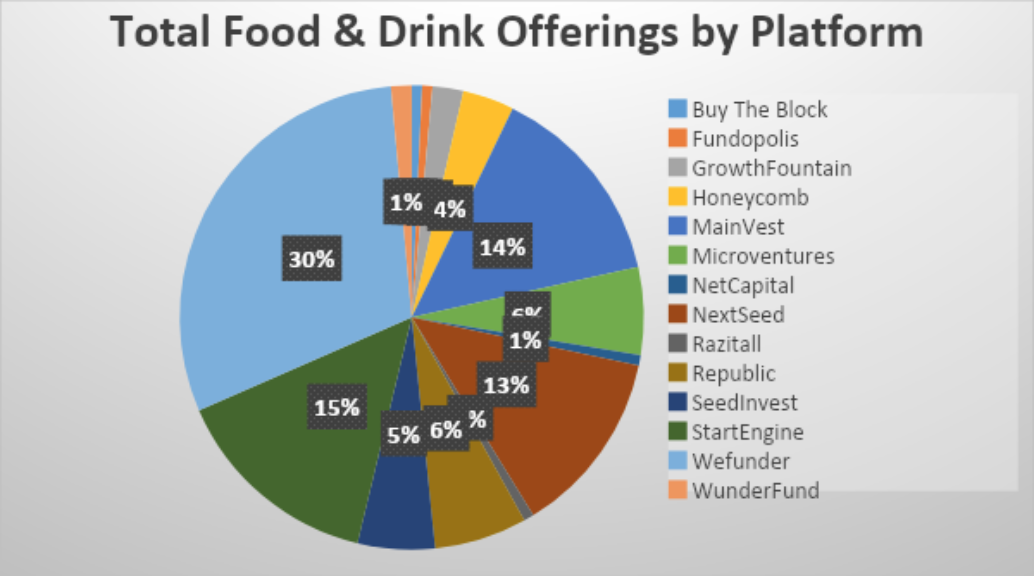 Wefunder is the leading platform over the past 3 years, but as we will see below, newer platforms have been slowly chipping away at its market share. 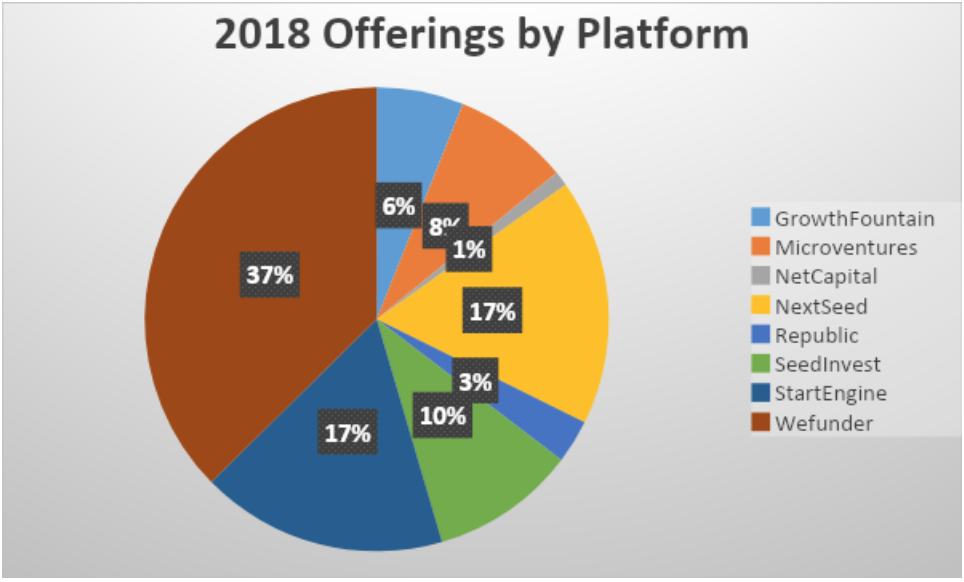 Wefunder’s most dominant year in terms of market share was 2018, with its nearest competition (NextSeed and StartEngine) not even approaching half of its share of the market. 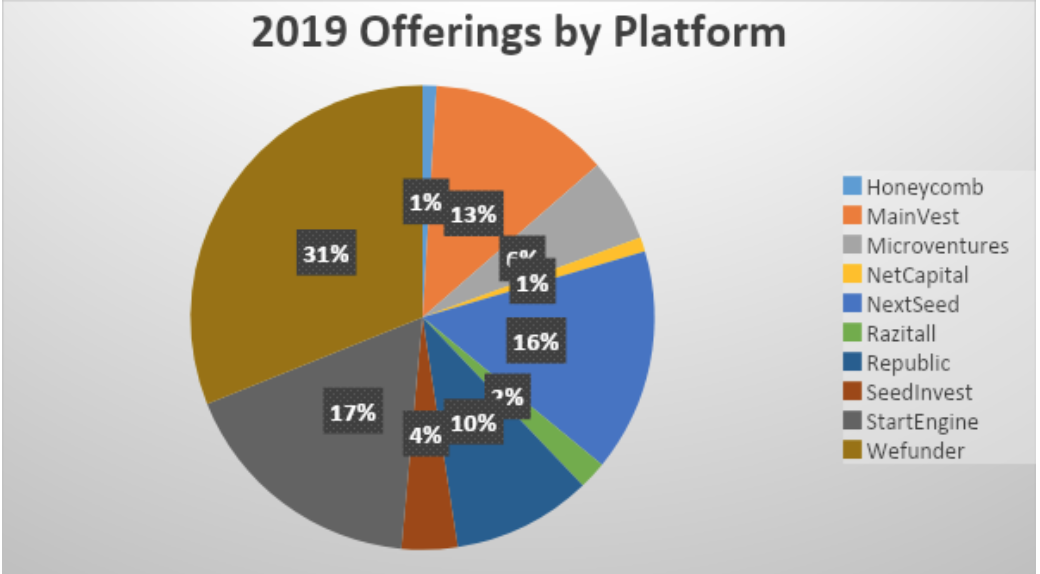 Wefunder’s market share declined slightly in 2019, due to the introduction of MainVest into our sample, picking up 13% of the market. 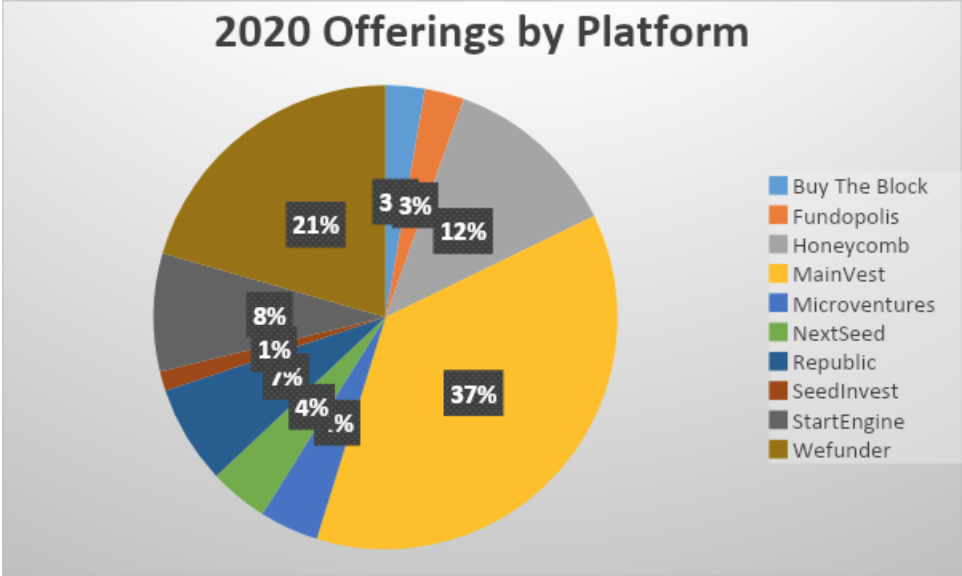 Thus far, 2020 has seen MainVest take over the top spot in terms of Food & Drink offerings, with nearly twice as much of the market share of Wefunder. It would appear as though firms are coalescing around certain platforms within this sector. As new platforms pop up, and certain sectors begin to move away from the “primary” platforms, websites such as KingsCrowd provide a valuable resource in rating and aggregating offering opportunities.

Finally, some statistics on the financial data for some of the companies raising capital through Reg CF. This information is obtained directly from a company’s SEC Form C filing. Information is not yet available for 2020.

As may be expected, a lot of companies raising money through Reg CF are still in their early stages, and have not yet turned a profit. Unlike with Tech firms last week, where the average losses were decreasing, 2019 saw an increase in net losses for Food and Drink firms raising capital through Reg CF. A potential explanation is that turnover in the sector is high, with new firms entering the market regularly. With the trend in CBD last year, a number of new firms popped up that were in need of funding. 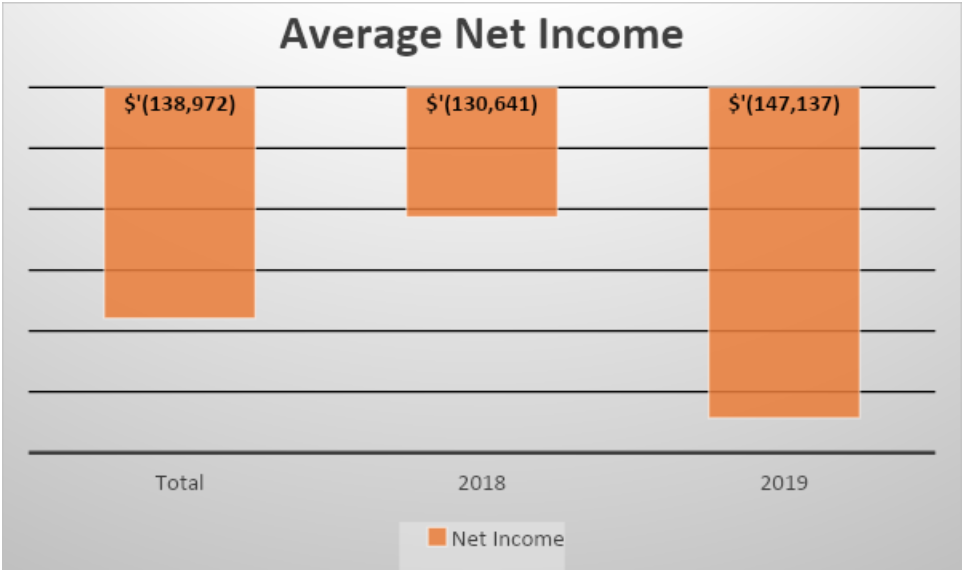 Seemingly at odds with the increase in net losses in 2019, firms raising funds under Reg CF saw an increase in revenues at the same time they were losing more money. This potentially squares with the losses discussed above if these new firms saw high revenues due to the nature of their business or niche (think CBD and spiked seltzer – two big trends in 2019) but also faced large startup costs in the early going. 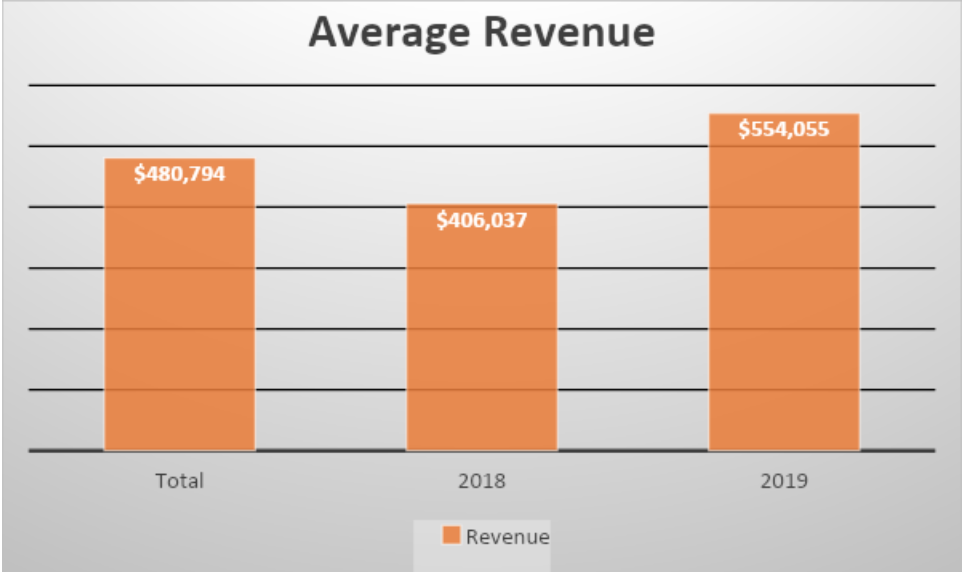 Some Food & Drink firms KingsCrowd is looking at:

Copperworks Distilling – A Deal to Watch

Pure Green – A Deal to Watch

Asarasi – A Deal to Watch Why run a Regulation Crowdfunding campaign?

This guest post written by Jonny Price, Director of Business… ...