As of August 9th, Blue World Voyages has raised $110.1Kof the current round

The Blue World Voyages team has been selected as a “Top Deal” by KingsCrowd. This distinction is reserved for deals selected into the top 10% of our deal diligence funnel. If you have questions regarding our deal diligence and selection methodology please reach out to hello@kingscrowd.com

In 2017, the global cruise line industry raked in over $45 billion in total sales, and in North America alone, cruises attracted 12.41 million customers in 2016.

In order to expand its offerings and attract ever more patrons a new concept is needed. A way to bring millions more who had previously never considered booking a cruise. Enter Blue World Voyages, the first cruise line devoted exclusively to sports and fitness.

The timing also couldn’t be better with millennials enter their peak earnings years. A recent study by the Harris Group found that a whopping 72% of millennials prefer to spend money on experiences over things.

In a parallel study by Harris, it was discovered that the share of consumer spending on live experiences and events relative to total U.S. consumer spending has risen 70% since 1987. This will have big ramifications as millennials begin to replace baby-boomers as the biggest consumer demographic.

Gaze out into the harbors of Miami or Seattle and odds are good you’ll see a giant cruise liner slowly heading off into the horizon. These ships are floating cities capable of not only hosting hundreds of guests but entertaining them 24/7 with gambling, shows, entertainment, pools and water slides.

They also don’t promote a healthy balanced lifestyle with their bottomless buffets and sedentary entertainment options. Broadly, society is moving away from this sort of thing and more towards farm-to-table foods, daily exercise, and immersive experiences.

The cruise line industry will have to change if it wants to take advantage of this shift. To expand into a new market – the estimated 41 million people ages 35-65 that live ‘healthy’lifestyles – Blue World Voyages is removing these amenities and replacing them with local farm-to-table foods, active shore excursions, kayaks, health-focused spa amenities and full gyms.

It is estimated that the global cruise line industry will amount to an estimated $45.6 billion in 2018 up from just $23 billion in 2007. Should Blue World Voyages be able to grab a piece of this enormous floating pie it would be an enormous boon. Its target market (41 million health-conscious patrons) is over 3x larger than the current cruise line industry’s annual guest count.

The company will also be offering a premium option in a profitable industry with Carnival Cruise Lines reporting net profits last year of over $2.8 billion on a profit margin of 15.5%. 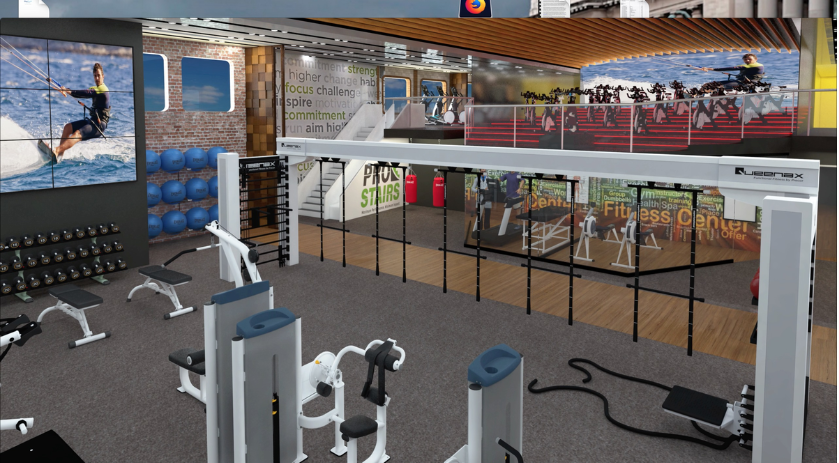 The obvious competitors that may enter Blue World’s domains are the major cruise lines. The sheer size of these enterprises speaks to the enormous opportunity that Blue World Voyages has in front of it.

Blue World Voyages represents the first health-focused cruise in the world. Though there are some premium cruises lines such as River Viking Cruises, there is no ship focused on catering to the active, healthy lifestyles individual.

Success for Blue World Voyages will require capturing a meaningful portion of its target market  — individuals who are not known to willingly stay “cooped up” in a confined space such as a ship. Which is exactly why we think Blue World Voyages is such an intriguing investment.

The way the cruise industry works is by making the ship the destination — you never have to leave. But by picking port destinations that will attract its target clientele Blue World may have found a way to differentiate from on-land destinations. Being able to travel the seas, while enjoying the best cycling, water sports, golf, yoga, and hiking destinations could become an attractive new avenue for premium experiential vacations?

Each cruise ship will have a capacity of approximately 350 guests. With an average ticket revenue per passenger of $3,500 (which is more than reasonable when compared to an extended stay at a high-end spa or recreation facility which can easily reach $5,500 per week) Blue World Voyages estimates annual revenues of ~$50 million per vessel.

At a premium price point for cruises, management aims to produce gross profit margins of ~$38% with estimated operating costs for 50 annual voyages per vessel coming in at around $30 million.

We think this may be a little rosy but do think that gross margins can come in at 20-25% – superior to Carnival’s 15% gross margin mentioned earlier because of the premium price point and slightly smaller vessel with reduced operating cost.

Customers (the acquisition costs of which are not included above) will be pursued through targeted advertising and media campaigns that have proven to work in the past. The company has already enlisted the help of a select set of industry-leading media, manufacturing and service providers all geared towards active-lifestyle products and experiences.

As we mentioned above we estimate gross profit margins to be in the range of 20-25% — perfectly fair for a premium product or service, if management can hit their 80% capacity utilization target. It’s worth noting that last year the cruise line industry experienced occupancy rates in excess of 100% thanks to overbooking, which strengthens our confidence that this team can yield their 80% target or better.

We are impressed with management’s ability to reduce time and upfront fixed cost by refurbishing and retrofitting slightly used ship. This will minimize time to go-to-market from 3 years down to 6 to 9 months.

To be clear, this is a very different type of investment to a traditional tech startup. Thus the capital needed to get up and running as well as the valuation look very different. Though the company is pre-revenue, the current valuation is $60 million.

This makes sense — the company isn’t reinventing the wheel and significant capital is going to property, plant & equipment all of which are marketable with known values. The reality is, the ship alone once completed will be worth ~$60M.

Its valuation is also attractive based upon internal return projections. Assuming expansion to three ships within five years and an eventual acquisition, IPO, or some other form of exit, management projects a 52% annualized return: 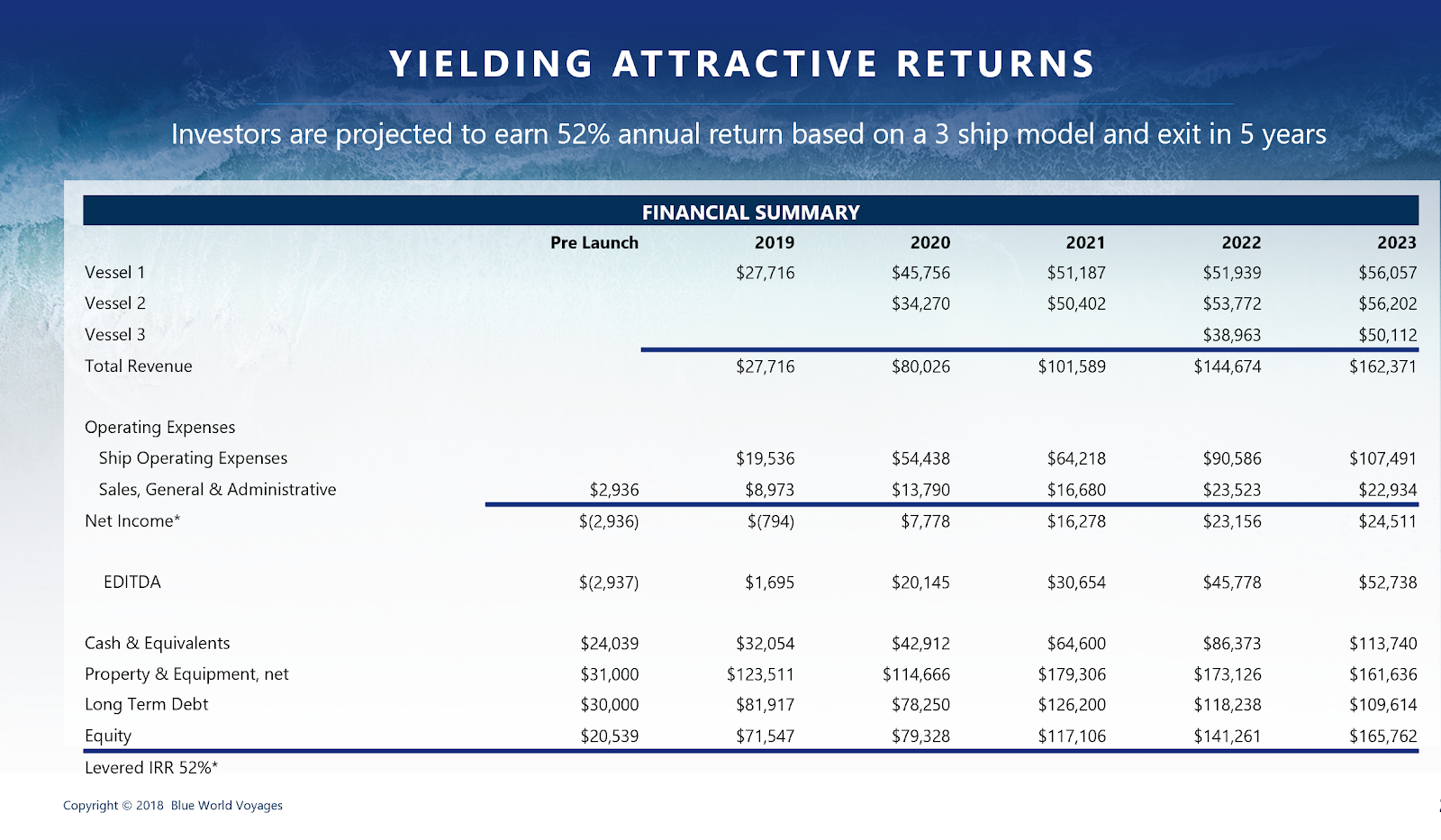 To finance its first ship the team is employing a practice used by many of the major high-end hotelier brands such as the Ritz, which sell several apartments on board in order to cover the cost of getting up and running. This should prevent dilutive capital being raised in the future as it will largely be financed by the sales of the apartments.

To break it down, Blue World plans to sell 26 “Owners Club” Suites per ship. A one-bedroom suite will go for approximately $2.2 million and a two-bedroom for $3.2 million. The total proceeds will raise over half (~$50.7 million) of the funds needed for each ship buildout. 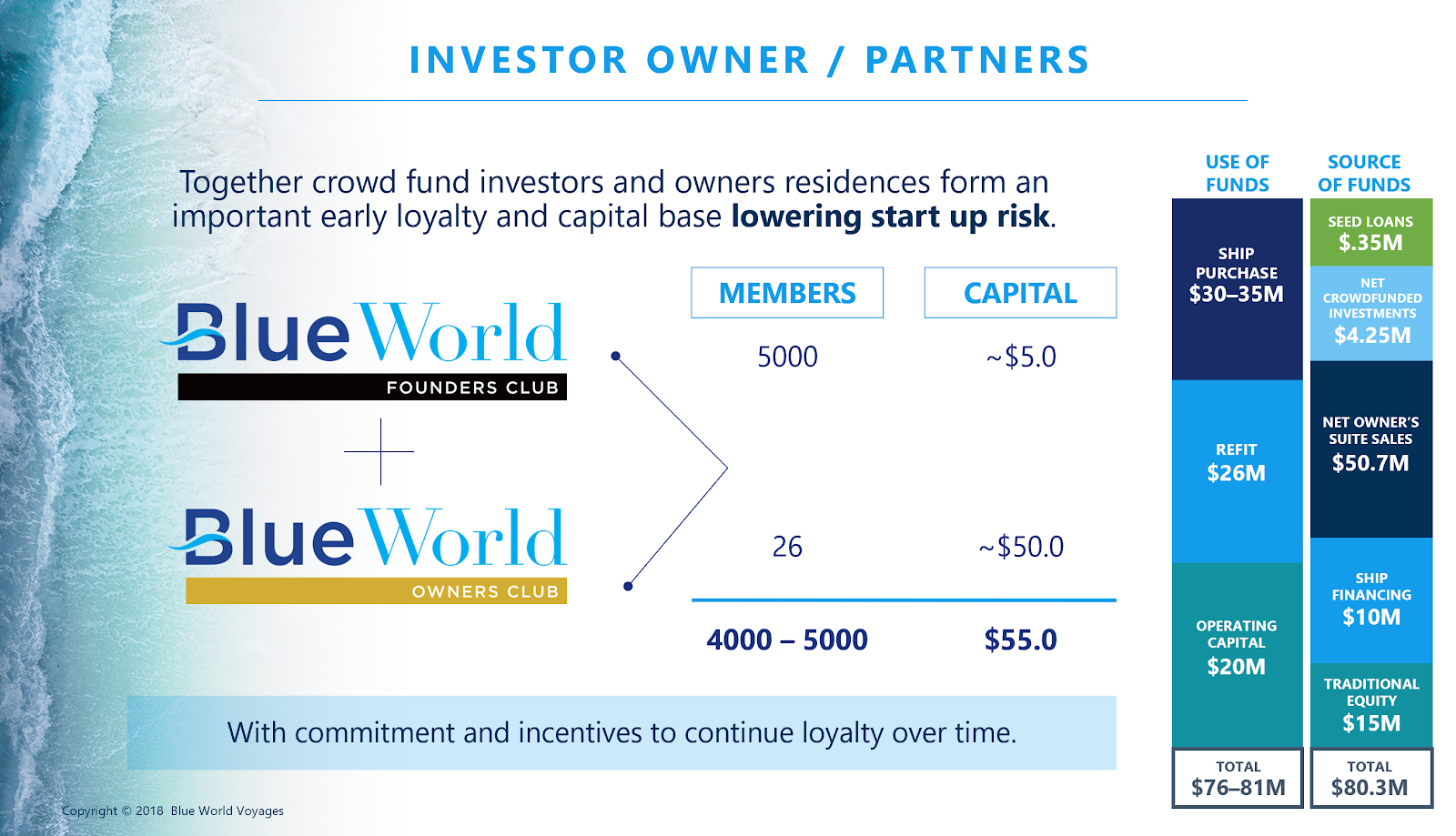 The purpose of the company’s current crowdfunding campaign is to attract 5,000 investors/early adopters to the Blue World concept. This, combined with passengers brought in through sponsor companies like Outside Magazine, Yoga Journal, and a network of travel agents will assist in driving an estimated 70% capacity utilization.

So far the company has raised $500,000 in seed capital and $165,000 through its WeFunder crowd campaign to date. The company already has a sale agreement for the first vessel. Ironically enough it has been managed by one of the company’s earliest investors for the past several years so the company “knows” the ship and all parties want to ensure the success of Blue World.

Now the company needs to raise the necessary funds to complete the acquisition and retrofit it for a scheduled 2019 maiden voyage.

Carnival Cruises sports a market capitalization of $42 billion and an eventual acquisition by one of the majors is not out of the question. For now, the company is focused on acquiring ships and raising the funds necessary to build a fleet — to help drive to a fair value of $400 million within 5 years. An acquisition by one of the majors like Carnival or Viking River Cruises is not difficult to imagine and is on managements radar. An exit is very much the focus.

Here at KingsCrowd, we think one of the best things about Blue World Voyages isn’t its business concept or market potential but its management. Co-founder and CEO John Richards is the former President of Starbucks and was instrumental in the global expansions of both Elizabeth Arden Spas and The Four Seasons. If anyone can build a premium, activity-focused cruise line its Mr. Richards and his team.

Also “on board” Blue World is Gene Mehan, Blue World’s Chairman, and Co-founder has over 30 years of active-lifestyle hospitality experience under this belt and has managed projects of up to $50 million. As icing on the cake, Fredy Dellis, formerly the CEO of The World at ResidenSea and President of Burger King International, is also involved in the project as a Co-founder and advisor.

Blue World Voyage hits on the millennial trend of healthy lifestyle and experiential travel. Entering a high demand industry with a unique solution presents an opportunity to invest in what could become the next premium travel household name.

Structured as a SAFE (Simple Agreement for Future Equity), you will be allocated the rights to the equity that will be divvied up once the “big-money” has been raised and a ship procured. The raise values the company at $100 million and, given the amount of money being invested in operations and enormous growth potential we think this valuation is actually reasonable. At 80% capacity and 50 voyages per year, each vessel should produce approximately $18 million in gross profits.

Blue World Voyages has the executive team and know-how to break into the $45 billion cruise line industry with a brand-new yet surprisingly intuitive concept. One that harkens back to what sailing used to mean: in search of unknown shores and adventure. For these reasons, it is rated a TOP DEAL by KingsCrowd, reserved for the top 10% of all deals analyzed across the market.