The Mevo team has been selected as a “Top Deal” by KingsCrowd. This distinction is reserved for deals selected into the top 10% of our due diligence funnel. If you have questions regarding our deal diligence and selection methodology please reach out to hello@kingscrowd.com.

It’s no mystery that the video-streaming industry is on the rise. A recent report from streaming intelligence company Conviva revealed consumers around the globe spent an average of 58% more time streaming media last year as compared to 2018. Furthermore, research firm Sandvine estimates that streaming video accounted for more than 60% of the world’s total downstream internet traffic in 2019.

But within that enormous market, one particular subsegment is gaining steam faster than any other: Live-streaming video.

According to Cisco’s VNI Global IP Traffic Forecast, live video will have skyrocketed 15-fold between 2017 and 2022 to single handedly reach 17% of the world’s internet video traffic. 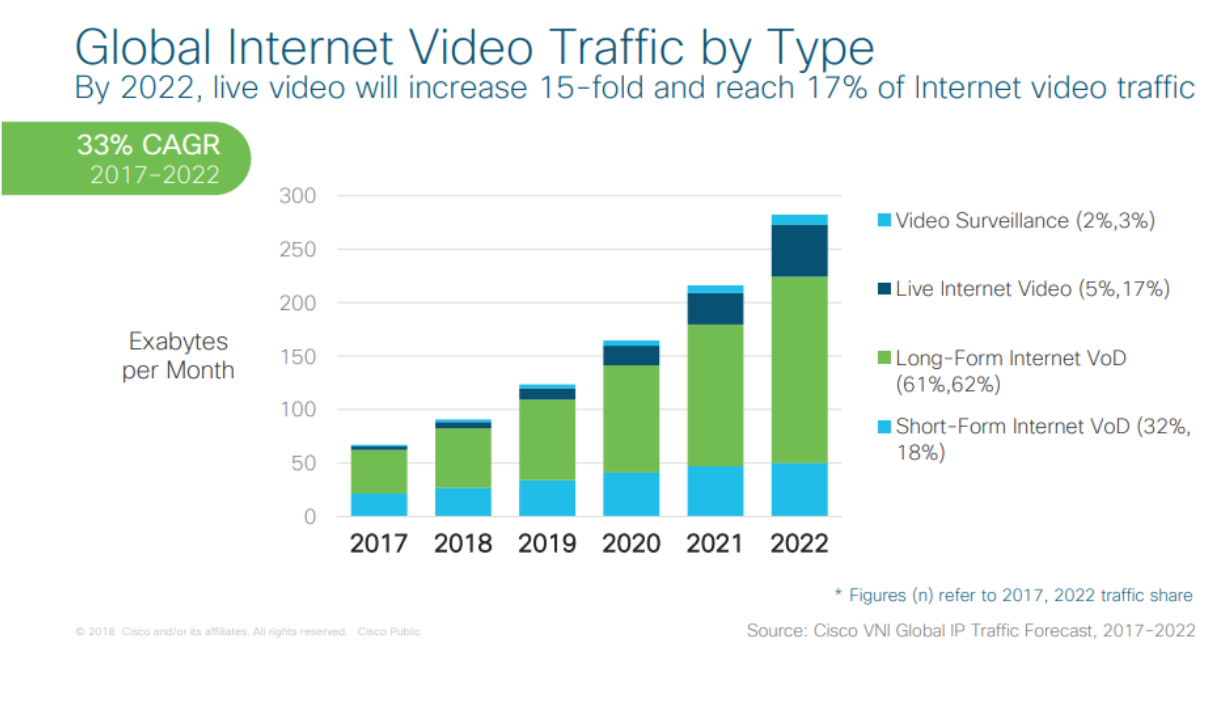 But while there’s no shortage of devices that already offer rudimentary live-streaming capabilities — from smartphones to action cameras and professional camera rigs — none were specifically built for the purpose of live streaming.

The drastically increased demand for live-streaming video has only highlighted the shortcomings of those solutions. Professional rigs are prohibitively expensive and difficult for many people to use. Smartphones — however ubiquitous — are also costly, and suffer from mediocre lens quality, subpar battery life, and a less-than-ideal form factor for streaming purposes. Lastly, most action cameras (like GoPro) offer live-streaming video features as more of an afterthought relative to their primary action-centric purpose.

Enter Mevo, a simple, all-in-one camera solution built from the ground up with live-streaming video in mind.

Mevo’s second-generation camera, the Mevo Start, is currently on preorder and will begin shipping later in May 2020. The Mevo Start can livestream and record for up to 6 hours on a single battery charge, features a world-class 1080p camera sensor built by Sony, a system-on-a-chip (SoC) made by video-chip tech leader Ambarella, and can seamlessly, simultaneously stream to all major live-streaming platforms — notably including Facebook Live, Youtube, Twitch, Vimeo, Periscope Twitter, LinkedIn, Livestream.com and NDI | HX.

The Mevo start can also connect and stream video via Wi-Fi (802.11ac), ethernet, or through a mobile LTE connection. It features 3 built-in MEMs microphones with spatial audio processing capabilities and has built-in threading for tripod stands.

The company also provides its companion Mevo app, ambitiously describing it as a “TV studio in your pocket” that gives users the abilities to easily zoom, pan, cut and fine-tune their video settings (color, brightness, saturation and like) in real time.

The Mevo app runs on a “freemium” model through which users can unlock additional features for a nominal fee of $15 per month, allowing subscribers to create up to nine distinct camera angles from a single camera’s shot, and to overlay graphics, countdowns, and titles to their streams. What’s more — to fulfill one oft-requested feature by existing users of Mevo’s first-gen camera (more on that below) — by the end of this year the Mevo App will add the ability to control multiple cameras on a single device screen.

Perhaps most exciting, Mevo Start will come with a suggested retail price of only $299, effectively giving consumers all the features of a professional camera rig in a compact device at an attractive price point. Later this year, Mevo will also launch a “Multicam Pack” that includes three Mevo Start cameras for $749.

We’ve already noted the Mevo Start is Mevo’s second-generation camera. So there’s precedent for Mevo’s impending success thanks to its first-gen camera, the Mevo Plus. The Plus has already sold more than 90,000 units since launching in 2016 (both on mevo.com and at retailers including Best Buy, Amazon.com, B&H, and Adorama), paving the way for $5.9 million in annual revenue for Mevo in calendar 2019.

Those cameras have resulted in more than five million Mevo-made live streams to date, and the company still boasts 30,000 active users who post at least one livestream apiece each month using the legacy Mevo Plus.

Mevo isn’t profitable just yet, however. Between March 11, 2019 (when the company incorporated in Delaware) and December 31, 2019, Mevo generated revenue of $4.428 million. But after accounting for $3.203 million in cost of goods sold, operating expenses of $4.356 million, and modest interest expense related to $1.267 million of outstanding debt, Mevo incurred a net loss of $3.135 million over the roughly 9.5-month period.

However, Mevo also raised $3.275 million in funding through a priced round a little over a year ago, followed by a $125,000 loan (at a 10% interest rate) from Shopify Capital in February 2020. These activities left it with roughly $318,000 in cash and equivalents on the balance sheet at the beginning of March.

What’s more, Mevo says the coronavirus pandemic has bolstered demand for its products by more than 10-fold as businesses, churches, and schools have rapidly pivoted toward live-streaming platforms while social-distancing initiatives and stay-at-home orders remain in effect.

So how can we be reasonably confident Mevo can meet demand and continue to scale toward sustained, profitable growth?

For one, Mevo’s manufacturing partner is Taiwan-based Chicony Electronics, best known for lending its scaling ability and manufacturing expertise to an enviable client base including GoPro, HP, Google, and Lenovo.

To that end, Mevo is dedicating all of the cash up to its minimum raise of $200K (minus the 7.5% intermediary fee to Wefunder) to produce Mevo Start inventory. If Mevo meets the top end of its $1.07M raise target, it will allocate roughly half to inventory and the remaining 42.5% (after the intermediary fee) to marketing, team, and operational expenses.

All told, Mevo believes it can triple its current annual sales in the next two years, reaching profitability based on generally accepted accounting principles (GAAP) by selling 50,000 camera units per year. Over the longer term, Mevo has set a five-year goal of expanding to 500,000 units per year, which coupled with related Mevo App service revenue, could propel its income statement firmly into the black.

Mevo is led by founder and CEO Max Haot, who previously founded Livestream.com and launched Mevo in response to an overwhelming number of requests from customers indicating “hardware was their biggest hurdle to live streaming events.”

For perspective, Livestream was acquired by video site Vimeo in 2017, the year after Mevo was launched as a Livestream subsidiary. But in early 2019 Haot repurchased Mevo from Vimeo, which remains an investor and partner in the startup.

That’s also why you’ll see a number of former Livestream and Vimeo employees among Mevo’s current 34-employee team, including its Heads of Operations and Finance, Hardware, Software Engineering, QA/Customer Experience, Electrical Engineering, and Design — all of whom held comparable positions at one of the two previous companies. Vimeo Chief Operations Officer Courtney Sanchez also serves along with Haot as a director on Mevo’s board.

Between its proven executive team, established operating history, the likelihood of scaling manufacturing for compelling new products, and strong industry tailwinds in spite of (and apparently fueled by) the ongoing coronavirus pandemic, we have determined Mevo is a Top Deal for prospective investors to consider.

That certainly doesn’t guarantee Mevo’s success, as any number of well-funded competitors could stymie its momentum as they recognize the merits of catering to the budding live-streaming video niche. But Mevo’s early industry leadership and first-mover advantage should go a long way toward helping it capture an outsized piece of this lucrative market, and we believe its Top Deal designation is well-deserved.

Steve Symington is a Lead Advisor at 7investing Group, and previously wrote thousands of articles on publicly traded equities, personal finance, and investing while serving as an analyst for multiple real-money portfolio services at The Motley Fool. He holds a degree in Computer Science (with an emphasis in software systems and mathematics) from the University of Montana, and previously worked as a software engineer implementing machine-learning algorithms primarily for military and government clients.