There are two major issues with modern fashion that DSTLD is seeking to solve. The first is waste. Think about what happened in the movie “The Devil Wears Prada.” What was Anne Hathaway’s character always worried about besides making sure her hellish boss, played by Meryl Streep, always had her morning latte? Next season.

The fashion world revolves around the “next thing” hitting the shelves as reliably as the actual seasons themselves. If this seems a little excessive that’s because it is. And the inevitable result of this is waste.

Americans discard an average of 82 pounds of clothing each year. Last seasons “hot items” inevitably wind up attracting moths in closets or are simply discarded. In a world that is becoming increasingly impact-conscious, this dynamic isn’t sustainable.

Nothing exists between the worlds of prohibitively expensive fashion and cheap mass-produced ‘fast fashion.’ Both of which produce waste and an endless cycle of chasing what is hot today.

By focusing on timeless premium fashion items (think jeans, t-shirts, and leather jackets) that NEVER go out of style DSTLD is not only helping consumers escape the rat race but is doing it in a socially conscious way.

To escape what the company calls the “pervading ethics of waste in the fashion industry” the company has burst onto the scene with a lineup of wardrobe pieces that are fundamental (sticking to just three colors black, white and denim) and well-crafted ready-to-wear items. No absurd blouses that lack functionality here. Just premium denim, silk tops, t-shirts, and cashmere accessories without the fuss.

DSTLD has gone out of its way to revolutionize the fashion industry yet another way by utilizing eco-friendly materials and by partnering only with sustainable production partners foremost. Every single one of its partners and wash-houses are 100% sweatshop free.

The end product is fashion items that have been distilled down to their essence. Selling through the company’s web portal allows DSTLD to offer premium denim and luxury essentials for every closet at 60-80% off traditional real prices.

The US apparel market is enormous at an estimated $225 billion per year. And it won’t surprise anyone to learn that its leading purveyors, Uniqlo, H&M, and Zara, are collectively worth a whopping $200 billion in market capitalization.

But times are changing.

Today an estimated $80 billion of this $225 billion in total industry sales occurs online. E-commerce was practically nonexistent to the fashion industry two decades ago.

As a fashion brand that is entirely reliant on digital sales DSTLD is part of the future. Many of the long standing major department stores and fashion brands spend huge portions of investor conference calls discussing their pivots towards omnichannel selling (an industry term that means interacting with customers in-sto re and on the internet). DSTLD instead has focused its entire business on perfecting the e-commerce selling strategy. It’s in the teams DNA.

Disrupting the fashion industry will be no easy task. Entrenched brands are trying to invest heavily to fend off competition, and DSTLD isn’t the only company to offer simple American-made fast-fashion. The story of American Apparel is a cautionary one.

By focusing on online sales (American Apparel had lots of retail stores with vast inventory in addition to a web portal), with a select set of try-on stores, DSTLD can stick to what it’s good at and stay lean. Try-on stores that allow users to interact with the clothing has proven a viable way to grow online business, without creating a highly capital intensive network of retail stores.

Many brands like Warby Parker, Bonobos and Untuckit have taken a similar approach investing in a select number of showroom “try-on” stores in flagship cities to help expand the reach of the brand while minimizing footprint and spend on retail locations.

DSTLD’s major differentiators are price and simplicity. Many brands have sought to bring fast-fashion to the mass market (True Religion for example), but few have made a go of cutting prices to buy customer loyalty.

In their investor presentation the company devotes an entire slide to the premise that “Denim shouldn’t cost $200): 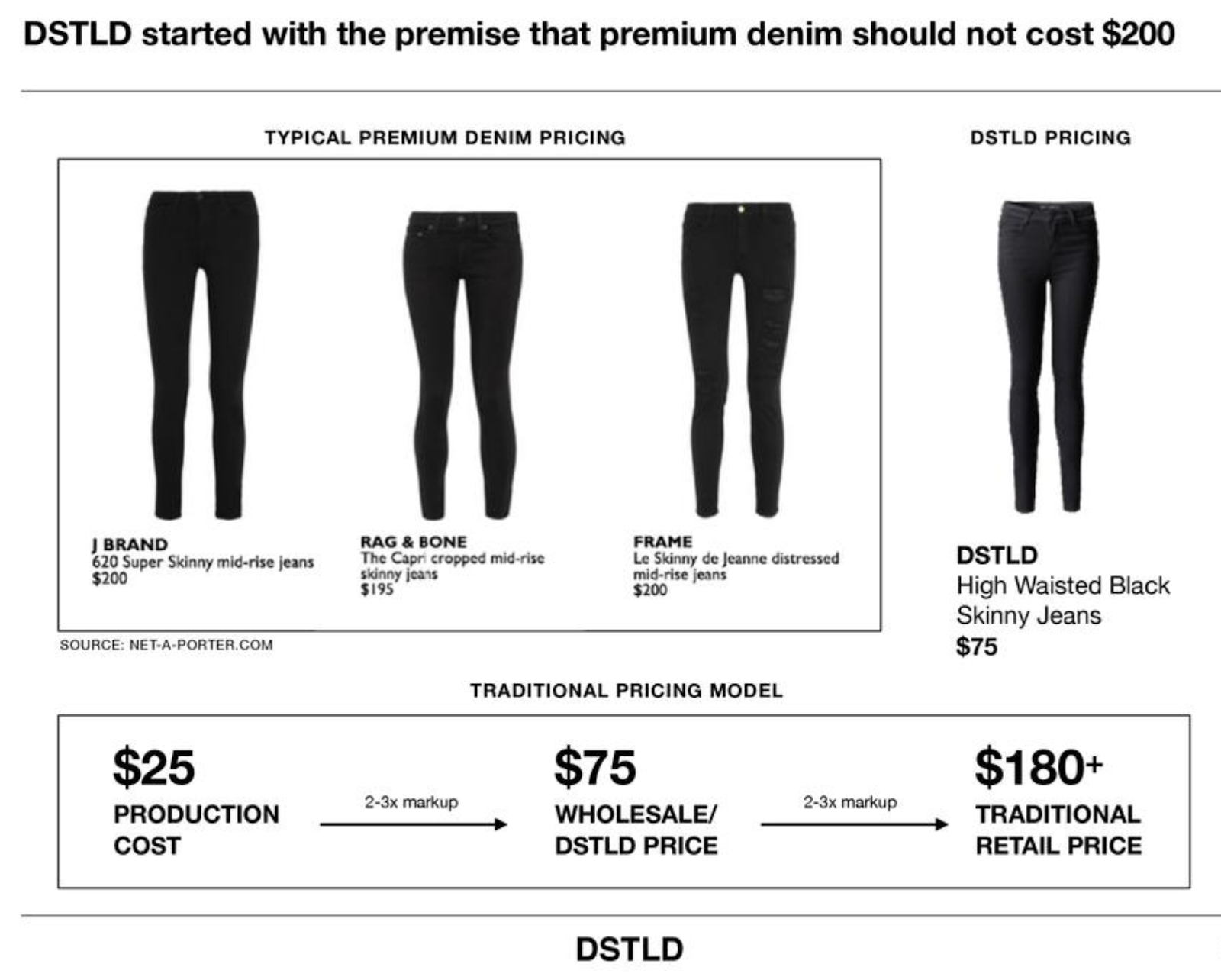 Winning won’t be easy, but it seems to us that someone will eventually disrupt the overpriced fashion industry with a no-frills lineup of reasonably priced clothing items that look great. We think DSTLD has shown signs they can be one of the leading companies in this market position.

To break through the noise of the fashion industry DSLTD has devoted a sizable portion of their past capital raises to marketing and ke y hires. The company has a strong value proposition – it is spending the money to ensure the right audience is hearing the message.

The strategy is gaining traction: 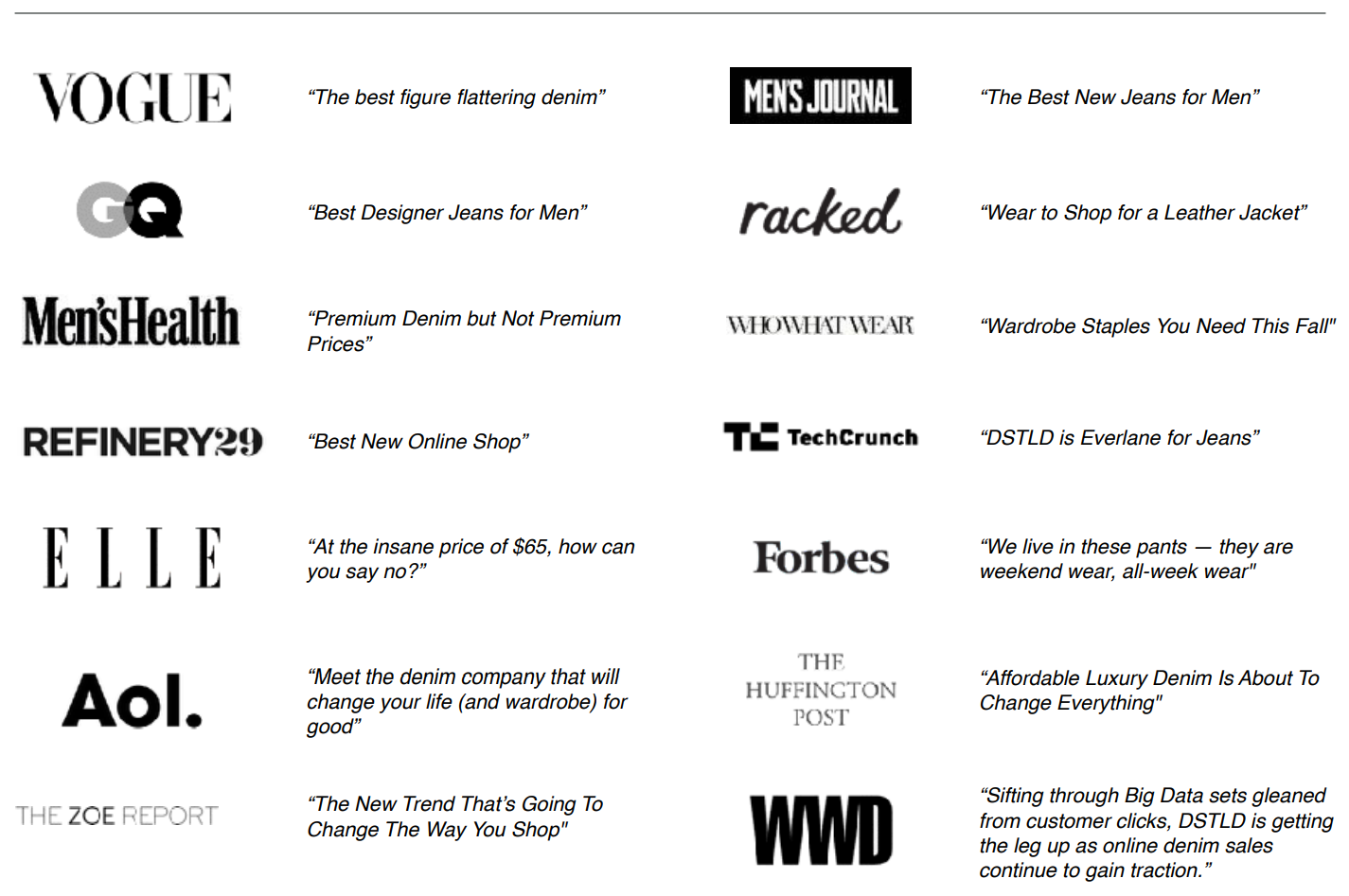 One of the newest tactics for any online brand has been influencer market – getting celebrities to act as ambassadors for your product.

DSTLD has taken the lead here as well: 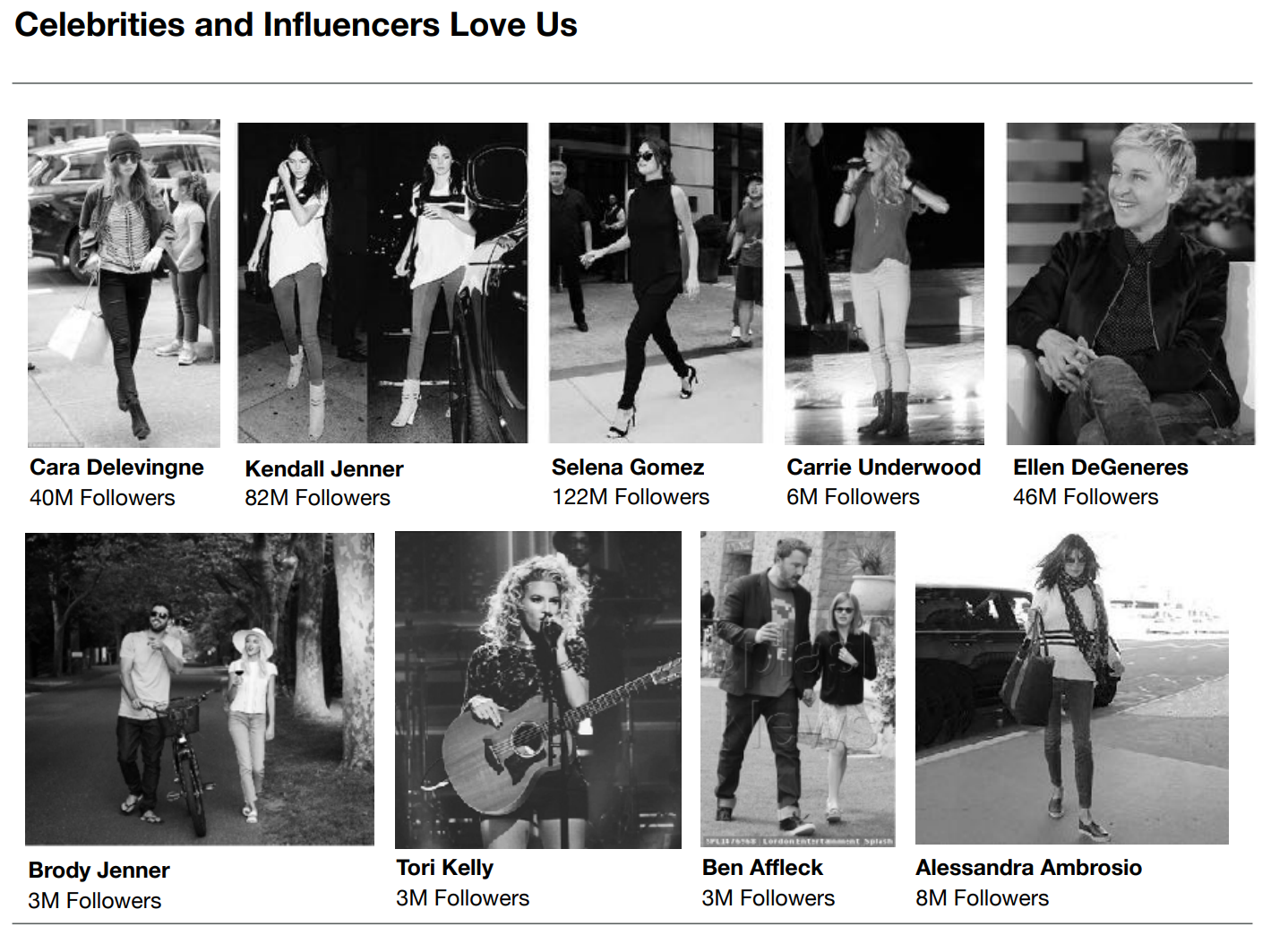 All this ‘distilled’ marketing has had impressive results. Since 2015 lifetime sales have grown from $3 million to $14 million for a compound annual growth rate of 149%. In the past 12 months YoY sales have risen 79% — something practically unheard of outside the software or IT industries. All told the company counts 69,000 individual customers that have purchased an average of 2.87 items (up from 2.68 during its last campaign). Great news as it is an indication that repeat business is already a common occurrence.

Any business needs to acquire (and retain) customers at an economically feasible cost. At present DSTLD estimates its customer acquisition costs to be ~$40 with a 4.5x payback within three years – not bad. 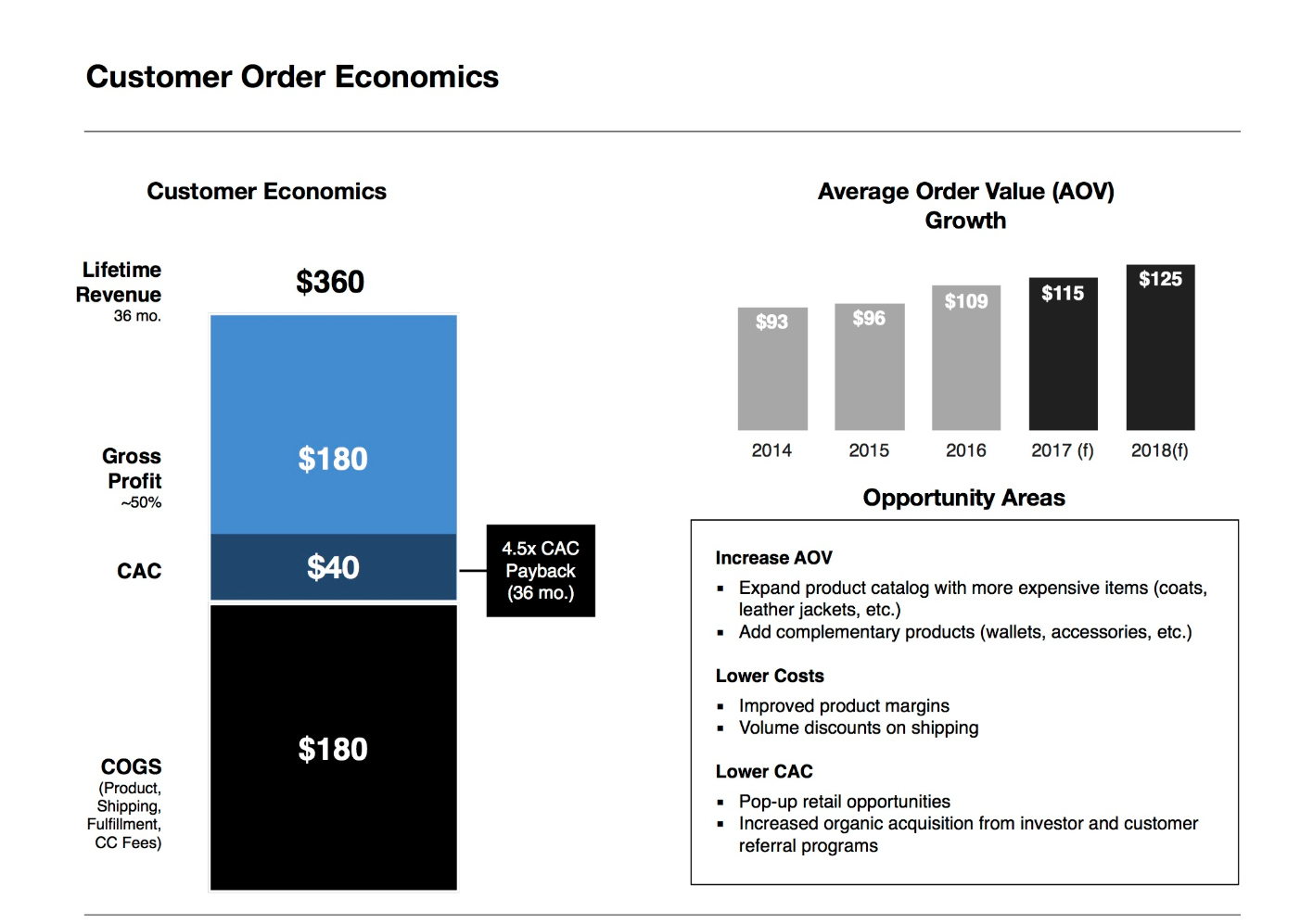 As the reader can see from the Average Order Value Growth chart in the upper right of the slide the value of each customer (of which there is a rapidly increasing total ) is likely to increase again this year.

The company is operationally profitable with gross margins for FY 2016 (the last year the company has audited results) coming in at 38.3% — a good sign for a new entrant in the clothing manufacturing business. Last year H&M’s gross profit margin registered at 52%. A target that DSTLD could feasibly hit as customer value and counts expand to escape velocity.

The team has raised $9 million to date including two prior equity crowdfunding rounds. One round was completed on SeedInvest. With $14M in sales to date, the the team continues to show significant revenue growth progress.  Currently DSTLD is seeking to raise up to $1 million.

This, coupled with the robust customer growth we mentioned early means DSTLD is finding product-market fit that can be accelerated by an additional round of capital.

It’s not everyday that a new fashion brand pops onto the scene. Guessing at potential exit outcomes DSTLD requires some imagination. Fortunately, there’s plenty of anecdotal evidence suggest there will be opportunities for further investment and acquisition down the road.

Outside of future investment opportunities, we think acquisition opportunities will also present themselves. For instance, Bonob os was acquired by Walmart for $310M and Stitch Fix is now a public company at an $3B valuation. Online clothing retailers liker Stitch Fix that is public will likely look for expansion categories to help grow into their enormous valuations, which should present some unique opportunities for brands like DSTLD down the road.

DSTLD was founded by co-CEO’s Mark Lynn and Corey Epstein.

Mr. Lynn, an Irish-born serial entrepreneur that chose LA as his home, has 15 years of experience under his belt in industries ranging from boutique hotels to designer real estate development and wine distribution. It was in the latter than Lynn found notable success. DSTLD isn’t Lynn’s first rodeo as a co-founder. Before trying his hand at fashion, he was the co-founder of winc.com – a subscription-based e-winery that quickly became one of the largest and fastest growing wineries in the U.S.

Mr. Epstein, who also serves as Creative Director, first found success as a Senior Consultant with Deloitte where he specialized in Retail Strategy. Also no stranger to the entrepreneurial world Corey Epstein has also run his own marketing and web consulting firm.

Both seem to be the right individuals to take DSTLD all the way.

Taking on the big fashion brands of the world sounds challenging, but as our CEO, Chris Lustrino wrote earlier this week, when evaluating early stage companies, it is all about identifying great products that won’t follow the market, but rather can completely change the market. That is the type of product we have in DSTLD that is challenging the notion that you can’t be affordable and fashionable.

After surveying the marketplace, we here at KingsCrowd think the time for high-quality denim at reasonable prices is now based on how customers have responded to DSTLD. Other large VCs have already invested in DSTLD including Arena Ventures, Crunch Fund, and Black Oak Capital Partners. Revenue growth continues, management is showing a strong ability to execute and the market is reacting accordingly.

For these reasons, we believe DSTLD is a TOP DEAL (reserved for the top 10% of a ll equity crowdfunding deals) worth consideration in your investment portfolio.