The Ternio team has been selected as a “Top Deal” by KingsCrowd. This distinction is reserved for deals selected into the top 10% of our due diligence funnel. If you have questions regarding our deal diligence and selection methodology please reach out to hello@kingscrowd.com.

The financial technology space is undergoing a period of rapid and significant transformation. A big part of this space is payment processing, which for decades has remained largely stagnant. The advent of new technologies like digital wallets and cryptocurrency, and the widespread adoption of the Internet and smartphones has ushered in a new era of opportunities. Seeing this as fertile ground for entrepreneurial souls, Daniel Gouldman and Ian Kane have set up fintech firm Ternio. Its objective is to capitalize on this paradigm shift occurring in the markets.  They intend to do this by applying their own answer to the problems the industry faces.

Financial transactions are a pain. This is especially true of ones conducted globally. Not only do they take time, the cost for instant transactions is high. ACHs and wire transfers can cost north of $25 to complete. To get around this, cryptocurrencies were eventually created, but these so far lack the support needed to go mainstream. Today, hundreds of billions of dollars worth of cryptocurrencies are outstanding.  But still, using them for regular day-to-day purchases is a challenge.

To address these shortcomings, Gouldman and Kane have worked with a team of skilled people to create Ternio and its signature BlockCard offering. When users sign up on the company’s website or through its mobile app, they are provided a digital wallet and a physical payment card that they can use for everyday transactions. They log into their account, transfer their crypto funds, and can instantly make transactions with vendors all across the US. 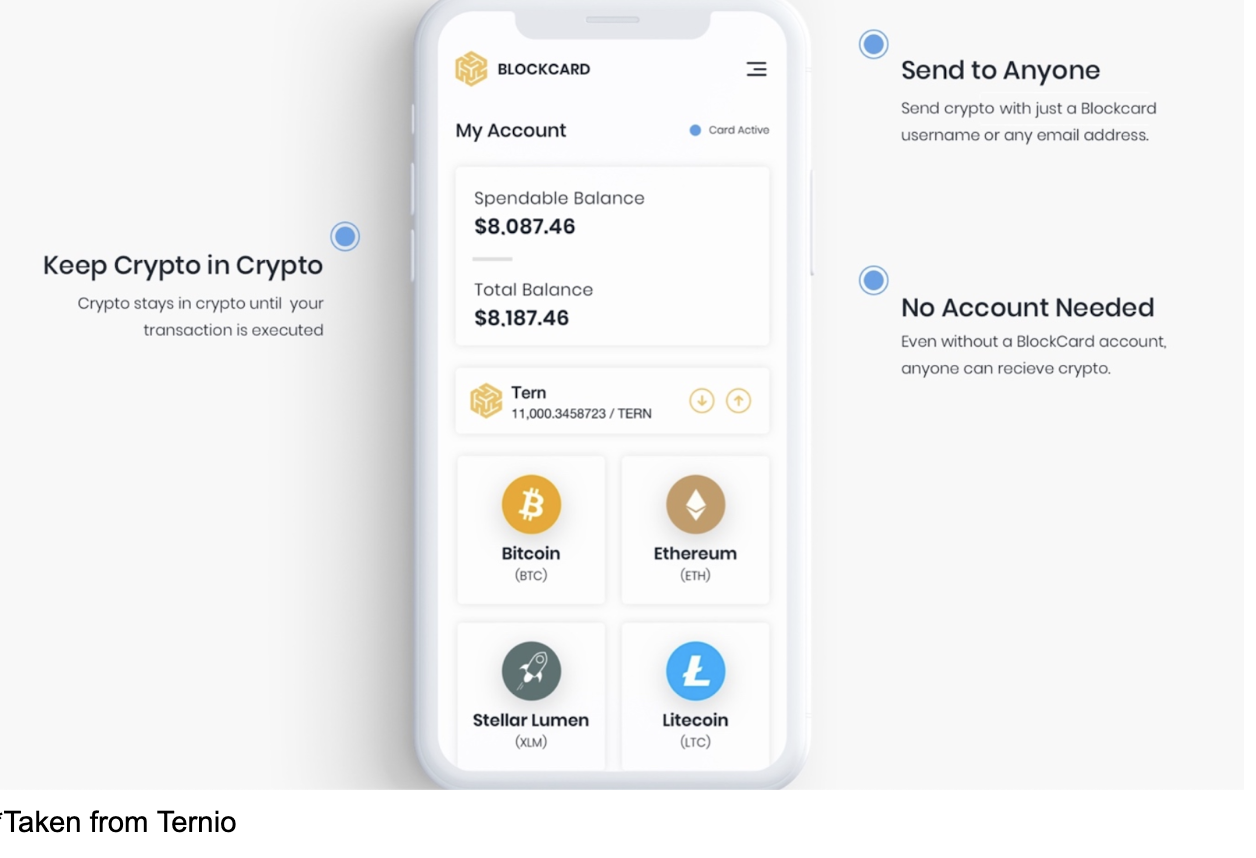 Today, the company’s largest partner is none other than VISA. This allows the card to be used at more than 50 million merchants in the US. In addition to working with VISA, Ternio has allowed 11 different enterprise-level partners to white label its card. Perhaps the most prominent partner on this front is the Litecoin Foundation. Whenever a payment is made using the company’s BlockCard, the cryptocurrency on it is immediately converted to cash. This gives users the ability to keep their cash in the form of cryptocurrency for as long as possible.  At the same time, it provides the flexibility to make purchases without having to first manually swap out their crypto. 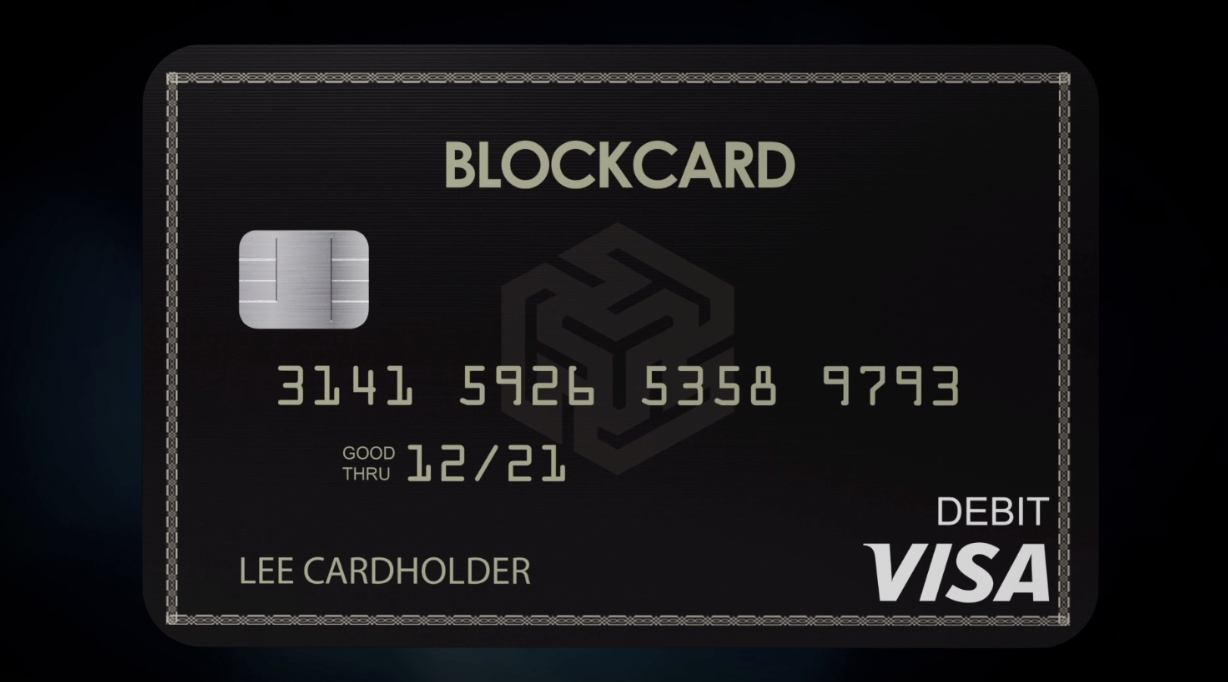 There are several ways management has found to monetize this offering. For cardholders who spend less than $750 per month, they intend to charge a monthly subscription of $5. The image below also illustrates a range of fees the company charges, ranging from as little as $0.50 to as much as $50. Ternio will also share in fees generated by its users, plus it will see its share of the 1% to 3% interchange fees merchants are charged. 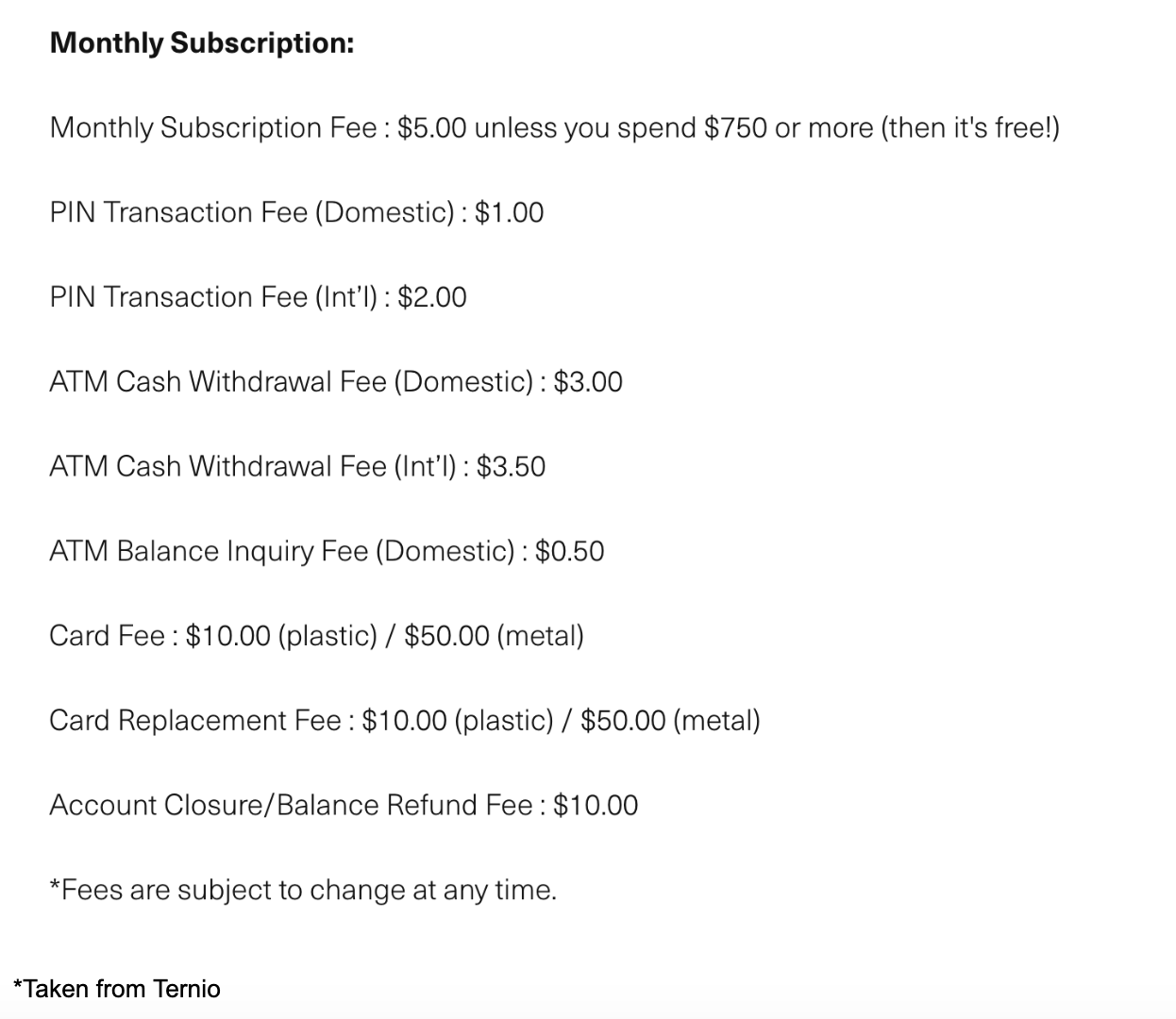 Founded in January of 2018, Ternio has seen remarkable growth. That year alone, the company generated revenue of $1.20 million. Perhaps even more remarkable was the fact that it generated a profit during the year. The size of its profit was only $54,464, but any sort of positive net income so early in a firm’s life is rare. Between its arrangement with VISA, its white label partners, and international expansion planned, the company expects revenue to grow significantly.

Today, the company already operates in the US, but it is seeking to launch soon in 150 different countries, including 31 European ones. Their plans also include adding on valuable features.  These include Apple, Google, and Samsung pay support, and providing virtual checking accounts to pair up with VISA. A rewards/loyalty offering and the ability to give its users loans is also on the horizon.

It is worth mentioning that while Ternio has a rapidly-growing business, it’s not the only player in this space. In the table above, you can see how the company stacks up against other major card alternatives. Not listed, but perhaps its biggest rival, is fintech firm Revolut. The London-based company is multi-faceted in the respect that it offers pre-paid cards, currency exchange features, and peer-to-peer payments on its platform. In 2018, it raised $250 million, valuing it at $1.7 billion. In the five years that will follow, the company is targeting 100 million users.

The best markets are those that are large and quickly expanding. That’s precisely the space that Ternio is playing in. There are several ways we can prove this to be true. We chose three: look at the pay card market, look at the cryptocurrency wallet market, and look at the digital wallet market. This should give us the ability to grasp more or less the size of the opportunity the company is tackling. 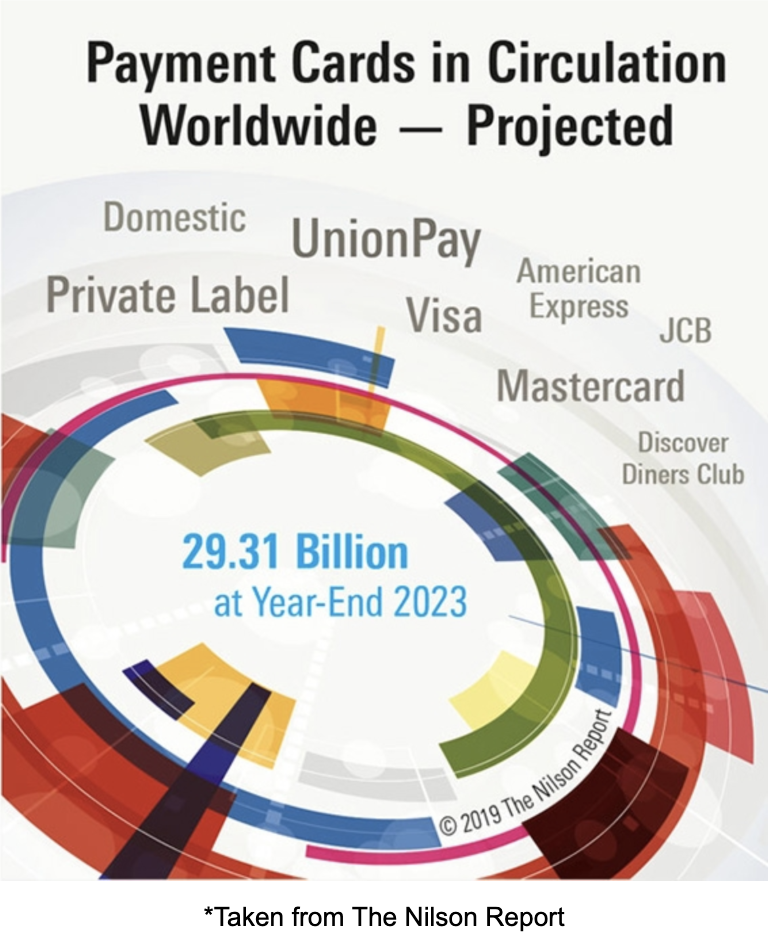 In 2018, it’s estimated that there were 22.11 billion credit, debt, and pre-paid cards in circulation worldwide. In the US alone, the cards in circulation accounted for $10.086 trillion in purchase transactions. By 2023, the number of cards in circulation will have grown a further 32.6%, or 5.8% per annum, to 29.31 billion. A key driver for this will be the transition of some of the world’s 1.7 billion unbanked individuals becoming banked. With more than 225 million unbanked consumers in China and 190 million in India, it’s no wonder that the Asia/Pacific region has been more open to new technologies. In China, a full 36% of transactions last year were conducted by mobile wallets. In India, that figure was 6%. By comparison, in the US, the rate was only 3%. 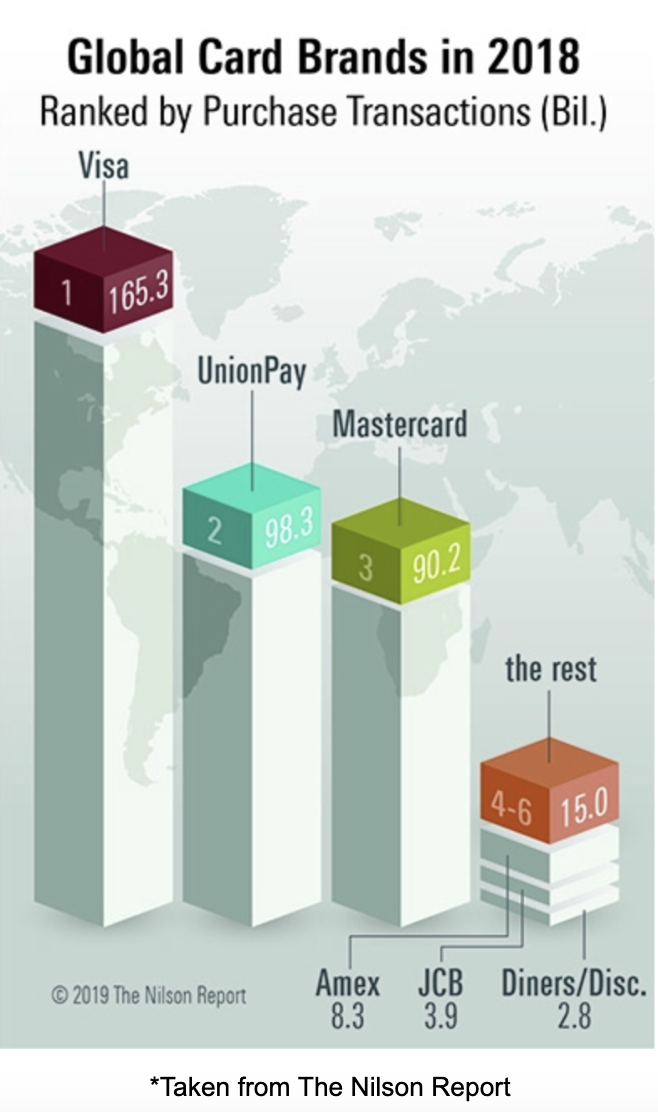 When it comes to pay cards, Ternio has picked the best partner imaginable. In 2018, VISA’s cards accounted for 165.3 billion purchase transactions across the globe. This accounts for 44.8% of the 368.9 billion purchase transactions completed worldwide last year.  What’s really great is that VISA continues to capture attractive growth. In just the fourth quarter of this current fiscal year, the company conducted $2.27 trillion worth of transactions . This is up 7.3% over what it conducted the same time last year. The company’s profitability also points to what a firm like Ternio might someday become. This year, operating cash flow at VISA is forecasted to total $12.78 billion, while free cash flow should be $12.03 billion.

The second way to look at this market is through the lens of the cryptocurrency wallet market. In recent years, the adoption of digital wallets dedicated to cryptocurrencies has been vast. As of the third quarter of this fiscal year, there were an estimated 42.29 million of these wallets worldwide. This represents an increase of 46.4% over the 28.89 million that existed just one year prior. 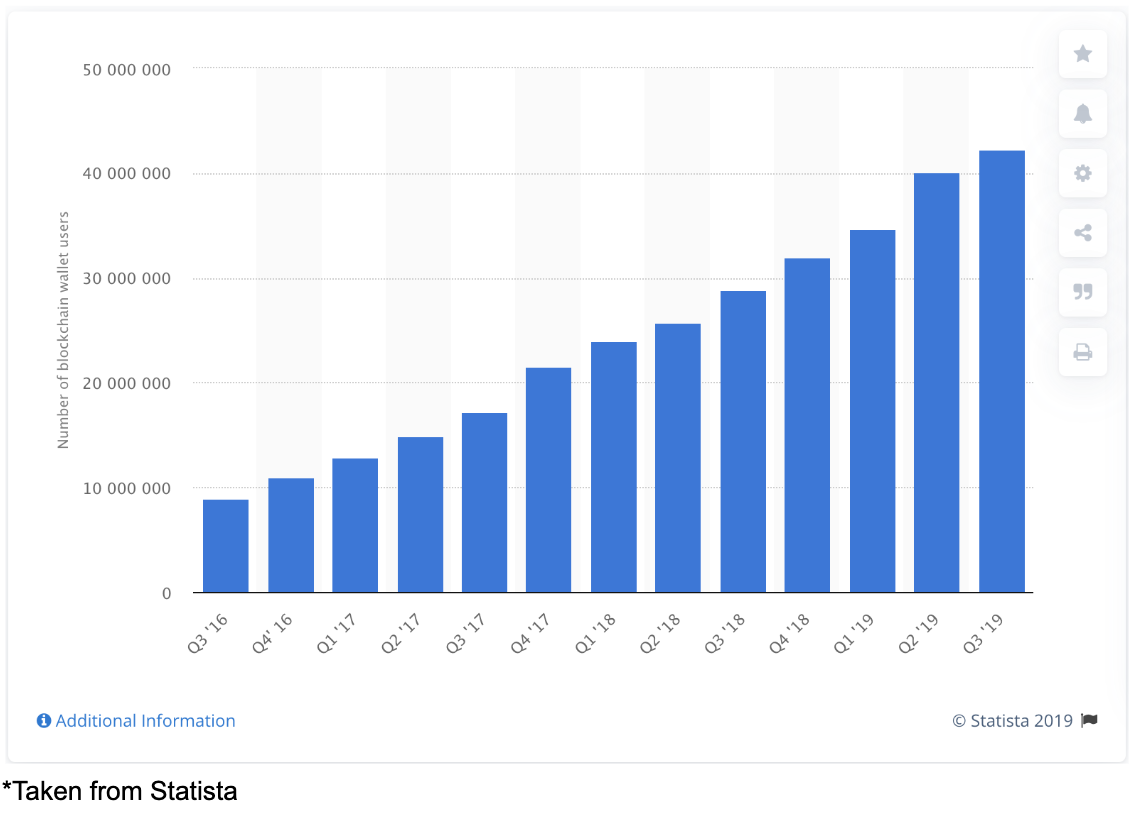 While the adoption of cryptocurrency is impressive, it’s just one piece of a larger pie: digital wallets in general. As was already mentioned, places like China and India have already seen sizable parts of their population move in that direction.  Still, though, there’s plenty of room to grow. According to one source, the number of global mobile wallet users has been expanding at a rate of about 140 million per year. This year, that number is forecast to be nearly 1.10 billion, up from 945 million last year. By 2022 this number is expected to rise to 1.50 billion. 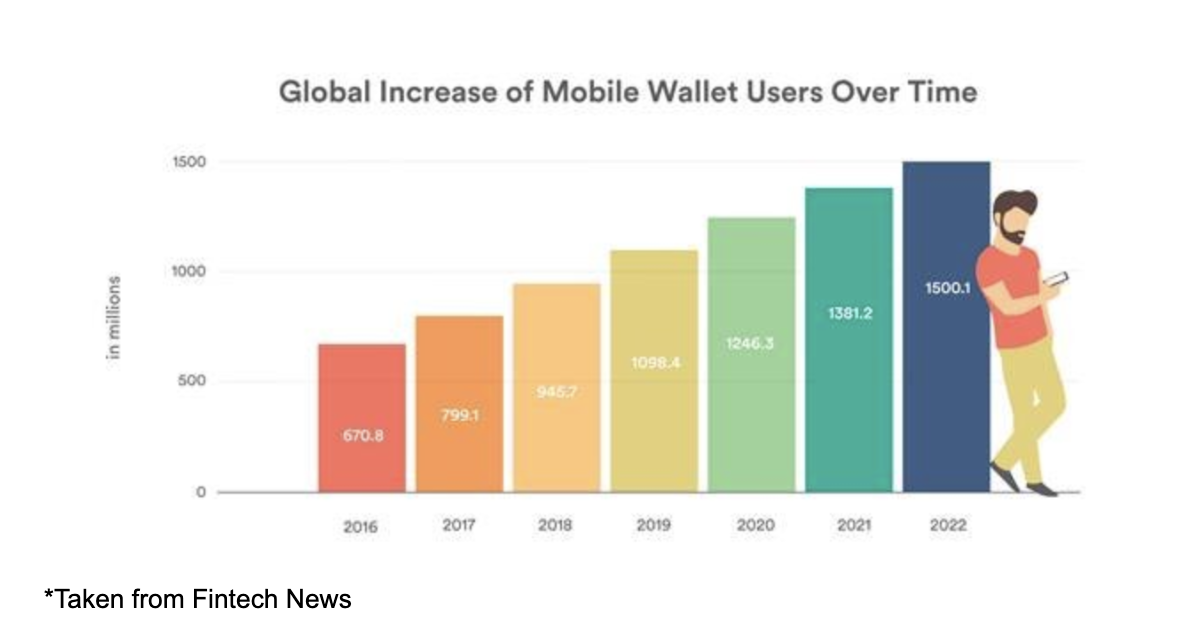 Not only is global wallet user count rising, so too is the average amount of money people spend with them. Over the forecast period, the average annual spend per wallet has been rising by about $124. This year, that number is estimated to be $677.90. This is up from $384.40 in 2016. By 2022, the number should soar to $1,128.60. Fueling this rise are two groups: today’s youth and today’s well-to-do. A full 35% of users range between 25 and 34 years old, while an additional 20% are between 18 and 24. Even as this technology empowers the unbanked around the world, 40.4% of users are still high-income. 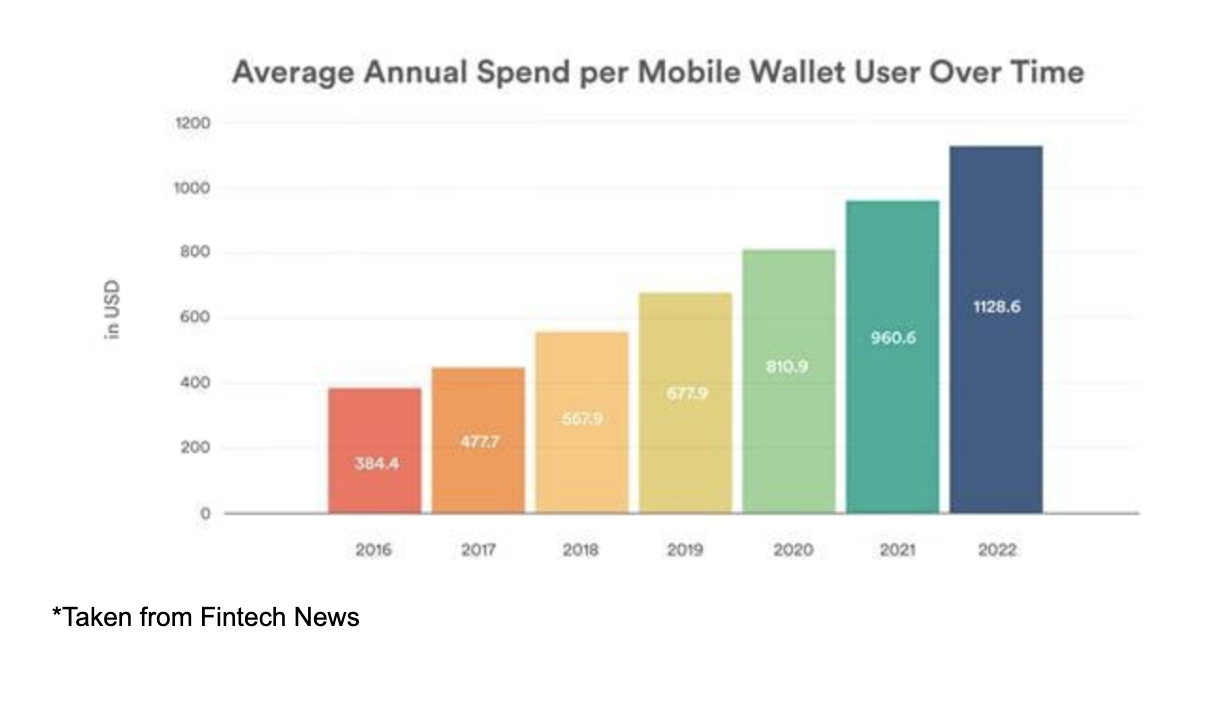 The transaction sought after by Ternio is set up as your basic SAFE. In exchange for a minimum investment per participant of $100, the company is giving out these notes.  They will convert at the next raise, subject to a $15 million valuation cap. Each note’s conversion factors in a 20% discount. The price, subject to the valuation cap at which it converts, would be done as though the company were worth 20% less than incoming investors value it at. The minimum investment sought after by the company is $25,000, but its target raise is for $1.07 million. As of the time of this writing, the company has $113,755 committed to its raise.

The team at Ternio is extensive, with 12 members in all listed. The two core members, its founders, though, are Daniel Gouldman and Ian Kane. Gouldman operates as the company’s CEO. Prior to his time at Ternio, he served as the founder and CEO of AD3, an ad technology firm. Before that, he was a Regional Vice President at Public Storage from 2010 to 2015. Kane, prior to co-founding Ternio with Gouldman, was an Advisory Board Member at Tersai Corporation, a self-serve display advertising marketplace for small and medium sized businesses. Before that, he operated as the Chief Revenue Officer at AD3.  His experience prior to that was as a Senior Director of Publisher Solutions at Tapad, a company that monitors consumer interactions cross-device for publishers.

It’s rare to find a truly remarkable deal, but this is where Ternio comes in at. We at KingsCrowd have decided to rate the company a “Top Deal”. The reasons behind this decision are manifold. The company has come into existence over a short period of time. and in its first year of operating it generated significant revenue growth and a net profit. Its partnership with VISA is monumental.  Its white label arrangements add significant value potential as well. The company’s revenue strategy is clear and its decision to focus on the cryptocurrency side of payments first allows it to expand with ease. Add to this the large and quickly growing market the company is exposed to, and it’s difficult to see much in the way of downside here.

This does not mean that Ternio is without risks or other downsides though. The SAFE’s valuation cap, while not unreasonable, is not exactly cheap. Perhaps more painful, though, would be what might happen if VISA were to ever back out of this arrangement. It is the perfect partner, but it also makes the company dependent on VISA’s thinking that where Ternio benefits, they benefit too. This makes the firm’s diversification to other platforms like Apple, Google, and Samsung all the more important. The final risk relates to management.  They have significant credible experience. But none of it really focuses on the cryptocurrency or payments processing space. This creates some execution risk. Even for these risks, though, the upside does look incredibly appealing. It’s difficult seeing this as anything other than an attractive risk/reward opportunity as far as startup investing goes.