Xcite Interactive has been selected as a “Top Deal” by KingsCrowd. This distinction is reserved for deals selected into the top 10% of our due diligence funnel. If you have questions regarding our deal diligence and selection methodology please reach out to hello@kingscrowd.com.

Live entertainment events are a big business, but so too are mobile games and other interactive experiences. It is only natural, then, that when possible, the two might merge. Enter Xcite Interactive. The company was established by Sean Hopkins and his team to collaborate with live entertainment providers. For the most part today, that includes sports organizations. They aim to create immersive, value-add experiences for live event viewers and participants.

Sports and other forms of live entertainment in the US, and the world as a whole, is big business. At these events, participants’ eyes are typically glued to the field (or to the television screen when at home). But when the players step off the field, the need for the average person to continually be stimulated calls. The result: viewers move immediately to their phones. This may not sound like an issue. However, it represents a significant opportunity lost by live entertainment providers. In Xcite’s own analysis, for instance, it found that the average NFL game broadcast lasted 3 hours, 12 minutes. A full hour of broadcast time was dedicated to commercial breaks. That is a lot of time that companies can spend catering to (and generating value from) their viewers. 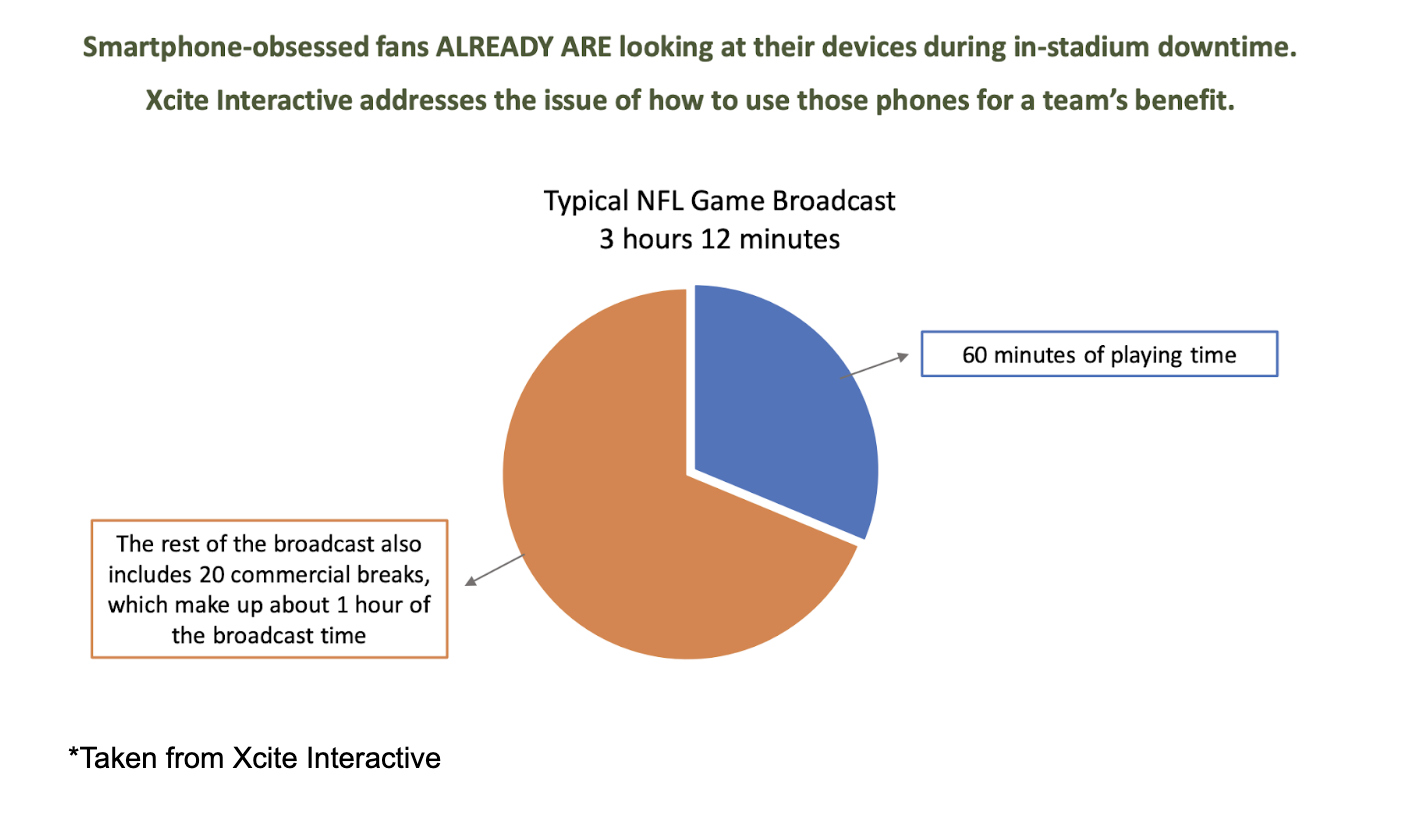 To address this, Founder Sean Hopkins and his team set out to build and grow Xcite Interactive. The company positions itself as a producer of digital media in interactive games and other formats. Its goal is to thoroughly engage audiences during commercial breaks and other non-active periods. To create value for its clients, it adds in marketing tie-ins and other revenue-generating opportunities. One example of the products/services it offers is a game called Tug of War. On users’ phones and the big screen during live event breaks, the company can feature two ‘mascots.’ Each mascot can be a different bottle of soda, cars, food, etc…. During the competition, fans choose which contestant they want to win, with each vote adding to the strength of their mascot. If the live event provider desires, it can even offer prize fulfillment opportunities to the members of the winning team. 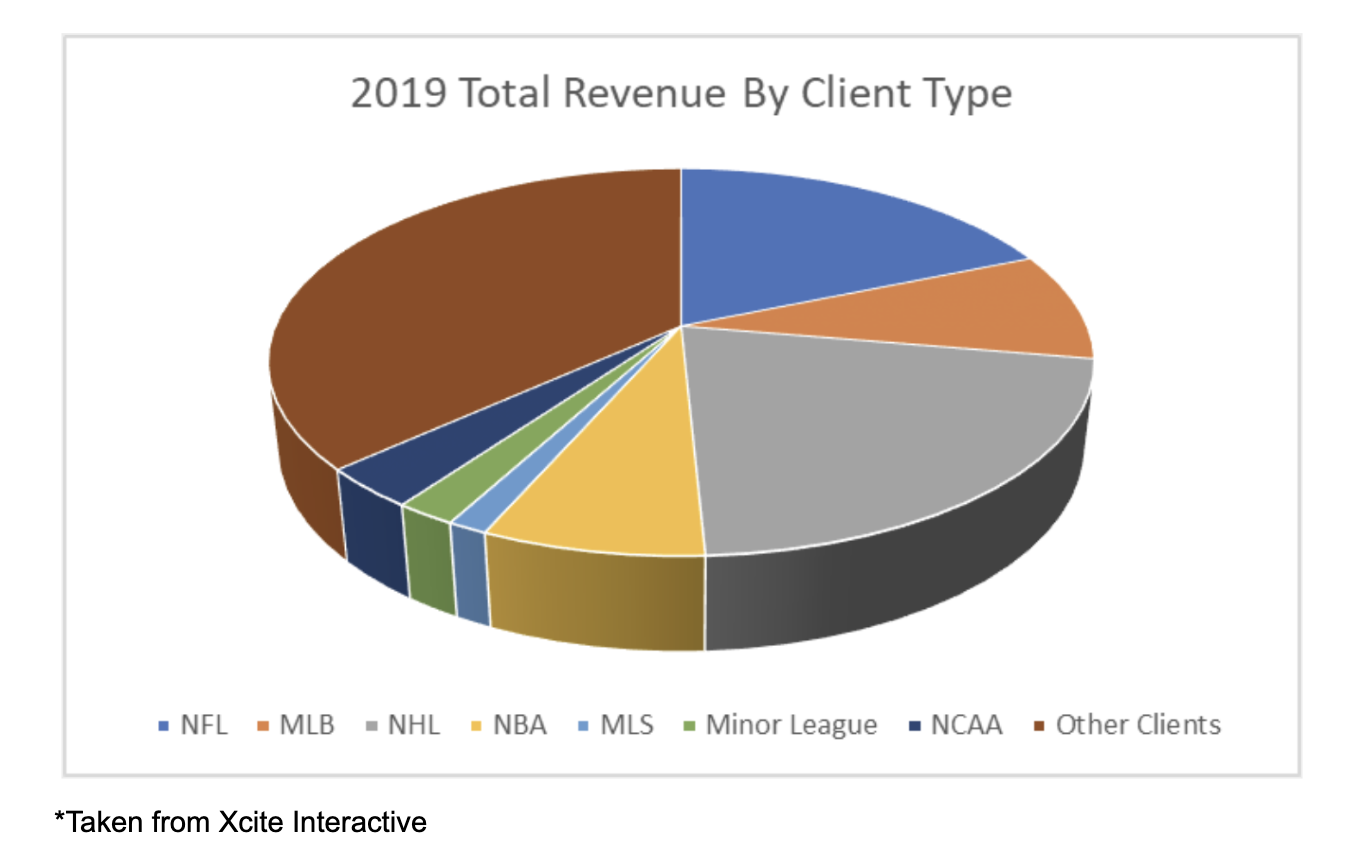 The company has many other options for its clients to choose from as well. Its Interactive Noise Meter, for instance, can be used to allow users’ phones to act as a noise meter at events. Flash Point, meanwhile, enables color scheme synchronization on a phone. This will enable them to use their mobile devices to replace LED bracelets. The company’s Predictive Gaming Platform, which was purchased by the NFL, permits viewers to wager ‘Fan Bucks’ on any game’s outcome. The proceeds from these bets are redeemable for certain perks. The company even has something akin to Family Feud called Fan Feud. In all, Xcite has 42 customizable interactive games. It also has interactive crowd products like FanCam and Social Wall. 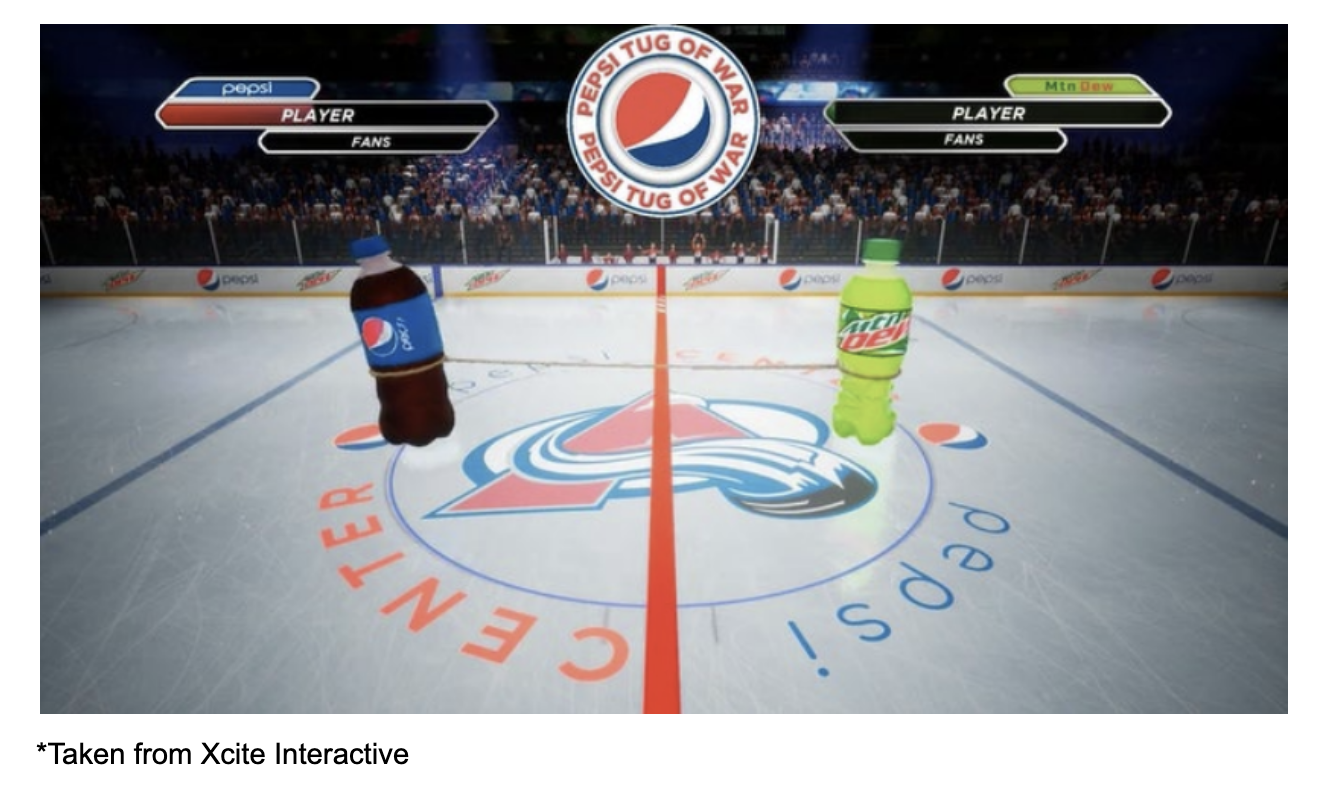 Through its platform, the company generates revenue in several ways. It charges clients directly, but it can also generate attractive data that can be used for marketing purposes. Ad place appears to be another avenue for the firm. In its 2018 fiscal year, the company had 108 clients across major organizations like the NFL, NHL, MLB, NBA, and more. The average revenue per client for the year totaled $23,812. This was up from 75 clients and $19,599 per client in the 2017 fiscal year. At this time, its most significant source of revenue are clients from the NHL, followed closely by the NFL. In all, as of 2019, the company had more than 140 clients. It boasted that more than 200 million fans were engaged with their products across more than 2,500 pro sporting events per year. 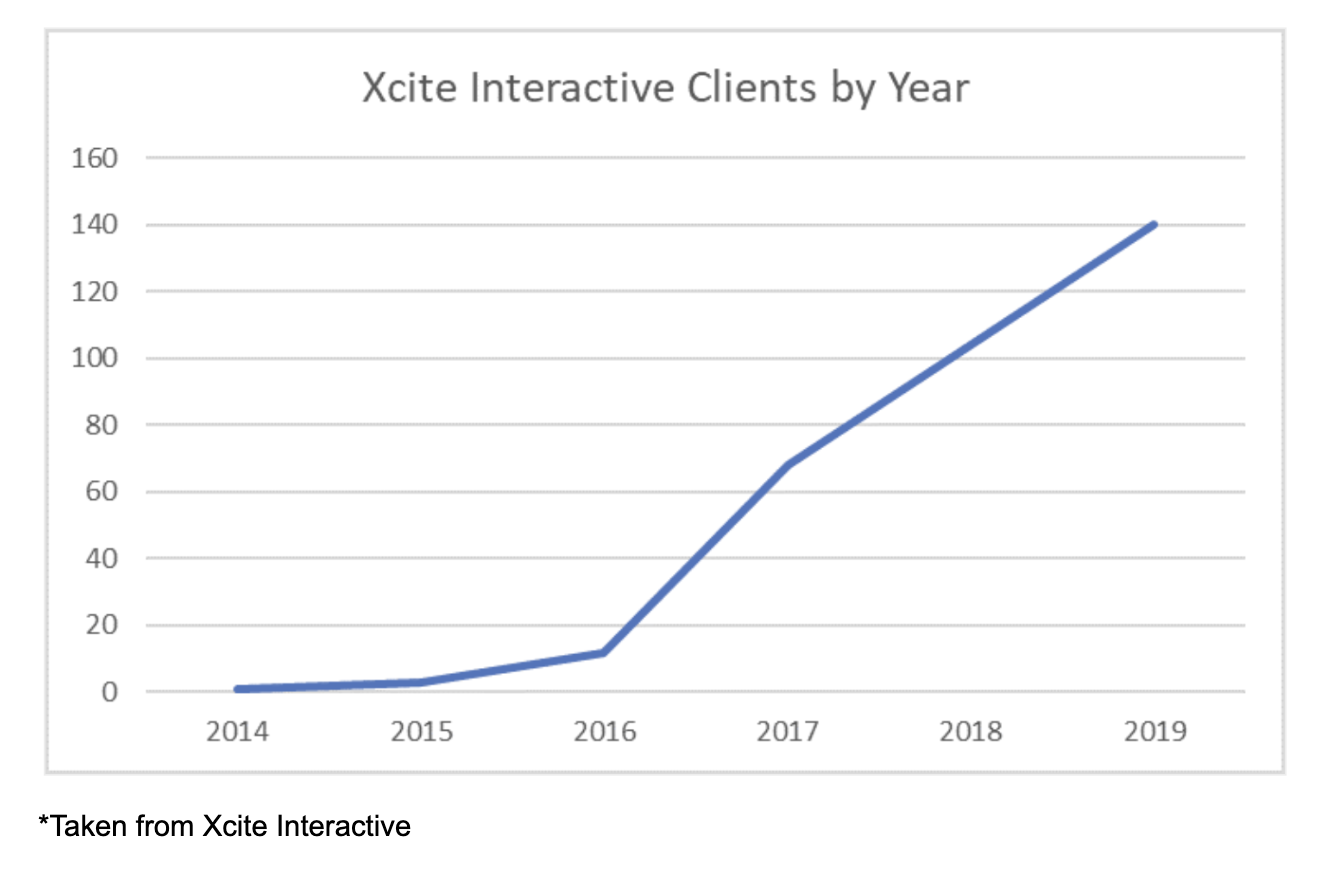 One thing that’s very special about this startup is the company’s bottom line. In its 2018 fiscal year, the company generated a net profit of $165,710. Any sort of profit for an early-stage firm like this is remarkable, and it represents an improvement over the $125,896 loss generated a year earlier. Operating cash flows have been even more impressive. In 2018, the company generated positive cash flows of $341,179, up from net outflows a year earlier of $177,090. Revenue has also been growing, rising from $1.47 million in 2017 to $2.57 million in 2018. 2019 fiscal results have not yet been provided. But if the same revenue per client holds year-over-year, investors should expect sales of at least $3.33 million for the year.

While full 2019 figures have not been provided, the company did report them for the first quarter of the year. Off of revenue of $447,268, the company saw a net profit in the first quarter of $25,281, while its operating cash flows were $327,988. This cash flow number, while impressive, should be taken with a grain of salt. If you ignore changes in working capital, the figure would have been a more modest (but still very impressive) $125,004. 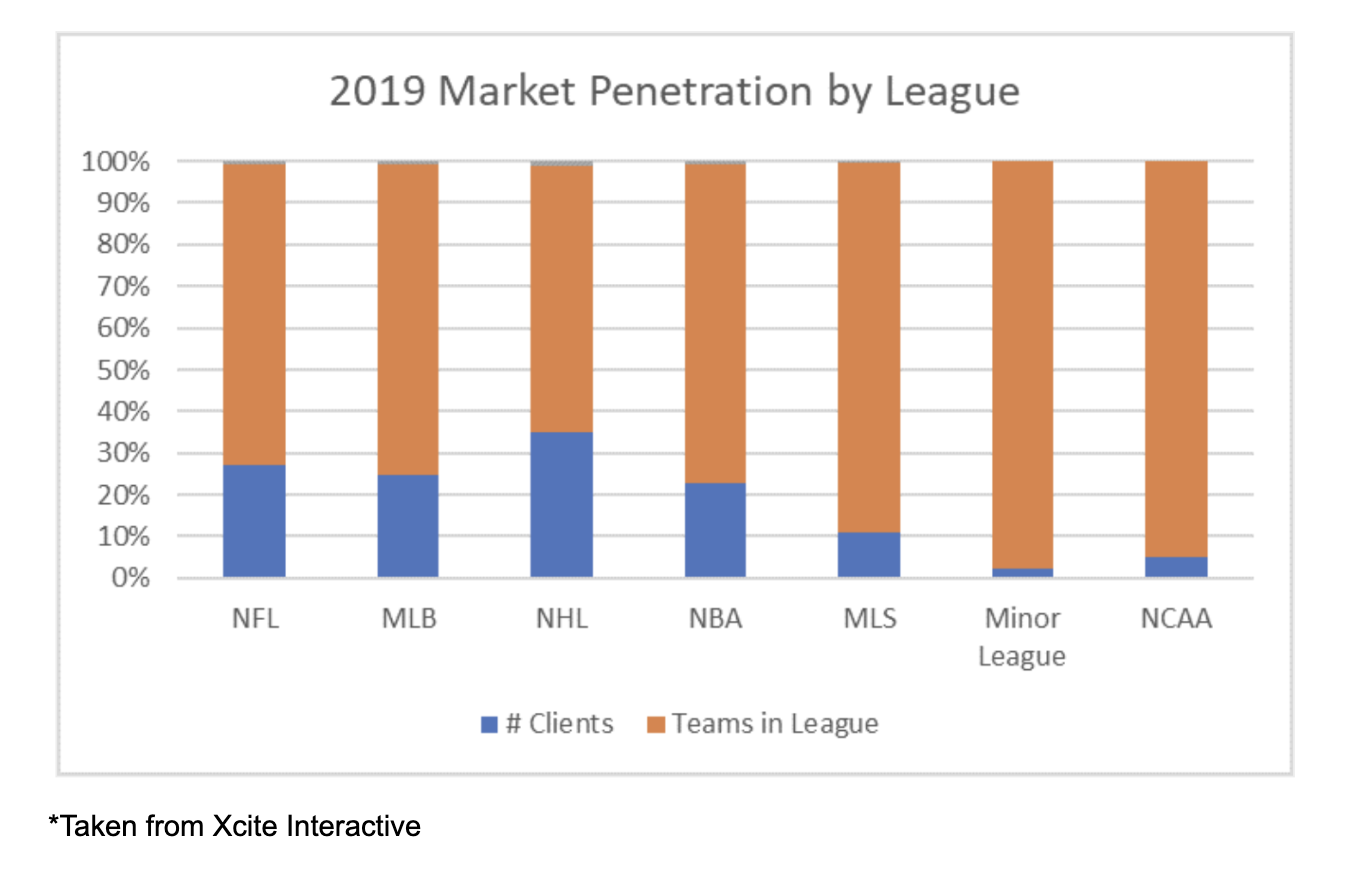 Moving forward, management has big plans for the business. They believe that they can grow to around 5,000 clients and $50 million in revenue if they touch just 20% of the global sports market. Management has also identified four other markets as well: concerts/cruises/special events, concourse interactive, bespoke AR/VR, and predictive gaming. Collectively, the five markets it is aiming for, if it captures the market share it anticipates in each one, is significant. In all, the company sees the annual revenue opportunity amounting to $425 million, spread across 95,000 distinct clients.

Few markets are as appealing as the one in which Xcite has found itself. Globally, the gaming market last year was estimated to be about $152.1 billion in size. Of this, the mobile gaming market accounted for a share of 45%, or $68.5 million. This represented growth of 10.2% year-over-year. This was not just a one-time growth surge, though. In the 18 months ending in mid-2019, $9.6 billion had been invested into the space. If that trend continued through the end of the year, the 2018-2019 timeframe would see more investment than the prior eight years combined. 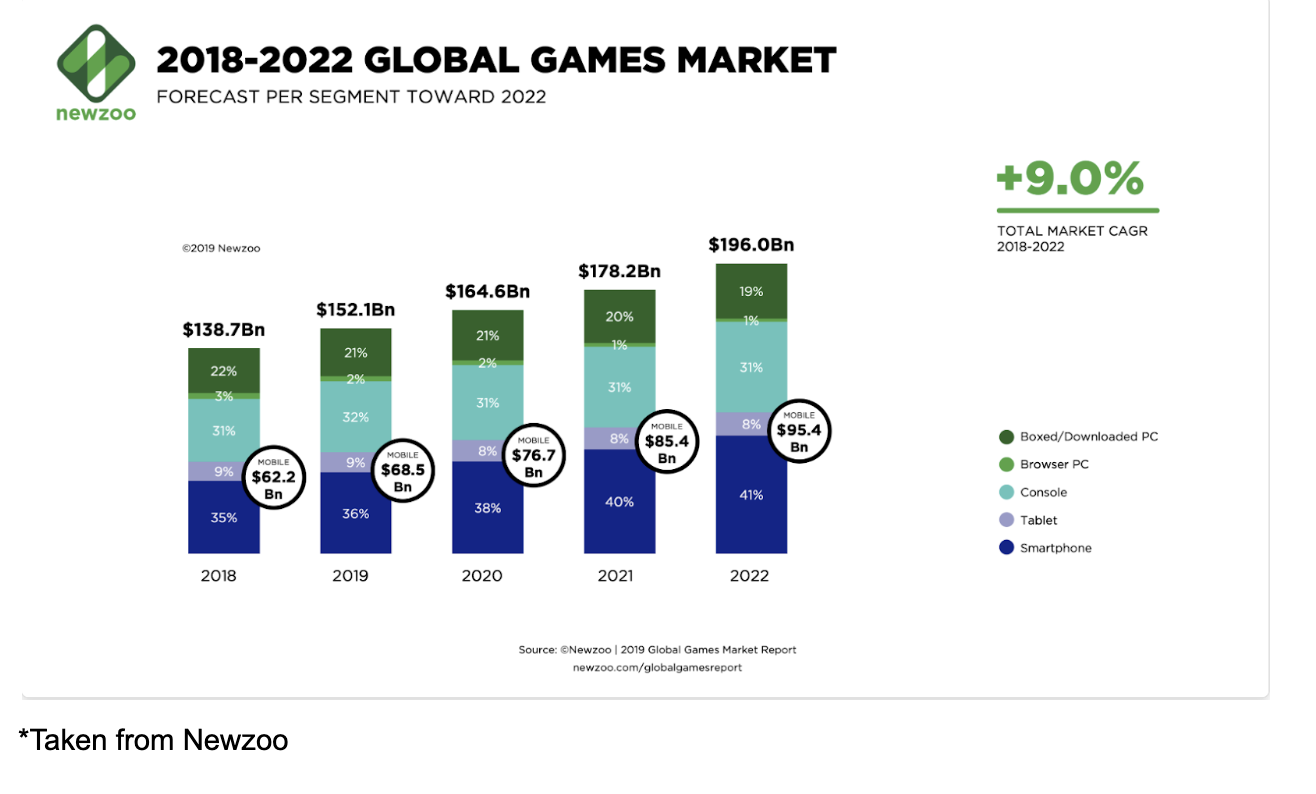 If forecasts are accurate, mobile gaming should continue to fare well. Just consider the statistics. 33% of all app downloads and 10% of all time spent in-app on mobile devices center around games. Even more impressive is the fact that 74% of all consumer spending through apps occurs in the gaming space. It’s estimated that last year alone, 2.4 billion people played mobile games, and a full 50% of mobile app users played them regularly. Last year, the average person spent eight minutes more on mobile devices than on television. By 2021 this divide is expected to grow to more than 30 minutes. What’s also encouraging is that gaming is becoming more popular with the older generations. In 2014, the average age of a mobile gamer was 27.7 years. Today, that figure is 36.3 years.

Over the next few years, the upside for players in this space is tremendous. By 2022, consumer spending on games across the board should grow to about $196 billion. A full 48.7% of this revenue, up from 45% last year, will be attributed to mobile gaming. This means that by 2022 mobile gaming will be responsible for $95.4 billion in revenue, representing a CAGR of 9%. This is to say nothing of secondary revenue opportunities for Xcite, like marketing/ad placement, data sales, and more.

The deal structure proposed by Xcite is relatively simple and straightforward. According to the company, it is seeking between $400k and $1.07 million in this current capital raise. In exchange, it is offering up common shares of its business, with a minimum investment per participant set at $100 and a price per share of $5.03. As of this writing, the company has only $15,070 committed to its cause. Such a low commitment is baffling given its position today, but that might be due, in part, to its lofty $18 million valuation. Though seemingly high, this valuation looks fine considering strong sales growth (up 75% in 2018 versus 2017) and the company’s ability to generate a profit and positive cash flows.

At this time, Xcite has a pretty extensive team. Excluding Director-only roles, the company has seven members on its team. At the top echelon, though, are two individuals: Founder and CTO Sean Hopkins, and CEO Bud Noffsinger. Prior to his time setting up Xcite, Hopkins served as a Production Manager at KMBC-TV 9. Before that, he was a Member of River Key Creative, a full-service design, and production company. Noffsinger, meanwhile, has been on the Executive Team of multiple start-ups. Three of these companies went on to see successful IPOs. He was also a former SOX Financial Expert and Audit Committee Chairman of a $2B NYSE-traded company.

Based on the data provided, Xcite appears to our team to be worthy of a “Top Deal” rating. The company has an impressive operating history. This is particularly true when you consider strong revenue growth and positive earnings and cash flow. It boasts significant clients across a wide spectrum of the sports industry, with additional revenue opportunities planned. The industry in which it operates is impeccable, with substantial growth forecasted for the years to come. So long as the firm continues to deliver quality content, it stands a good chance of maintaining a grip over the live entertainment space.

This does not mean that risks are non-existent, though. There is always the chance that the company might not fare well in the years to come. With significant investments being made in the gaming industry, staving off competitors will not come easy. The company should seek long-term contracts to help mitigate risk, but even that won’t protect it indefinitely. Another issue is the valuation. While probably appropriate given the circumstances, the higher the valuation is, the higher the chance of an eventual down round. Down rounds do create additional dilution for shareholders if they occur. Even for these risks, the picture for the business looks impressive. It is with a high level of conviction that we provide the company with its Top Deal rating.