The SNAPSHYFT team has been selected as a “Top Deal” by KingsCrowd. This distinction is reserved for deals selected into the top 10% of our due diligence funnel. If you have questions regarding our deal diligence and selection methodology please reach out to hello@kingscrowd.com.

Employment is a major economic and social metric that helps to determine the health of an economy. In recent years, one interesting shift that hasn’t gone unnoticed is the move from full-time employment by individuals to the ‘gig economy’. Gig workers are essentially independent contractors who perform short-term tasks. The gig economy presents a number of opportunities, but it also presents a number of problems for gig workers and companies alike. For gig workers, there are concerns about income security and work/life consistency. Companies that benefit from gig workers are doing well, but some industries that could benefit from them have not utilized them yet. Case-in-point, consider the food & beverage and the hospitality industries. This space, according to the BLS (Bureau of Labor Statistics) has the second-highest turnover of all major industries the Bureau covers at 78.6%. This rate is materially higher than the nationwide average of 45%, and it represents a five-year high reading. Add in the high cost associated with these industries replacing outgoing workers and bringing on gig workers could help. They can be instrumental in improving efficiencies and reducing costs for low-margin businesses.

SNAPSHYFT’s solution to the problems faced by workers and industry alike is simple and straightforward. The company’s app allows workers (what the company calls industry professionals) to build profiles and get matched up with jobs that are needed on an on-demand basis. As an example, this is how the process would work for a fast food establishment that needs a worker in an hour because one of its regular employees either quit or called off: That establishment would create a post stating how much it is willing to pay for the work and what the position is. A notification would then go out to industry professionals nearby who would qualify for the position.

According to management, jobs posted on the company’s system boast a 92% fulfillment rate. Workers, on average, receive about 50% more than they do through regular employment at comparable firms. In addition, SNAPSHYFT said that the turnaround time between when a notification goes out and the time a position is physically filled can be as little as 30 minutes. This fast turnaround time is excellent for the firms using the service.

While SNAPSHYFT’s core value proposition is interesting all on its own, the company’s business model has further complexity. For instance, workers may be compensated as quickly as 30 minutes after their post ends, and SNAPSHYFT handles the digital banking side of the transaction. They also offer tax withholding, retirement options, health insurance, and even telemed services.

To fund operations, the company charges a booking fee for each position filled, which is billed to the business. The gig worker never has to pay a dime. Subscriptions are also offered to the companies that utilize SNAPSHYFT. The first of these is a free option with limited functionality and the ability to post up to five positions per month. They also have three premium plans, with pricing ranging from $15 per location per month to $146 per location per month.

This business model has proven attractive for customers and businesses alike. Through 2019, the company attracted more than 32,000 industry professionals on its platform. It has also seen more than 400 companies utilize its service. The business boasts a 97% retention rate, which is incredibly high when you consider the transitory nature of the field.

We have already discussed high turnover in the food & beverage and the hospitality industries. However, that’s just the tip of the iceberg. The potential for gig workers in those spaces is significant in size, but they represent just a piece of the overall market for temp and contract workers. The total market in the US for the temp and contract worker space was estimated by one source to total $153.5 billion last year. That figure is expected to grow to $157.8 billion this year. The annualized growth rate in this space is pegged at 4.1%. 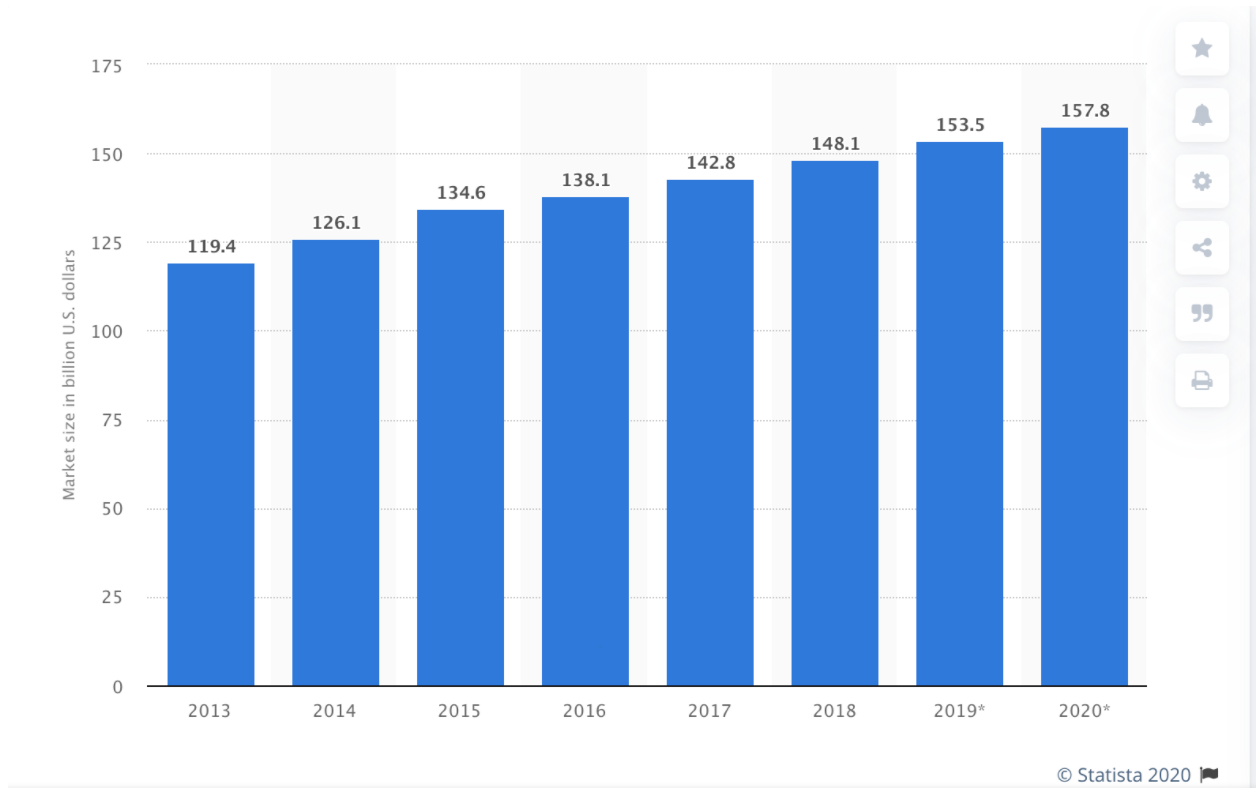 While the US seems to be the largest market for gig workers, it’s far from the only one. In fact, a surprisingly small piece of the country’s workforce falls under this designation. According to the OECD, only about 4% of American workers are temporary in nature, which is towards the low end of OECD nations. The average for the group is a hefty 11.7%, with countries like Canada, Spain, and Colombia at 13.3%, 26.8%, and 28.8% respectively. There is, then, a massive opportunity for the company and its shareholders when discussing prospects abroad. One source estimates that the global market for temp and contract workers was about $463.1 billion in 2019. A different source pegs this number even higher at $491 billion, while estimating the US a bit smaller at $144.5 billion. No matter how you stack it, though, these are robust figures to consider.

In order to continue growing the business, management has elected to issue some equity into the firm. They are doing this in the form of common stock that investors can buy. The price per share has been set at $0.41, with a minimum commitment per participant set at $99.22. In all, the firm is hoping to raise $1.07 million, but it can close a round with as little as $10,000. Management has assigned a pre-money valuation on the business of $5.071 million.

At the pinnacle of SNAPSHYFT are its two founders: Thor Wood and Stephanie Corliss. Wood is currently serving as the company’s CEO. His past experience includes being an owner of WTW Solutions Group, a company working in the freight brokerage industry. Another company he worked at in this space was N+FOB. Before any of this, he worked as a Commission Representative at the Indiana State Athletic Commission. Corliss, meanwhile, serves as SNAPSHYFT’s COO. She has worked as a Contract CFO for Friends of Foster Children Forever. She was also a Director of Finance and Business Development in the publishing industry.

SNAPSHYFT has been rated a Top Deal by our team. The company’s business model is fascinating, and its traction so far is impressive. The idea of tackling the gig economy while simultaneously addressing the high churn in the food & beverage and the hospitality markets is common sense. It’s also brilliant at the same time. The idea of not charging the workers and instead charging a modest fee of the businesses makes a lot of sense. Add in the extra features the company offers and it’s hard to see why this concept should not grow nicely. In fact, it’s more challenging to understand why it hasn’t grown beyond more than just 400 establishments yet. Although SNAPSHYFT still has to overcome the usual hurdles of revenue that every early business faces, the company’s straightforward approach to addressing the needs of the growing gig economy makes it a promising proposition for investors to watch.