The Vegan Fine Foods team has been selected as a “Top Deal” by KingsCrowd. This distinction is reserved for deals selected into the top 10% of our due diligence funnel. If you have questions regarding our deal diligence and selection methodology, please reach out to hello@kingscrowd.com.

Whether for religious, health, or environmental reasons, or just pure preference, veganism appeals to millions of Americans. Specifically, a study by The Vegetarian Times showed that 3.2 percent of U.S. adults, or 7.3 million people, follow a vegetarian-based diet.

Approximately 0.5 percent, or 1 million, of those are vegans, who consume no animal products at all. In addition, 10 percent of U.S. adults, or 22.8 million people, say they largely follow a vegetarian-inclined diet.’ And the diet is most common in young people, foreshadowing a growth trend rather than a fad. 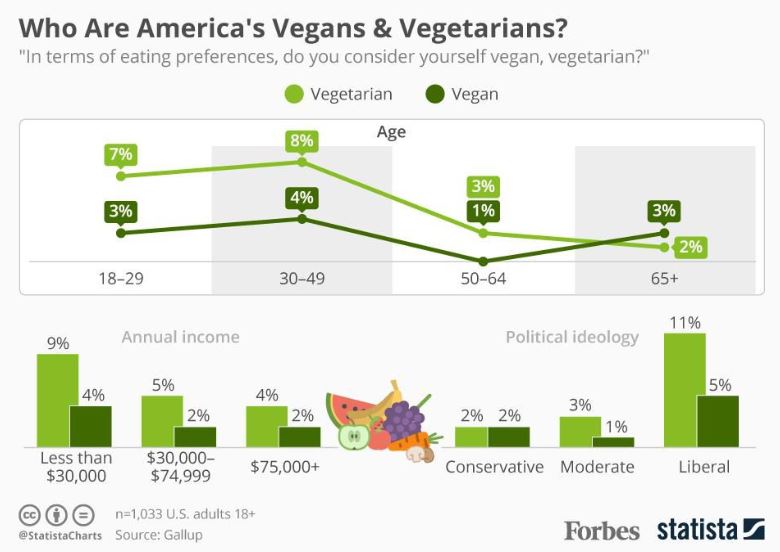 As these numbers grow, the market responds. Forbes reports “across the United States, there are increasing numbers of vegan and vegetarian restaurants while most supermarkets usually offer alternatives to meat and dairy products on their shelves. The number of social media communities catering to vegetarians and vegans has also ballooned.”

Veganism has for many become less of a diet and more of a lifestyle— a healthier, more environmentally conscious way of living.

Though supermarkets tend to offer meatless alternatives, there exists no single supermarket chain unique to the needs of vegans and other individuals that eat primarily plant-based diets in the U.S.  Without these options, many strict vegans are forced to store-hop to find all the products they need in one grocery trip.

Vegan Fine Foods faces little direct competition. Of course, as veganism grows as a trend, specialty stores will continue to service demand and include more meatless products. But these franchises, Trader Joe’s for example, do not market themselves as vegan supermarkets. In fact, they are far from it. And though they may offer more niche options for a plant-based diet, they do not tailor to the needs of vegans specifically.

However, Vegan Fine Foods, though designed for vegans, is not restricted to vegan customers. In fact, Vegan Fine Foods reports that over 50% of their customer base is not vegan or vegetarian, rather “occasional plant-based eaters” aka “flexitarians” that are simply curious.  On the one hand, this proves Vegan Fine Foods to be a welcoming environment, attractive to people practicing all kinds of diets.

On the other, it makes specialty stores like Trader Joes and Whole Foods much more serious competition if over half of the customer base is not necessarily restricted to a vegan diet.

The timing to enter this market, however, could not be more optimal. As the vegan population increases, as does the market for vegan foods. In fact, “the global vegan food market value is estimated to reach around USD 24.3 billion by 2026 and will grow at CAGR above 9.1% over the forecast time frame.” This comes with an increasingly publicized awareness of how the animal products we eat affect our health and our environment at a time when global warming is a touchstone topic in politics.

Prior to founding Vegan Fine Foods, Steven Smith founded Vegan Worldwide, which exports vegan foods from the U.S. to overseas markets. Vegan Worldwide is still in operation and is currently the leading exporter of vegan foods from the U.S. Prior to that he spent time at both Procter & Gamble and PepsiCo. He holds a Ph.D. in Strategic Management from Rutgers University. Smith is a vegan himself and understands the pain points of his customers in shopping for high quality, plant-based foods.

In addition, the team plans to launch an e-commerce platform. Since much of their marketing is done via social media, an online marketplace seemed a natural, in demand, next step.

Finally, Vegan Fine Foods has already started to roll out a private-label, “Vegan Fine,” beginning with wine, and plans to expand in the coming years.

1. Market Timing: The Economist named 2019 “The Year of the Vegan,” suggesting that 2019 will be the year that veganism goes mainstream. Not only are the health benefits of plant-based diets becoming more publicized, consuming less animal products “reduc(es) the environmental hoofprint of animal husbandry and perhaps even cut(s) the cost of food in poor countries.”

From an environmental and social impact standpoint, vegan products are only going to increase in demand and popularity. In addition, veganism has proven to be most popular amongst younger Americans, suggesting that the trend is just now ramping up and has the potential to stick around, perhaps less out of preference and more out of necessity.

3. Early Traction and Impressive Growth Model: With $1.2M in revenue and 35K customers served, Vegan Fine Foods has proven the need for a vegan-specific grocery chain. The first of its kind in the U.S., Vegan Fine Foods is set up for success with its growing customer base and plans for expansion, including a new ecommerce platform and private-label, something that makes competition like Trader Joe’s so appealing.

Vegan Fine Foods is a Top Deal. The strong team of entrepreneurs has identified a pain point in a fast-growing market trend. However, some of the early success stories in this market, including Veganz, the previously mentioned European chain, have begun to lose traction, citing simple supply and demand economics along with smaller competitors as reasons for closing multiple branches.

In order to be successful and retain customers that would otherwise shop at more universal, less vegan-centric specialty stores, Vegan Fine Foods needs to stick to it’s strong growth plan. Specifically, it’s plan to roll out an e-commerce platform and expand its private label. The strategy has worked well for competition like Trader Joe’s. Not only do private-label products attract loyalty in a customer base, they cut costs by eliminating the middleman, buying straight from the supplier, ultimately leading to cheaper prices overall.

Finally, exits in this market are quite promising. Beyond Meat, a plant-based meat substitute company was valued at $1.5B at IPO in May of 2019 and had the “biggest-popping U.S. IPO since 2000.”

Whole Foods Market was acquired by Amazon for $13.7B in 2017, proving large acquisitions, even IPOs are possible, if not common in this growing market.

Olivia holds a Bachelor's degree in Neuroscience from Wellesley College with a minor in English. Previously, she spent time at Glasswing Ventures, an AI-focused venture capital firm in Boston, where she helped develop machine learning algorithms for the opportunity qualification of startup companies.