The Beast Brands team has been selected as a “Top Deal” by KingsCrowd. This distinction is reserved for deals selected into the top 10% of our due diligence funnel. If you have questions regarding our deal diligence and selection methodology please reach out to hello@kingscrowd.com.

A growing trend, not only in the US but internationally, is for men, particularly younger men, to focus more on grooming and adult beauty care products. This has, in recent decades, created a multi-billion dollar industry, but as the trend grows, so too does the opportunity in this space.  Here is where Beat Brands steps in.

There is, in this era, a movement toward what Beast Brands calls “grownup grooming”.  What was once thought of to be the domain of women, beauty products have come to find an audience of young men waiting for the right fit for them.

Ranging from shampoo, to soap, to deodorant, and more, the industry has found a growth opportunity here, but while women have a particular range of tastes, men have a different set of interests altogether different.

Right around 40% of young adult men, for instance, have come to be interested in gender-neutral beauty products, but that still leaves around 60% who are seeking for a particular niche.

To address this market need, the management team at Beast Brands has risen to the challenge.  Recognizing the opportunity here, the company has created a portfolio of more than 50 SKUs (shelf-keeping units) of men’s grooming products, aimed largely at those turning 30.

Their goal: to instill confidence and to empower men to “groom boldly”.  This is best achieved, the company believes, by offering a variety of products that fit in the premium market, but are still relatively low-priced, and that give off a masculine sensation. 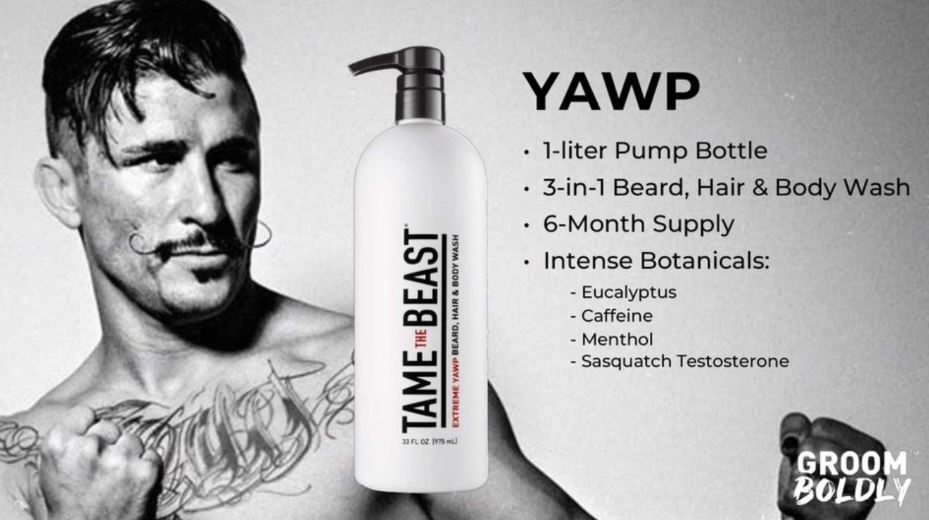 Perhaps the best example here is the company’s 1-Liter pump bottle, 3-in-1 beard, hair and body wash.  Under the name “Tame The Beast”, the product seeks immediately to inspire a masculine feel, but it doesn’t stop there.

The product includes botanicals like eucalyptus, caffeine, menthol, and what the firm calls “sasquatch testosterone”.  Not only does the smell and feel supposedly match the company’s definition of what it means to be masculine, it comes in at a price point of $34.99, well-below the $50 to nearly $70 that select competitors sell similar offerings for.

On its website, the company shows this product scoring roughly 5 stars from customers reviewing it, but on Amazon (with a smaller number of reviews), the product received a slightly lower rating of 4.2 stars out of 5, while its 16fl oz equivalent received 3.7 stars (the difference, according to the reviews, largely being chalked up to the smaller package’s pump sometimes not working). 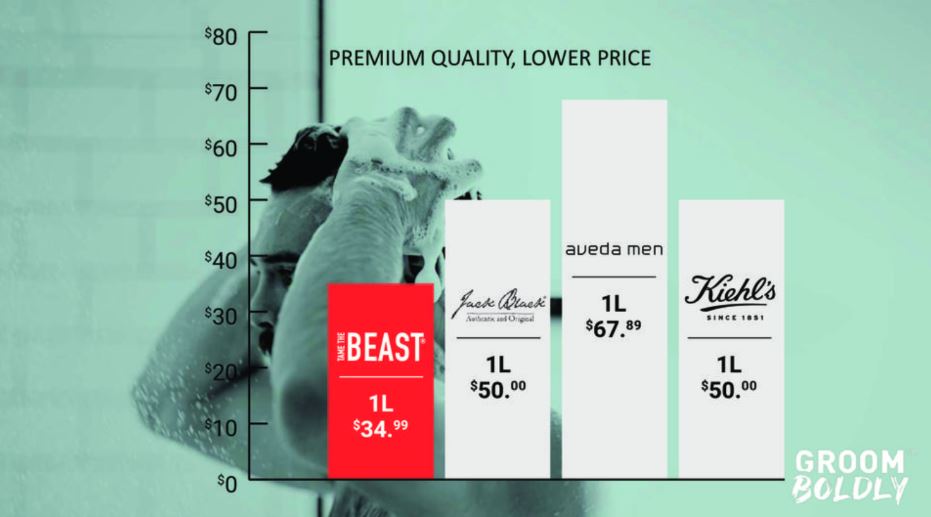 As has already been mentioned, hair and body wash isn’t the only product under the Beast Brands name.  A survey of their website lists items like bars of soap, shaving cream, “Beast Balls” (deodorizing balls that can be placed in a locker, golf bag, or elsewhere, and, yes, the firm’s signature “Nutt Butter”.  As might be imagined, the company’s Nutt Butter is targeted for, well, you probably already guessed it.

For now, Beast Brands has been focused on its DTC (direct-to-consumer) business.  According to management, it has a 48% customer retention rate on its website and it’s seeing roughly 1,000 new customers buy its products every month.  What’s more, 25% of the revenue on its website is recurring (set up via subscription).

The results, so far, have been impressive.  Unlike many startups, which either have no revenue or just a little of it, Beast Brands has boasted over $100,000 in revenue per month. Over the TTM (trailing twelve month) period, revenue has exceeded $1 million just by utilizing its B2C, customer-centric approach.

Moving forward, management has high expectations for the brand.  Through a five-phase program, the company hopes to reach for $400,000 in monthly revenue with 50,000 customers compared to the 13,000 they have today. These phases are loosely stated, but the key points center around the firm not only improving their customer experience, but also cross-selling existing products while launching a high-end, retail-focused offering called Beast Black.

In addition, the company hopes to sell a re-usable, stainless steel pump that will achieve their corporate goal of being environmentally friendly while transforming their relationship with customers from one where they sell hair and body wash to one where consumers view it as a subscription ready to be filled.

While $400,000 in monthly revenue will put the company on its way toward achieving annual run-rate sales of $5 million, the hoped-for upside doesn’t stop there.  They believe that by 2022 they can be generating in excess of $25 million per year in sales, and if that is accomplished then the firm would be looking for an exit.  They have identified a realistic exit as occurring between $25 million in revenue and $100 million, though what this would mean in terms of valuation is challenging to predict.

By 2022, Allied Market Research predicts that the men’s personal care market will achieve a size of $166 billion. More niche in this space is a category known as men’s toiletries, which appears to be where Beast Brands plays. One source, Hexa Research, suggests that in 2017, this market was $19.2 billion in size, but that with a 4.52% CAGR, it should grow to about $27.4 billion by 2025.

The largest sub-category here, as the image below indicates, will be skin care, which is expected to jump from $7.5 billion to $11.2 billion, while hair care will come in second, rising from $6.2 billion to $8.4 billion over the same period of time. Most of this growth is expected to take place in dedicated health and beauty shops, with sales there expanding from $7.8 billion to $11.4 billion, but the 4.86% CAGR for online sales is impressive as well. 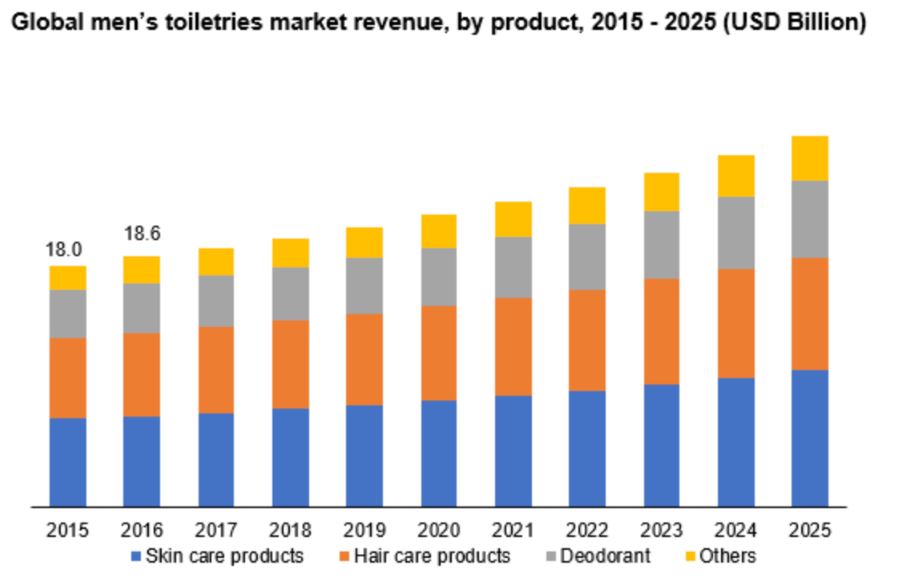 Estimates, sadly, are difficult to pin down.  Another source, for instance, indicated that in 2018 the global market was about $25 billion in size, and that by 2024 it should rise to about $30 billion, representing a CAGR of 3.2%.  Either way, the conclusions are substantially the same: this market is decent in size and is demonstrating growth that far outpaces population growth, which means that the adoption rate among the members of society today and tomorrow alike is indicative of a growing trend.

Unlike some transactions in the startup space that deal in straight-up equity, Beast Brands has decided to make this deal a little more complicated.  In exchange for an investment (subject to a per-investor minimum of $1,000), investors will receive a crowd note.

This note will bear a 5% annual interest rate, cover a period of 24 months, and when it converts into equity will be subject to a $5 million valuation cap and taking into consideration a 20% discount.

The way the discount works is as follows: if Beast Brands were to raise capital in the future at a $5 million valuation, investors holding the notes would receive equity in the firm as if the company were worth 20% less or, in this case, at a valuation of $4 million.

Although Beast Brands has a sizable team of at least 8 individuals, excluding mentors and advisors, the two key figures behind it are John Cascarano and Jay Wilkison.  Cascarano, the firm’s founder, CEO and President, received his Bachelor’s degree at Duke University, where he was a key member of the founding team of Mental Floss, Inc.

He eventually went on to law school at the University of Michigan, after which he practiced in the field for about 5 years, before returning to startup life. Cascarano then built the online beauty product retailer Lock & Mane, which he grew to eight-figure sales on an annualized basis and then sold in 2015 for an undisclosed sum. He has also served as E-Commerce Director for ABLE, a women’s apparel and accessories retailer based in Nashville.

Wilkison, meanwhile, is the former Director of Wholesale of premium jeans brand imogene + willie. He is also an actor in his spare time, having appeared on shows such as Younger, Nashville, Law & Order, Rent on Broadway, and more.

This was a tough deal to assess, but at the end of the day we rated it a Top Deal.  Working against the company in our view is the fact that the business has had large and growing net losses and operating cash outflows between 2017 and 2018, plus the fact that it operates in a competitive space where establishing a value proposition with customers is necessary in order to succeed.

On the other side of the coin, though, you have a firm whose sales more than quadrupled year-over-year and that already has over 50 SKUs under its belt.  Add in Cascarano’s experience in the space already, the fact that the firm is adding 1,000 new customers per month, the impressive customer retention rate on its website, and the market’s dynamics, and it’s difficult not to like what’s here.

Better yet, in recent years we have seen male-grooming companies go on to be acquired for exorbitant sums. Take Harry’s, the shaving club company that sold to Schick for $1.37B in May of this year or Walker & Company, which sold to P&G for $20M to $40M in 2016 or Dollar Shave Club that sold for $1B to Unilever.

With male grooming product demand growing so quickly amongst the younger male demographic, CPG (consumer packaged goods) companies are running to acquire companies in the space as they desperately look to identify avenues for growth in their product portfolios, which are relatively stagnant.

It’s not often that new CPG categories are created overnight and while male grooming products aren’t a new category per se, there has never been an emphasis or focus on the category because males have historically shown disinterest in buying these products. With this renaissance now occurring, it really has created a new product category demand that has been underserved for many years.

No, the company is not some high-flying technology company, and the chance of it becoming valued as such is small (though Dollar Shave Club and Harry’s are examples that a sky high valuation could occur)l, but the sales range at which an exit is being looked at appears realistic.  At that point, the upside for investors should be attractive and at the rate at which revenue is expanding, it could be just a few years before the company hits the mark.

Risks do certainly exist, particularly with regards to the losses it has incurred and will likely continue to incur for the foreseeable future, but that’s part of the game when a business is capturing strong revenue expansion.

Given the firm’s positioning as a premium brand, management probably can help to offset some of these issues through a price hike in some of its product lines, and while the customer retention rate would probably decline in response, it would probably remain high enough to help push sales higher so long as management doesn’t overdo it.  In all, we feel this is an attractive prospect for investors to consider and that the risk, relative to the reward, is tilted in their favor.