Oodles Corporation has been selected as an “Underweighted Deal” by KingsCrowd. This distinction is reserved for deals not selected into the top 10%-20% of our due diligence funnel. If you have questions regarding our deal diligence and selection methodology, please reach out to hello@kingscrowd.com.

The internet has gone a long way toward making the world a smaller place. By placing everything you need at your fingertips, it has become possible to get what you want and usually at the price you want it. The largest benefactors of this paradigm shift were two types of organizations. These were companies that were capable of growing large consumer bases, and those that already had them entrenched. For the small, local business though, the internet has been a mixed bag. For some players, it has served as a death knell. For others, it has been a saving grace. For the companies that have missed out on this transition, one company, Oodles Corporation, hopes to help. It’s doing this by taking one of the most attractive consumer microcosms in the US and catering to its tech-savvy nature and budget-conscious sensibilities.

There are two issues that Oodles Corporation seems to be addressing. The first is providing local businesses with improved revenue opportunities. The second is delivering cash-saving deals to college students. In the first case, the company is focused on driving demand to all things local. In the second case, the firm is helping to promote social activities among college students and at a price they can afford.

Oodles Corporation, through its OodlesDeals app, is on a mission. When users sign up for the service, they can search for deals from businesses near them. The initial target is the budget-conscious college community whose members are looking for discounts on local grub. Since its launch in 2017, the app has seen more than 26,000 students join its platform. This is spread across only eight universities. This approach, launching at one university at a time, is logical because it allows the company to first onboard local restaurants.

In the first couple of years, the results for the firm were anything but impressive. Revenue in 2017 totaled only $467, while the firm’s net loss was $88,470. In 2018, sales grew, but to a paltry $9,301. Over the same timeframe, the company’s net loss grew to $161,565, while its operating cash flows were a net negative of $157,321. At that time, though, the company had only four universities onboarded. By 2019, the picture started improving. Total financial figures have not been released for the year. But the company stated that in the three months leading up to October, revenue averaged $5,000 per month. On an annualized basis, this would translate to sales of $60,000, while its annualized net loss would have been $372,000. 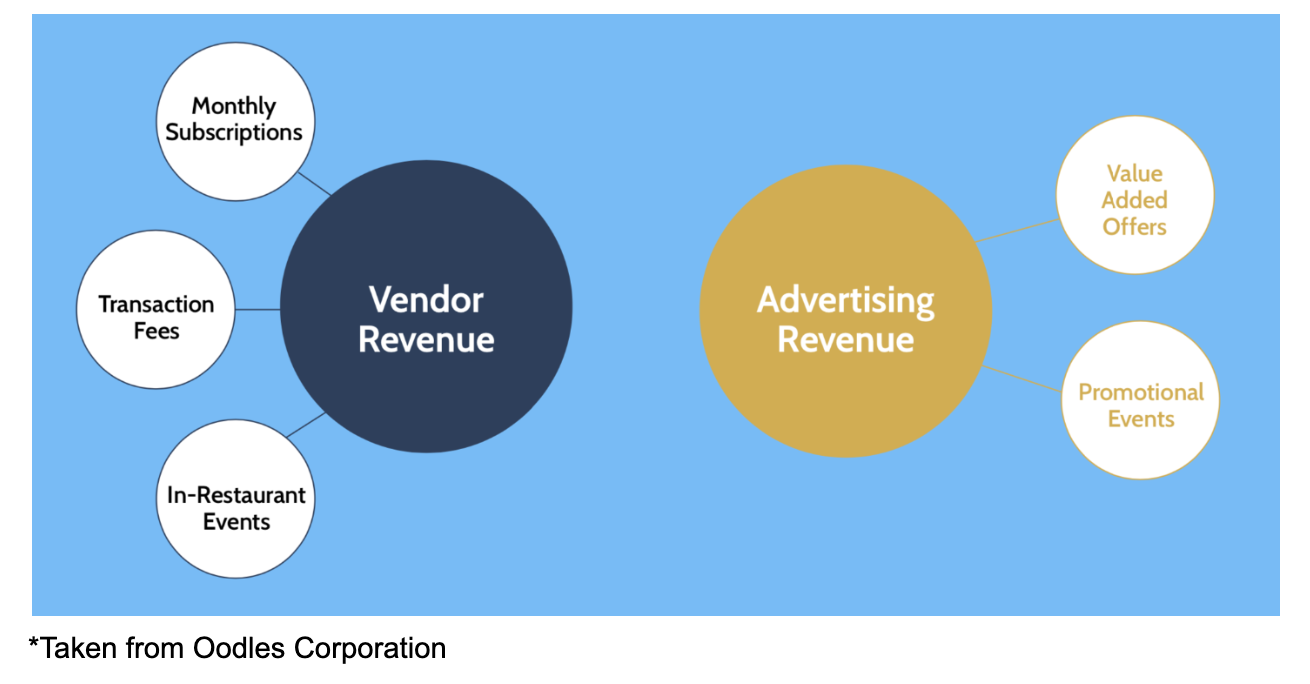 According to management, there are a few ways the company can generate revenue. While it does not charge the students who use it, it can generate revenue from advertising to them. In addition, it charges monthly marketing service fees and per-transaction charges to companies offering deals on its app. The company also charges for events executed on their vendors’ behalf. Moving forward, management has highlighted the possibility of generating revenue off of subscriptions. In time, the company wants to expand outside of the restaurant space. Examples of other verticals include retailers, movie theaters, putt-putt golf courses, and more.

Management has high hopes for the firm. They believe that by expanding further, they can generate revenue of $750,000 during their 2020 fiscal year. This does, of course, require funding. Management stated that the average cost to expand to a university is about $10,000. This could change materially from campus-to-campus, though, because it’s inclusive of a cost of $2 per student on the recruitment side. 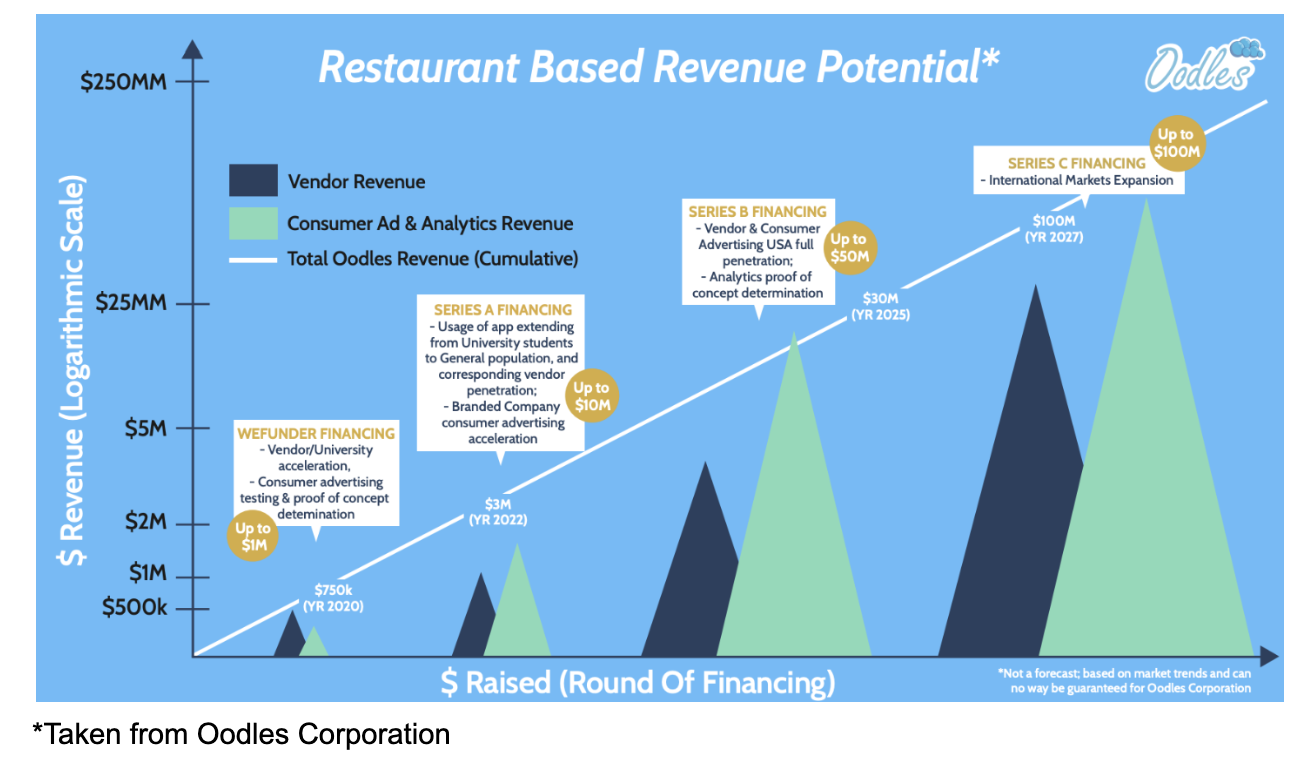 Though projections are rosy, it’s hard to reconcile those figures with what has already been generated. The company’s goal is to reach 100,000 students by the end of 2021 by expanding to 14 universities from the eight they have today. Even with current monetization data, the math doesn’t work out. This is, of course, unless the company is banking on other revenue opportunities that it hasn’t launched. This could make up the difference, but management has not revealed any real details about this front. Even if the firm does achieve this growth, the net losses already being incurred are painful. Assuming these continue, the company will likely have to raise significantly more capital. This, in turn, could lead to shareholder dilution.

An Interesting, but Opaque Market

It’s difficult to define precisely what market Oodles operates in. There really isn’t a ‘college student restaurant deals’ industry. Significant time researching variations of these themes revealed essentially no results. This, then, required a different way of thinking. As the image below illustrates, from the end of June last year through the end of October, the number of users on its platform grew from 20,000 to 25,000. That works out to about 1,250 additional students being added every month. It also implies an average in the three months before October of 22,500 students. The company also claimed that it generated an average of $5,000 per month in sales during that time frame. In all, this comes out to $0.22 per student per month or $2.64 in ARPU (average revenue per user) per year.

Assuming that these numbers are consistent, consider the next image below. In it, you can see that the number of students in the US that are enrolled in public and private colleges totaled 19.91 million in 2019. If we restrict the analysis strictly to the US, that implies a total addressable market value of $52.56 million per year. 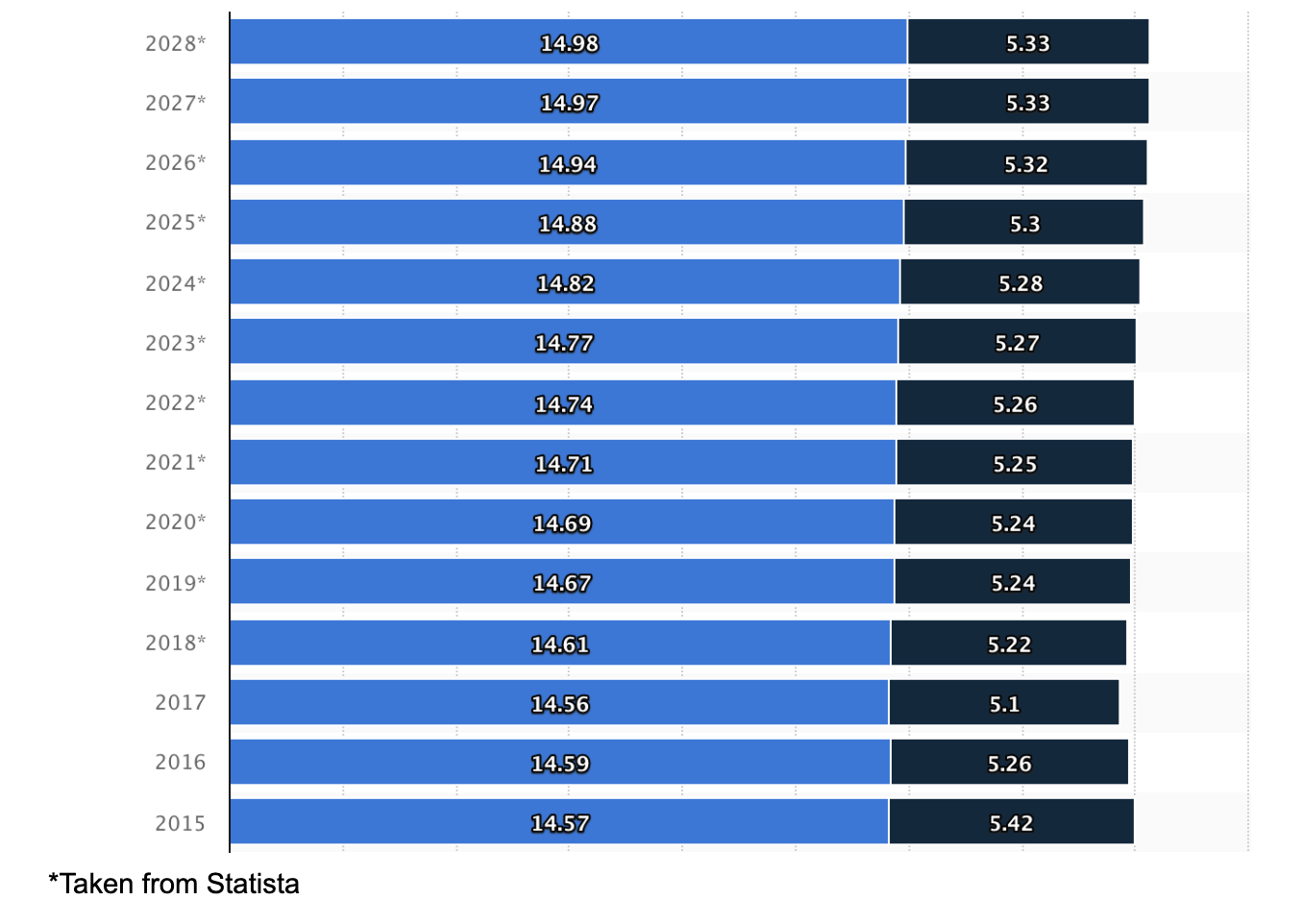 This figure very well could be higher or lower. What actually transpires ultimately comes down to two factors: market penetration and ARPU. If ARPU were to grow to $5, for instance, revenue might expand up to $99.55 million, while at $10, it would be $199.10 million. ARPU expansion is certainly typical in most firms as they grow. This does, however, look at a best-of-all-cases scenario. No company has 100% market penetration. Even hitting 10% of the students in the US would be a remarkable achievement. That, then, would imply revenue of between $5.26 million and $19.91 million each year.

The bottom line here is that the market opportunity for the firm is fairly small. One could make the case that when the company begins expanding internationally, this will open further growth. That is possible, but will that growth be worth it? Different markets have different opportunities. Take Facebook, the king of social platforms, as an example. In 2018, its annual ARPU worldwide was $24.96. This figure was wildly different depending on where in the world we are talking about though. In the US, the figure was an impressive $111.97. In Europe, which is arguably just as developed as the US, ARPU was considerably lower at $36.66. In Asia/Pacific, it was $10.71, while in the rest of the world it averaged $7.52. Unless Oodles can capture sufficient ARPU abroad, the prospects may not be worth it.

Like many companies taking the crowd raise route, Oodles has decided to issue SAFEs instead of equity. The company is issuing out SAFEs that will convert at the next capital raise, subject to a valuation cap of $10 million. The minimum amount of capital required per participant is $1,000. Holders of the SAFE get to convert at the company’s value, subject to the cap, and after taking into account a 20% discount on the firm’s future price. Investors representing the first $200,000 committed will see that valuation cap set at only $7.5 million. Management is trying to raise at least $50,000, but its preferred target is $1.07 million. As of this writing, it has only $26,192 committed to its cause.

At the core of Oodles Corporation are its two co-founders: Sajal Sahay and Asheesh Barman. Sahay is the company’s CEO. He has experience in leadership & marketing experience in B2C & B2B businesses totaling around 25 yrs. Prior to founding Oodles, he worked as the Head of Marketing at Twin Prime, a Salesforce company. Before that, he was an SVP at Fairchild. He also held the position of VP of Marketing at both Mobilisafe and HP at one point in time. Sahay has an MBA from IESE Business School and a BA from the University of Chicago. Fellow co-founder Barman is the firm’s President and COO. He advertises himself as an expert at B2B Customer development. He also claims to have over 20 years of business development experience in B2B and retail. His prior experience includes as the EVP and later as the CIO of Acutrack, where he worked a combined 16 years. Before that, he served on the board for Kutunga, a socially-conscious digital video marketplace for content creators, consumers, and causes. He has a BSc from Johns Hopkins University.

After careful consideration, Oodles has been rated an “Underweight” deal. The company has an interesting concept and if it can continue to grow the brand then it could be on to something. Having said that, there are a number of challenging issues for investors to grapple with. For starters, the industry the firm operates in is opaque and really not all that large. Any one player could come to dominate the space, leaving little room for competition. Another issue relates to the company’s growth and targets.

Growth through 2018 was not awe-inspiring, to say the least. And the significant net losses generated by the business during that time (and likely through 2019) are not a good sign. Some early losses are expected, but not amounts that represent several times the firm’s revenue. In addition, unless the company sees considerable ARPU growth, its own revenue targets, when placed beside its user growth expectations, don’t add up. ARPU growth could occur and it could be material, but to speculate on that is discouraging. There’s also the prospect of competition from other deal websites. Though not structured the same way Oodles is, there are plenty of sites and apps that promote deals. In all, these issues are enough to cause concern over the viability of the company long-term.