The LYFETYMES team has been selected as a “Underweighted Deal” by KingsCrowd. This distinction is reserved for deals not selected into the top 10%-20% of our due diligence funnel. If you have questions regarding our deal diligence and selection methodology, please reach out to hello@kingscrowd.com.

Parties and other events like them are a big business in the United States. Hundreds of millions of events, ranging from birthdays and weddings, to holiday specials, take place in this country every year. In the process, hundreds of billions of dollars are spent and countless hours are allocated toward planning and execution. Katie Cunningham recognized this trend and to capitalize on it, created LYFETYMES. Her company serves as a one-stop-shop for the hardworking individuals (mostly moms) who plan multiple events every year.

Dedicated event-planning apps and websites are a dime-a-dozen. According to LYFETYMES, though, the industry is lacking a one-stop-shop. As the image below illustrates, many of the competitors on the market fall into one or more niche categories. These range from end-to-end solutions that focus on only one thing (like weddings), to event space and ticketing events, and more. One could argue that Facebook can operate in the capacity that LYFETYMES seeks to.  This is true, but it’s not a platform dedicated only to planning and executing miscellaneous events, but rather a catch-all of social activity. 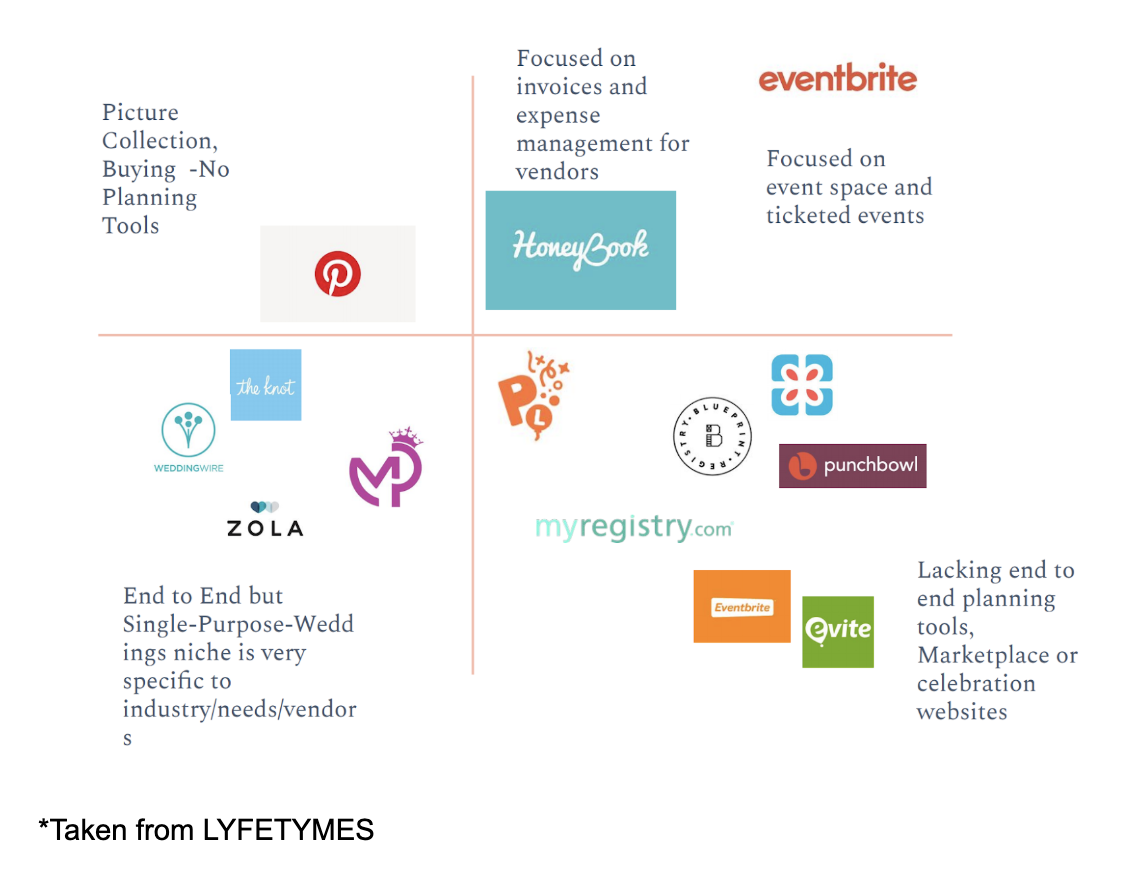 To address the industry’s shortcomings, Katie Cunningham and her partners created LYFETYMES. The company’s website focuses on providing users with all of the tools and data they need to create and share events. In the image below, you can see a list of the actions the firm’s website is capable of performing already. These range from creating simple and free websites for a user’s events, to allowing users to connect with vendors to service their events.

From a monetization perspective, LYFETYMES is fairly simple. The company does allow its users on for free, but it does plan to make money off of selling different products and services through its online store. The company also intends to generate revenue through advertising and premium placements.  It also intends to invite in subscription partners on its two-sided marketplace. Management’s goal, by 2021, is to see 150,000 events planned on its service every month. With an ARPU (average revenue per user) of $30 per year, the firm hopes to see annual revenue by then of $56 million. 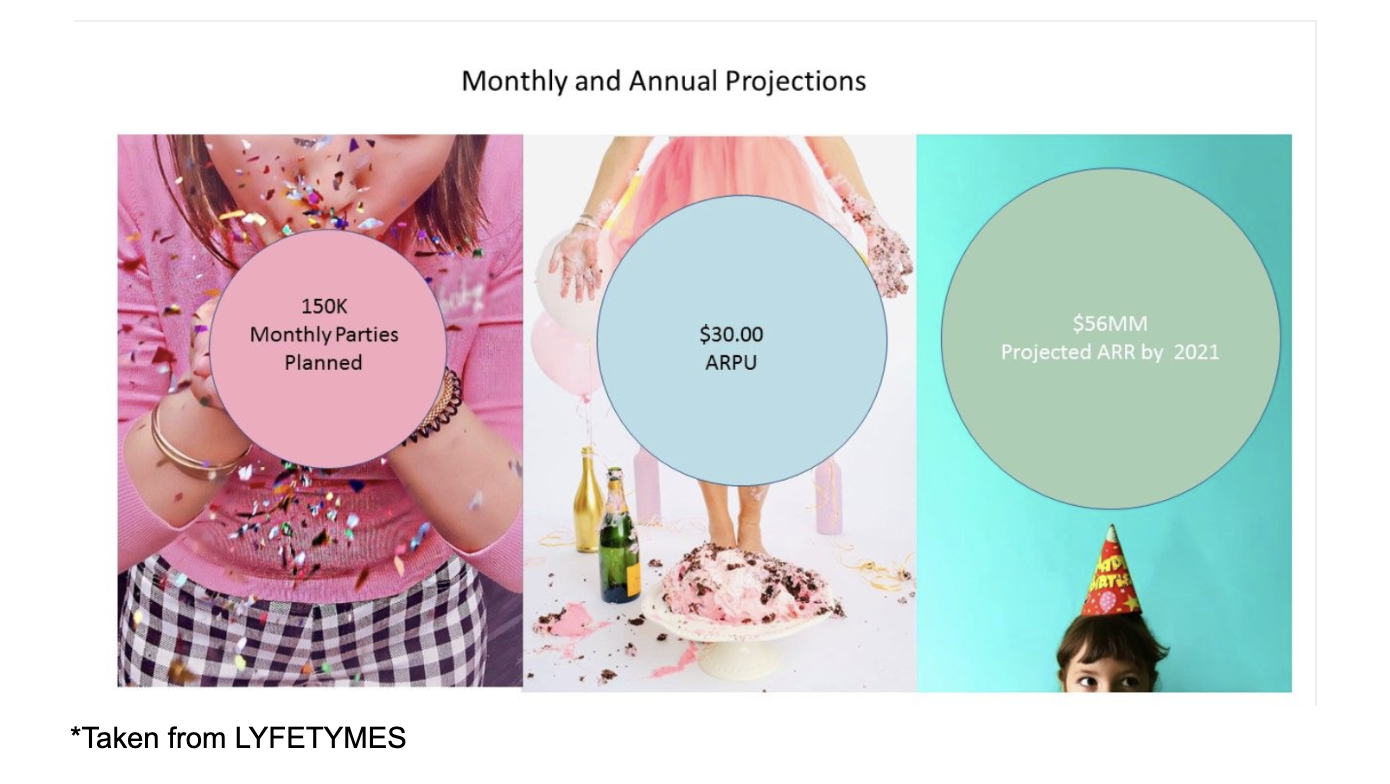 Before we move on, it’s worth noting that with the data we have available, management’s figures seem off. For starters, 150,000 x 12 x $30 comes out to $54 million, not $56 million. Second, there are issues over precisely what they mean by ARPU. Laid out the way it is above, it’s actually assuming a figure you would refer to as ARPE (average revenue per event). While the number of events may be very heavily influenced by user count, they are still very different things. For instance, according to LYFETYMES, moms plan an average of four celebrations every year. This would mean that the 150,000 figure would be based on 450,000 users, each one using the service for four events annually. This would translate to annual ARPU of $120 (or $10 per month) if the $54 million target is accurate. If the $56 million target stated by management is correct, this rises to $124.44 (or $10.37 per month). In short, management is either off in their numbers, their methodology, or both. Any way you slice it, it’s not awe-inspiring for a company whose CEO and Founder had over 20 years of experience in banking and finance roles.

Another issue regarding LYFETYMES is that management has been vague in some areas. In their advertising documents, the firm touted 400% month-over-month user growth.  It also boasted 15 million impressions on Pinterest in a 90-day window and more than 350,000 engagements . It supposedly received these results without any paid advertising too. These numbers are particularly impressive, but they don’t tell us how big the platform truly is. How many registered users does it have? How many MAUs (monthly active users) are on it? What kind of engagement is seen? Management has not provided any insight to these figures, and that’s precisely what will determine the platform’s growth over time.

What’s perhaps more depressing than this opacity is the fact that the company has yet to generate any revenue. In the three months ending in October of 2019, the company generated nothing in revenue and had no expenses. In 2018, the firm generated a net loss, but then too it had nothing in sales. Providing a service for free to users is perfectly fine. In fact, it’s an excellent way to grow. However, the company should be generating some revenue by now, even if that means advertising revenue.

To say that a one-stop-shop for event planning has opportunity is an understatement. There is no single ‘events’ industry, so to best understand this space, we need to look at a wide array of activities celebrated in the US. Fortunately, the NRF (National Retail Federation) keeps some data available for the public. In the image below, you can see some relevant figures regarding specific holidays. 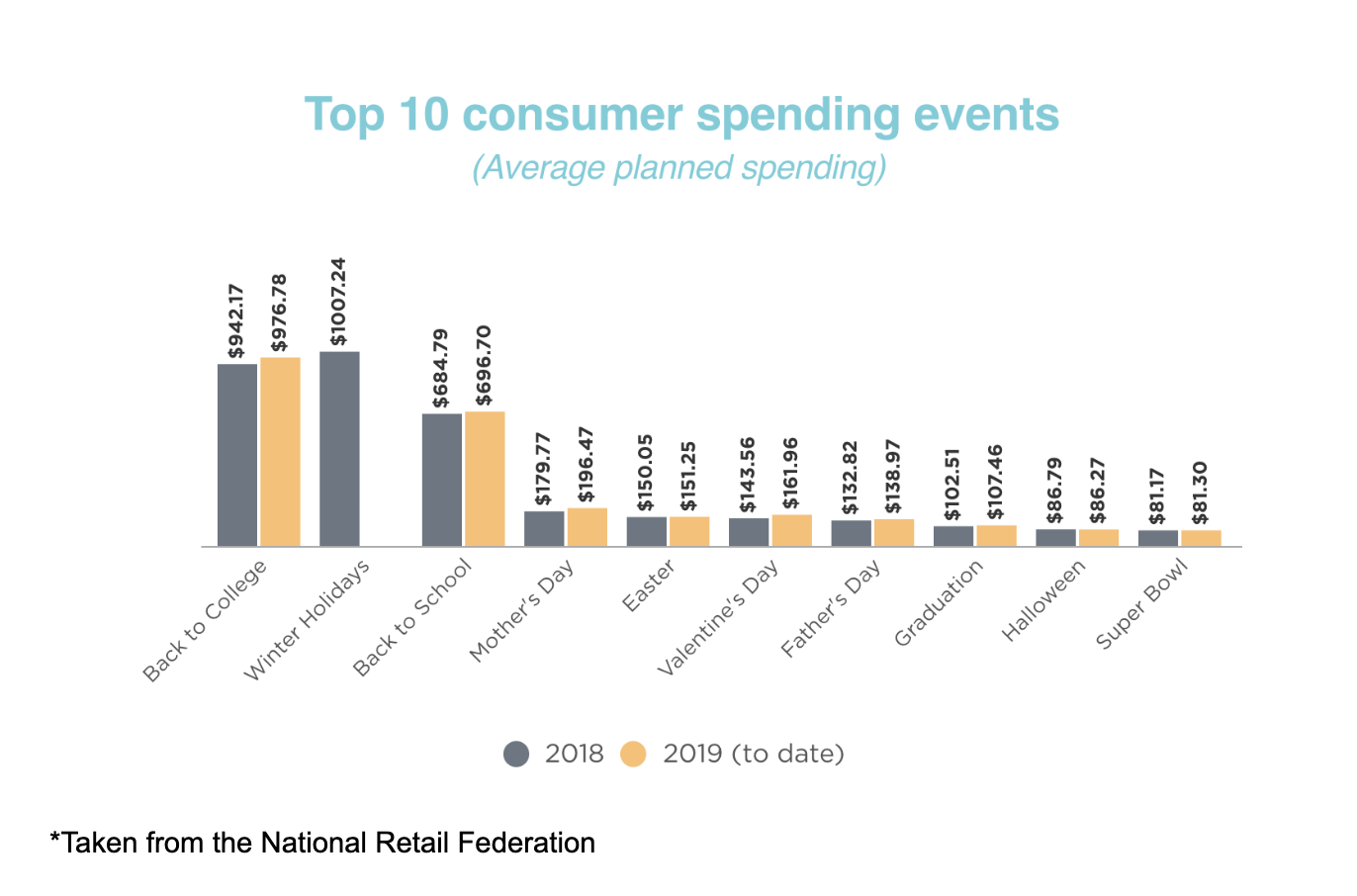 Weddings are also a big opportunity. Each year, 2.3 million couples get married in the US. This works out to around 6,200 per day. Total spending this year is expected to be $72 billion. Another major event is the Super Bowl, where 182.5 million viewers will spend an aggregate of $14.8 billion,.  Back-to-school celebrations represent an opportunity worth $80.7 billion as well. This last figure excludes the $5.5 billion that will be allocated toward graduation spending.

These disparate events, especially once you throw in the couple hundred million birthday parties celebrated each year, add up to big money on the line. Setting up a platform to cater to these events and more definitely creates an opportunity. Of course, execution risk cannot be ignored.  Even a great idea executed poorly can fall to the competition. Until management can prove out the business model further, namely by generating some revenue and getting a stated number of users on board, investors are making a speculative bet, not a sound investment.

The deal being sought after by LYFETYMES is set up rather simply. The company has $10,600 already pledged to its name, but it is seeking between $50,000 and $107,000. Investors must put in at least $100 to participate in the deal, but instead of receiving equity or convertible debt, they are getting a SAFE. This SAFE will essentially convert into preferred shares in the next financing transaction.  There are some instances where they can convert into convertible debt as well, but that’s less likely in the long run. The preferred units the SAFE entitles users to do not pay a dividend (unless management claims one). They also have no voting rights except for those guaranteed to preferred holders by the law.

The team at LYFETYMES consists of four individuals as of this writing, but at its core are really two people. The first of these is Katie Cunningham, the company’s Founder and CEO. Prior to her time working on LYFETYMES, she served as Head of Customer Acquisition and Lead Strategy for a top 5 Bank. In all, she has more than 20 years worth of experience in banking and finance. While there, she executed various initiatives and revenue strategies that generated billions of funding and deposit growth. In 2017, she was named one of the 100 Most Innovative Females in FinTech. Working on LYFETYMES with her is Tri Nguyen, the company’s CTO. Nguyen claims to be an expert in building complex digital platforms that provide innovative, technical solutions to solve consumer pain points. He has experience in AI, ML, trigger automation platforms, and he is a UX and website designer.  One of his previous roles was as Managing Partner in an award-winning marketing agency.

At the conceptual level, LYFETYMES is an interesting business that has the opportunity to capture a significant market. It would not be unreasonable, given proper execution, to expect the firm to one day generate tens of millions of dollars in annual revenue, if not more. Having said that, there are significant issues with the business as it stands today. While management has boasted strong growth, for instance, just how big the platform is today is something of a mystery. This could be forgiven if it weren’t for another big shortcoming: the fact that the business, even recently, has yet to generate any revenue. Given that it was founded in 2018, there’s no reason the company could not have, by this point, enabled some advertising on its platform. This suggests either really low traffic on the platform or it’s a sign that management isn’t focused on monetizing what they can today.

This is not to say that LYFETYMES cannot or will not become a success. The company very well could in time. However, at this moment, the business is still very early stage, with no fundamental traction besides its site up. Its business model seems sound, which is a big plus.  On the other hand, the downsides make the risk/reward payoff at this stage appear disadvantageous. For this reason only, investors should tread cautiously as a result. It is for these reasons that the company has been rated an “Underweight” prospect.