The Galactic Adventures team has been selected as an “Underweighted Deal” by KingsCrowd. If you have questions regarding our deal diligence and selection methodology, please reach out to hello@kingscrowd.com.

In recent years, a new opportunity has emerged: the escape room industry. In 2014, there were only 24 locations throughout the US. Today, there are more than two thousand, and globally there are several thousand. This growth presents investors, operators, and fans of these experiences an opportunity. However, there are also a number of challenges inherent about this space. One company looking to establish itself as a major presence, with a plan to open several high-quality locations, is Galactic Adventures.

Over the past several years, the escape room industry has exploded onto the scene. By 2017, the market reached a mature point in the US. This maturity led to increased closures and a necessary wave of evolution for the players involved who wanted to remain in operation. Through its own experiences and expertise, the management team at Galactic Adventures believes it has the right mix to come in, establish itself as a premium provider, and expand, not only to key markets in the US but abroad as well.

It’s important to understand what management believes will make Galactic Adventures so special. To do this, we should first understand exactly what an escape room is. As the name suggests, a certain number of participants (usually between 2 and 12) enter a room, which is locked behind them. They then have anywhere from 30 minutes to 90 minutes to solve various puzzles and other scenarios in order to “escape” the room.

When escape rooms were first established, they were generally simple in nature. Sometimes a single big puzzle or a small role-play like scenario was required in order to complete it. Galactic Adventures has a different idea. The company wants to partner up with content creators in the Sci-Fi genre to license characters, settings, and more. Pairing these familiar characters and settings with interactive technology, the goal is to create a realistic and immersive experience for its clients. 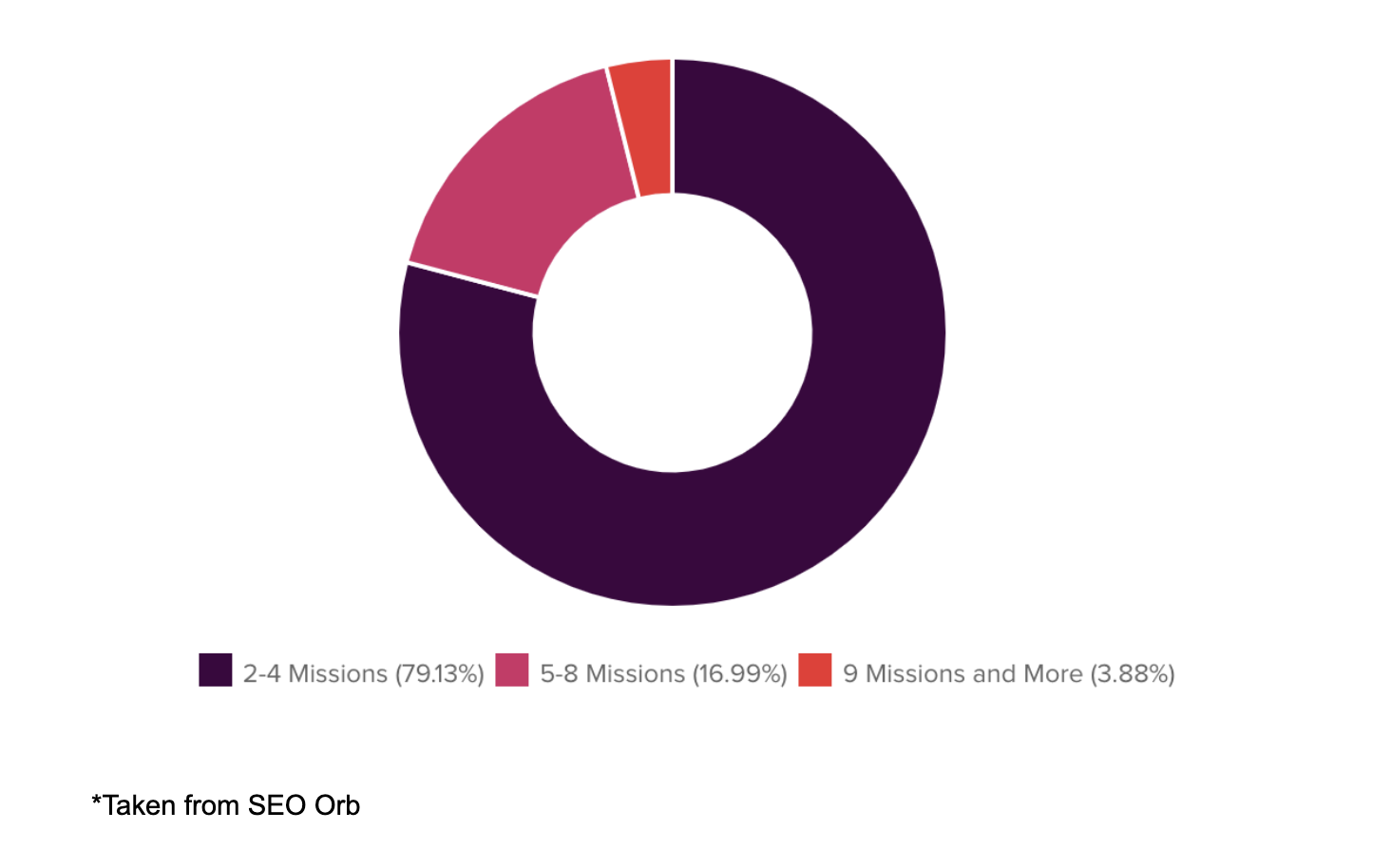 To build its sets, the firm wants to employ a firm called Gratuitous Sets. The company intends to commission the construction of 2 different scenarios through which customers will be able to play. For each scenario, teams of between 2 and 10 individuals will have up to 60 minutes to complete the experience.

Currently, Galactic Adventures is considering a 16,000 square foot storefront in Orlando, which would provide space for the company to open a third scenario after its initial year in operation. Opening a third room would not be shocking by industry standards, as a full 17% of businesses in the space have between 5 and 8 scenarios available. A small percentage (4%) even have 9 or more rooms to offer their clients. Furthermore, rooms are often added over time. An impressive 80.4% of players in the space add one or more scenarios after their initial opening. Galactic Adventures has stated that their third scenario might fall outside the realm of Sci-Fi in its theme and experience. 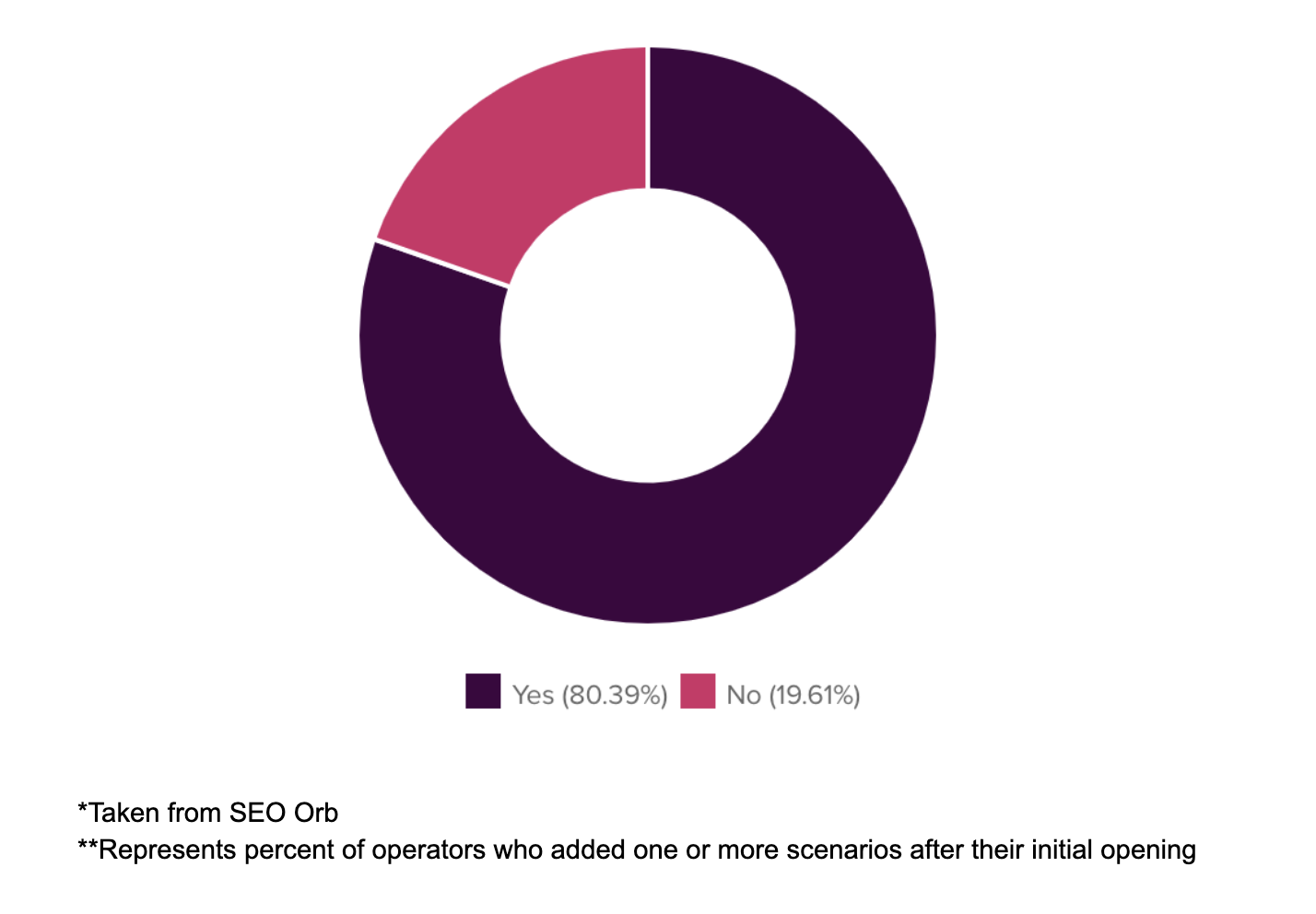 If Galactic Adventures does launch successfully, the company wants to do it big. They intend to spend around $150,000 on creating the experience. To put this in perspective, the industry average in terms of startup costs is generally between $7,000 and $30,000. This expensive, immersive experience will also come with a premium price. Most players in the market charge between $25 and $30 per hour, but Galactic Adventures’ management tentatively wants to charge $40. While this go-big approach can be dangerous, it can also be valuable. Based on the company’s filings, it intends to have the capacity to serve between 160 and 200 customers per day. If that were to occur, Galactic Adventures would generate event revenue of between $6,400 and $8,000 per day. This amount stacks up nicely against the $25,000 in monthly costs the business expects to incur in order to keep operating. However, it is worth noting that full occupancy, or anything close to it, is highly unlikely to happen on a day-to-day basis.

To give itself another edge, management intends to launch an app for its users, allowing them to book events and share content. It will operate as a community for its players, and the progress of the teams currently moving through each scenario will be visible in the app. At the same time, the app will also allow the firm to display videos and showcase events. Offering an app could prove useful because, according to one source, only 35% of escape room owners run social media ads. In addition, mobile booking in the space grew by 22% from 2017 to 2018.

After what it hopes will be a successful launch in Orlando, Galactic Adventures plans to open a new location every 18 months, with the next shop slated to open in 2021 in Las Vegas. By 2030, it hopes to open an 8th location in London, if all goes according to plan. Management has chosen cities that are hot tourist spots. This choice is a double-edged sword, though, because many of those cities are also the ones where the most escape rooms currently operate. Throughout all of Florida, for instance, there’s an estimated 181 escape rooms already in operation. In California, that number is 274. The low cost of construction makes these firms a dime-a-dozen. Management hopes to position themselves as a quality operator in an attempt to distinguish themselves from the competition.

One really negative aspect about Galactic Adventures is the firm’s operating history. Although management has extensive experience in the industry and two of the firm’s shareholders are well-known names in the Sci-Fi market (Walter Koenig and Nichelle Nichols of Star Trek fame), there is little substance beyond that. Currently, the firm has essentially no operations. Last year, Galactic Adventures generated no revenue at all, yielding a net loss of $110. The firm has no assets or liabilities to show.

Some markets take decades to grow and mature while others take only a very short period of time. The escape room industry seems to fall in the latter category. Back in 2014, there were only 24 escape rooms across the US. By August of 2019, this figure had grown to 2,350. As the image below illustrates, the growth rate seen in this space has slowed remarkably after just a couple of years into the movement. It is worth reiterating that this covers only the US. In Europe, it’s estimated that there are around 3,000 escape rooms. Globally, that number balloons to around 14,000. 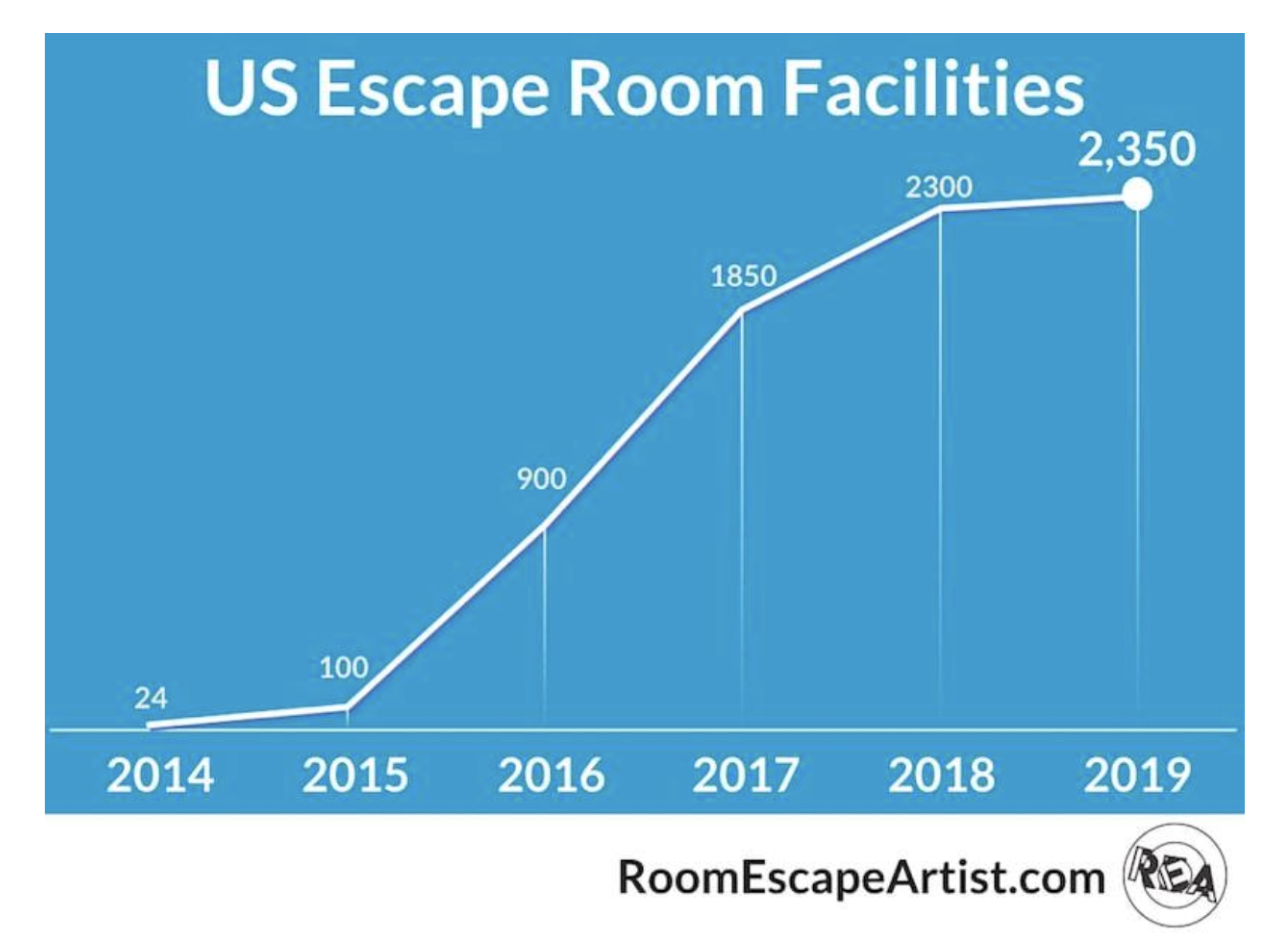 While not all 2019 figures are out yet, 2018 figures should serve us well. In 2018, the average annual revenue in the space was $317,571. This figure was up 22% from the $256,860 per year seen in 2017. These numbers may make it seem like the opportunity is still robust. However, all that appears to be happening is a movement from the quality operators from the low-quality ones. What is really interesting is that around half of all the players in the US generate between $100,000 and $500,000 in revenue. Just to break even, Galactic Adventures will have to fall into the upper range, since its annual run-rate costs are forecasted to be around $300,000.

One contributor to the industry’s slow growth in the US has been the number of closings in the market. In 2017, there were 80 closures in the space, which grew to 261 in 2018. Between January of 2019 and August of 2019, closures already totaled 247, and a rate comfortably exceeding 300 for last year is not unrealistic. Many of those that do close in the US are less-complex, less-sophisticated operations, but this doesn’t mean the big players have been immune to the pain. Two of the five largest US operators saw their escape room facility count drop. In particular, one operator went from 35 locations to 28, and another decreased from 37 to 28. In fact, over the first five years for which data was available, a full one-third of all locations shut down. 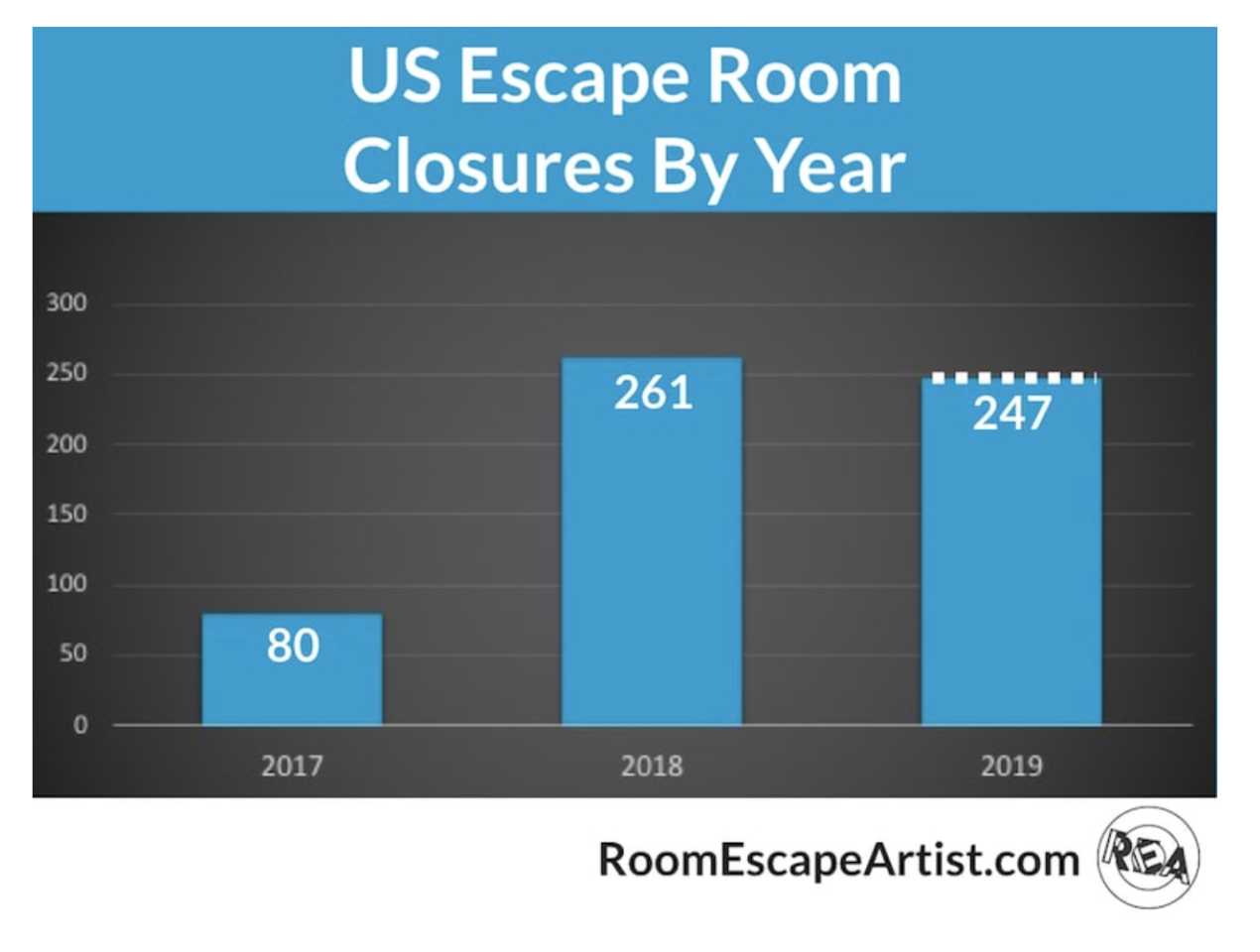 No formal market size could be drawn from another source, but it is possible to provide a realistic estimate. Using the average revenue per player in 2018, it comes to around $746 million in sales in the US. This number implies that a reasonable estimate for the country would be somewhere between $700 million and $850 million in size. If applied internationally, this figure could grow to as much as $4.45 billion with a range between $4 billion and $5.5 billion, assuming that pricing overseas is comparable to pricing here at home.

The transaction desired by the management team at Galactic Adventures is fairly simple. The firm is currently selling preferred shares in itself at a price of $5 per share. The minimum contribution required per participant is set at $100. As of this writing, the company has $35,190 committed to its transaction. In order to meet its goal, though, it must raise a great deal more. The firm’s objective is to raise between $100,000 and $500,000 through this raise. The pre-money valuation assigned by management is a hefty $5 million, quite high for a company with no operating history.

There are several individuals involved in the creation of Galactic Adventures. Even so, three individuals appear to be the most material. The first of these is Ray Tesi, the President of the firm. Tesi currently serves as the owner of Neutral Zone Studios, a sound studio turned Starship Enterprise set for visitors to explore. Prior to his time working on this, he worked (and still does work) as a Senior VP at Worldata InfoCenter. Another key player at Galactic Adventures is James Girardi, the firm’s VP. Previously, he was a VP at a DC-based information technology firm, and he has served as the Director of Nova Labs. Though not an executive at Galactic Adventures, another key member of the team is Sky Conway. He has served as an Executive Producer for at least two films: Star Trek Renegades and Inalienable.

After careful evaluation and consideration, Galactic Adventures has been rated an “Underweight Deal.” The company’s decision to open a Sci-Fi oriented escape room that offers an immersive, quality experience is interesting. In fact, it could probably gain an attractive following if done right. There are, however, several downsides to the deal. Specifically with this company, there is the issue of valuation. A $5 million pre-money valuation for a firm with no revenue and no assets is incredibly high. Another concern involves content and licensing. That’s a tough space to be in, and there’s a lot of uncertainty over what the cost of such licensing could be.

Outside of the company-specific issues, there are plenty of industry-specific ones to consider. It appears that growth, at least in the US, is slowing down. Add in the fact that management intends to open in markets already filled with competitors, and the issue of competition becomes very real. Recent industry closures also indicate that there’s pain among operators, including some of the big players in the market. All of this, taken together, makes Galactic Adventures a rather unappealing prospect. As such, investors should exercise caution when deciding whether or not to invest in it at this time.