The Land Betterment Corporation team has been selected as an “Underweight Deal” by KingsCrowd. If you have questions regarding our deal diligence and selection methodology, please reach out to hello@kingscrowd.com.

Economically, there are wide disparities across the US. While some regions are thriving in this day and age, others are just struggling to get by. Case in point, Appalachia. Once known as coal country, the region has fallen on hard times. Metallurgical coal has suffered due to competitive pressures from China. Thermal coal demand, meanwhile, has plummeted as the US moves away from it in favor of cleaner power sources. These factors combined have resulted in Appalachia losing much of its previous wealth. 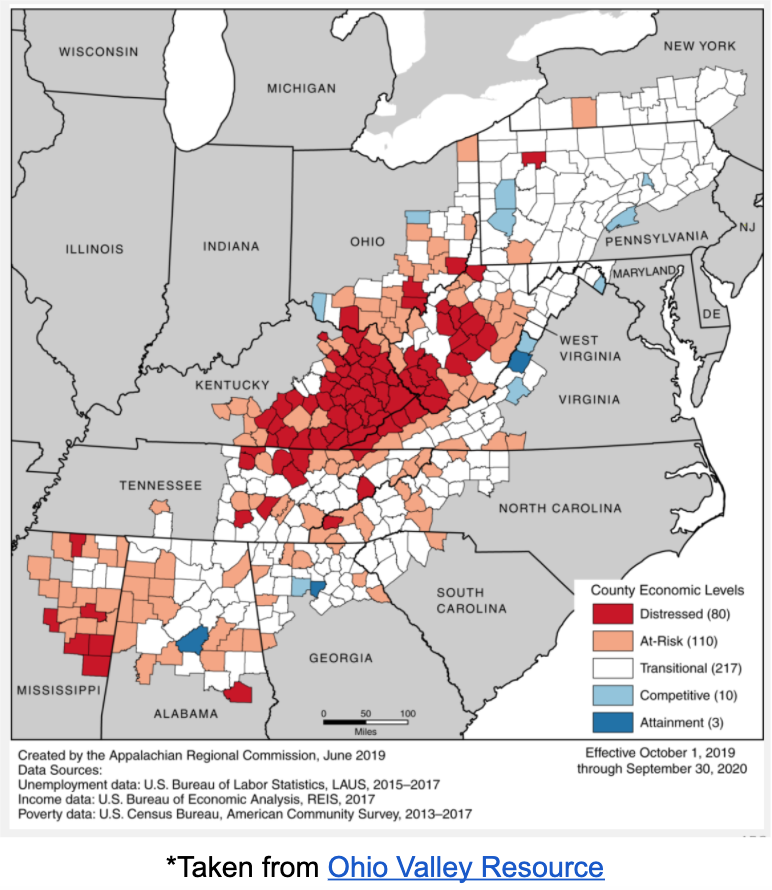 Although decimated economically, the region has crawled back some. In 1960, the poverty rate for Appalachia averaged 31%. This narrowed to 16.3% by the end of 2017 (the last year that info for the region as a whole is available). Even so, that rate is 1.7% higher than the national average.

That seemingly-small disparity is misleading though.It becomes clear that Appalachia is still very much in trouble when you take things county by county.  Eighty of Appalachia’s 420 counties were labeled distressed in 2019. Another 110 are considered at risk. Only 10 counties (less than 1% of the region) are ranked as competitive with the nation’s highest-performing counties. Just three others have been listed as having attained that high-performing status.  With so much land destroyed by mining activity and an absence of funds, each step on the road to improvement is a struggle for Appalachia.

One company dedicated to helping Appalachia is Land Betterment Corporation. At its core, the business focuses on acquiring lands that have been stripped and largely abandoned by mining companies. It then restores those lands so that they can be used for more sustainable purposes. The end goal here is to revitalize local economies while creating value for the company’s shareholders. Much of Land Betterment’s emphasis surrounds coal. Coal mine remediation and coal refuse processing are two key aspects of their environmental rehabilitation efforts. They also use water treatment and technology to ensure clean waterways.

Land Betterment Corporation has tried to create an all-encompassing land reclamation strategy. They want to create communities and jobs as they improve the environment. To that end, they developed a six part approach. Using the land itself, Land Betterment creates housing developments and farms. The housing developments (called ekō villages) are built with ecologically friendly modular homes. The farms are meant to provide direct-to-consumer food for the communities. Additionally, some of the farms will provide the crops needed for another Land Betterment effort, COAL Craft Spirits. This brewing company produces small “farm to bottle” batches of various liquors, including bourbon, gin, and apple brandy.

Lastly, Land Betterment also has plans to create organic bee farms. With environmental recovery and sustainability at the core of their goals, it makes sense for them to expand into bees as well. They are currently in the process of creating the first of these farms.

At the end of the day, what Land Betterment envisions is not a single business. It’s an ecosystem of businesses built on and using the land it rehabilitates. This approach is an excellent initiative which also differentiates the company. In addition, Land Betterment claims to have received a $6.6 million term sheet for New Market Tax Credit financing for its Betterment Mulch division. It is also applying for $85 million in additional public capital, but there is no guarantee they will receive any of it. In fact, the only thing the company does have guaranteed at this moment is a $100,000 per year, 5-year contract for its Betterment Metals segment.

A review of Land Betterment’s financials reveals that the company has generated nothing in the way of revenue. It also has no recorded losses because it does not have any expenses. Its balance sheet is similarly empty, revealing no assets and no liabilities. This is where the company becomes an issue for prospective investors. Land Betterment is not a company in the sense of having actual business activities. Or at least it wasn’t by February of this year. It’s a shell corporation and management is playing with the aforementioned concepts with the hopes they can make each of them launch. Such an initiative is bold and it could be transformative for Appalachia. However, it also creates a business that is difficult to set up and run.

Land Betterment pitches itself as a land rehabilitation company. However, the company intends to become profitable through its six interconnected efforts. In order to analyze the potential market for Land Betterment, then, each of these niche areas must be considered.

First, consider the modular homes business. In the US, this industry is estimated to be worth about $16.1 billion this year. The expectation is for this space to grow at an annualized rate of about 4.6% until, in 2024, it reaches $19.3 billion in size.

Then there is COAL Craft Spirits. The US craft spirits industry is currently worth about $8.7 billion. Its projected growth rate through 2023 is forecasted to be 32% per annum. If this comes to fruition, the industry will reach a size of $20 billion by the end of the forecast period.

Another small market is the mulch industry. US-only data here could not be found, but the global market for the space is estimated to be worth about $3.8 billion. Between 2020 and 2024, the industry is forecasted to grow by 6.8% per annum, eventually hitting just shy of $5 billion. The US metal recycling industry, meanwhile, is considerably larger. Right now, that space is worth about $29.9 billion, but it posts a rather disappointing growth rate of 3.2% per year.

The largest market that Land Betterment is playing in is agriculture. More than a century ago, in 1900, agriculture accounted for about 41% of the nation’s workforce. That declined to 1.9% by the turn of the last century and today it’s even smaller. As far as GDP is concerned, its contribution is around $200 billion per year, amounting to less than 1% of the nation’s output. Last but not least, the firm’s prospective bee farm activities. This space is estimated to be worth about $8.2 billion today. With an annualized growth rate of 4.8%, it should reach $10.3 billion by 2025.

At this time, Land Betterment needs to raise money so that it can really start up its business operations. The amount of funding it is seeking at this time is $1.07 million, but it will close a round with as little as $25,000. Investors in the company will receive common stock priced at $7 per share. In order to participate in the round they must contribute at least $100. Despite having an interesting concept, the company has only raised $2,735 as of this writing. Part of this problem might come back to valuation. Management is currently seeking a pre-money valuation of $70 million. That’s off the charts for a company with no revenue and no assets to back it. Investors are paying a high price for little more than the idea management has presented and the $6.6 million tax credit term sheet they have received.

Land Betterment’s founding team consists of four individuals. The first of these is Mark Jensen, the company’s Executive Chairman. He is also the founder, CEO and Chairman of American Resources Corporation, a company that manages four mining complexes spread across two states. He is also the founder and Managing Partner and Portfolio Manager of T Squared Capital, an investment company.

Another key member is Kirk Taylor, Land Betterment’s President and CFO. He also holds the position of Director at the company. Simultaneously, he works as the CFO at American Resources Corporation, and before that he was a Manager at K.B. Parrish & Company.

The third main member of Land Betterment’s management team is Thomas Sauve. He works as the firm’s Chief Development Officer and serves as one of its Directors. He also works at American Resource Corporation, serving as the company’s co-founder, President, and Director. Additionally, he has experience as the co-founder and Portfolio Manager at T Squared Capital.

The last main person involved with Land Betterment is Mark LaVerghetta. He is the company’s Chief Governance Officer and head of Corporate Finance. He also currently serves as the Vice President of American Resources Corporation. Prior to that post, he worked as the VP of Institutional Sales Trading and later as VP of Institutional Equity Sales at Avondale.

Land Betterment’s vision is attractive and the thought of doing a lot of good in a region that has been economically devastated has a certain draw to it. That’s what makes our rating for the deal as an “Underweight” prospect that much more difficult. Making money is an excellent aim in business, but making money while improving the world is even better. Sadly, the odds look stacked against management at this time. Despite spending years on this concept, Land Betterment has little to show for it. They acquired the Landree Mine in 2019 with the aim of upcycling it, but the property is not listed on their balance sheet. In fact, nothing is.

The firm also has nothing in the way of revenue. All it seems to have is a set of business ideas centered around its core concept. But since all of these are incubating/in development, it’s safe to say that they are untested. If the company were trying to raise money at a much lower valuation, perhaps in the range of $3 million to $6 million, then it might be an interesting prospect. But a firm with nothing significant to show investors today with a $70 million pre-money valuation looks preposterous.